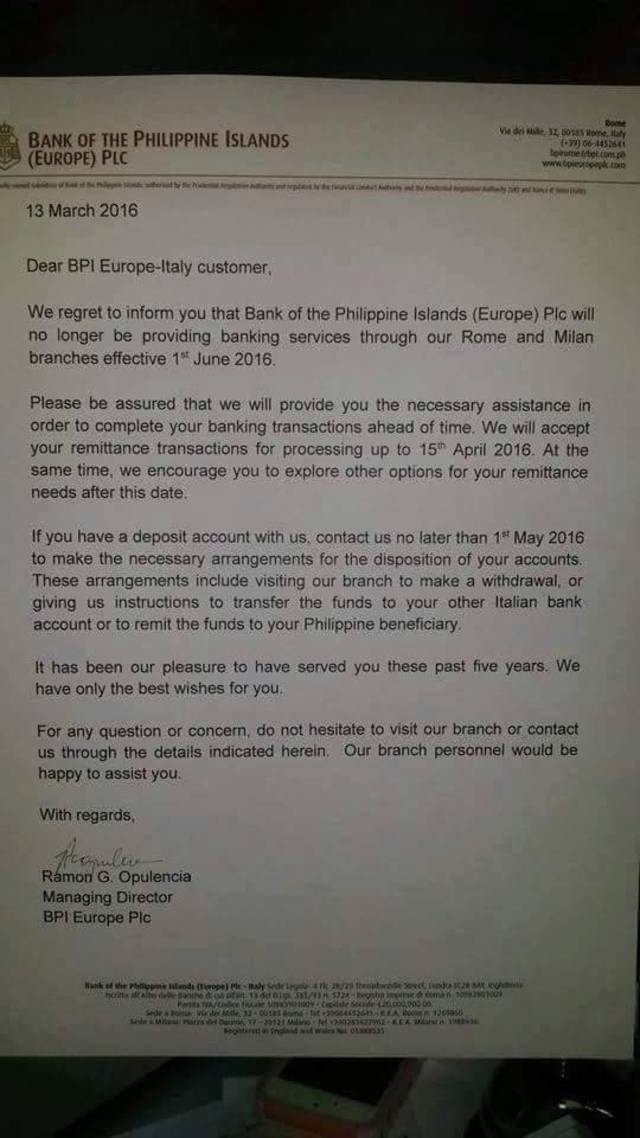 Facebook Twitter Copy URL
Copied
(UPDATED) In December 2014, RCBC's remittance company in Italy faced a hefty fine of $74,445.10 for its failure to comply with the country’s stringent anti-money laundering enforcement

MANILA, Philippines (UPDATED) — Italy has one of the strictest anti-money laundering enforcement in Europe, with most Philippine remittance companies unable to comply, leading to the closure of their shops. (READ: DOF fears closure of remittance shops abroad amid $81M heist)

In its effort to erase ambiguities and improve consistency in its legislation, the European Union (EU) just published its 4th anti-money laundering (AML) directive last March 20, 2015.

With broader scope of crimes and professions covered, the new directive just made it harder for local banks with remittance companies to enter and do business in the region.

Rizal Commercial Banking Corporation (RCBC), Bank of the Philippine Islands (BPI), Metropolitan Bank and Trust Company (Metrobank), BDO Unibank Incorporated, Land Bank of the Philippines, and the Philippine National Bank (PNB)  have closed their remittance operations in Italy in the past couple of years, after their partner international banks severed ties with them, as told by Task Force OFW in Italy.

In December 2014, the remittance company of RCBC in Italy faced a hefty fine of $74,445.10 (P3.413 million) for its failure to comply with the country’s stringent anti-money laundering (AML) enforcement.

Subsequently, RCBC Telemoney Europe S.P.A was forced to end its remittance operations because of an order issued by the Banca d ’Italia, the central bank of Italy, on February 23, 2016.

“It has closed its remittance operations in Italy because it could not meet on time the computer systems capabilities required of it by Banca D’Italia since 2014,” Manny Narciso, RCBC Global Transaction Banking head, said in a statement.

But a look at the directive orders of the Italian central bank showed it is more than that.

“By decision of 23 February 2016, the Bank of Italy ordered, pursuant to art. 113, paragraph 1, of the Banking Act, as referred to in art. 114 of the Consolidated Act, the revocation of the provision of the RCBC Telemoney Europe S.P.A. payment services, with headquarters in Rome,” Banca d ’Italia said in Italian in its February 2016 order.

Meanwhile, BPI Europe Plc has informed its customers that it will close its Rome and Milan branches effective June 1 this year.

“In compliance with anti-money laundering and other UK regulations,  BPI (Europe) Plc is currently requiring all of its clients to update their records with us,” BPI said in a statement.

Emmanuel Geslani, a recruitment and migration expert, said in a separate statement that Task Force OFW in Italy reported to him that Landbank closed shop over a year ago, while Metrobank, BDO, PNB followed suit.

“They were forced to close shops in Rome and Milan when their correspondent international banks in New York terminated their agreement in remit the funds of Filipino workers,” Geslani said.

BDO, however, clarified in a statement that it “has a strong remittance operations in Europe, including Italy via its strategic partnership with CBN Grupo.”

The migration expert said he was told by the Task Force OFW in Italy that the banks also complained about the high taxes in operating their branches and pressure of the Italian authorities to limit their operations in the remittance operations.

These developments are indirectly related to the Philippines’ involvement in the heist as these took place before March 2016 – months before the money laundering case perpetuated by hackers who broke into the account of Bangladesh Bank with the Federal Reserve Bank of New York happened.

But for the Department of Finance (DOF), more remittance operations of local banks might be forced to close abroad due to the country’s exposure in the Bangladesh Bank fund heist.

“That is bad news to our roughly 12 million OFWs (overseas Filipino workers). And that is only one example of problems we may be creating for ourselves over an isolated situation,” De Ocampo, who is also a former finance secretary, said in a statement.

“Unfortunately for us, it has become a global spectacle. Unfortunate because as the investigation, aired live on television, drags, unintended consequences are starting to emerge and be felt across the board,” he added.

De Ocampo said that “if we continue on this path, the gains we have had in the past will be at risk: our credit rating, foreign investments, economic growth and even our international banking and financial operations.”

Finance Secretary Cesar Purisima said the Anti-Money Laundering Act should be reformed as soon as possible, as it “will send a message to foreign banks that OFW remittances should not be confused with the dirty money.”

It will also “show our OFWs that we are serious about protecting their hard-earned money,” Purisima added. – Rappler.com