Turnover of Bangladesh’s missing millions will ‘take a little time’ 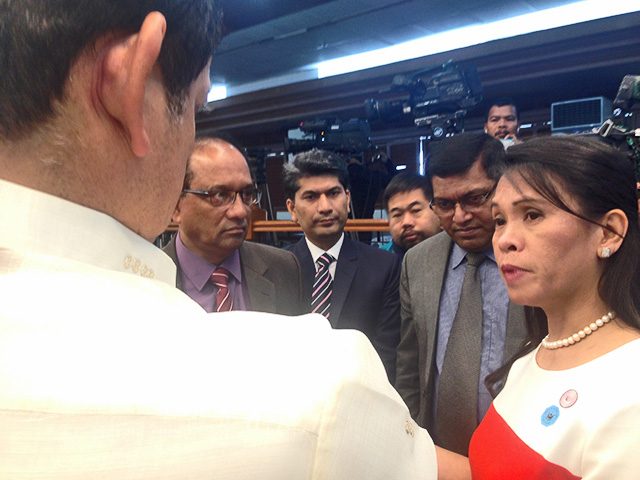 Facebook Twitter Copy URL
Copied
$5.46 million may have been returned by Kim Wong, but the money is still not with the Bangladesh government

MANILA, Philippines – It will “take a little time” before the central bank of Bangladesh – a lower middle income nation and one of the world’s most densely populated countries – can take back a portion of its missing millions. (READ: Bangladesh envoy dismayed, witnesses stonewalled at 4th Senate probe)

Bangladesh Ambassador to the Philippines John Gomes on Tuesday, April 5, had demanded the immediate turnover of the $4.63 million and P38.28 million ($830,595.50) returned by casino junket agent Kim Wong – a total of around $5.46 million.

The $5.46 million, which was delivered to the Anti-Money Laundering Council (AMLC) for safekeeping, is just about 7% of the $81 million stolen from Bangladesh Bank’s account with the Federal Reserve Bank of New York.

“The turnover will take a little time, but we are working with AMLC for expediting the process,” Gomes told Rappler in a text message, saying his camp “will meet with AMLC” regarding the status of the returned funds.

Unidentified hackers stole $101 million from Bangladesh Bank in February in an attempted heist of about $1 billion. Sri Lanka has returned $20 million, but most of the money sent to the Philippines remains missing. (READ: How Bangladesh Bank dirty money easily got into PH)

Initially, Gomes was happy that Wong returned some of the stolen funds, saying “it is a step in the right direction.” (READ: 6 things we know about RCBC money-laundering scam)

But the mood changed when Gomes was not able to get the $5.46 million on Wednesday, April 6. He had been expecting to send it onward to the Bangladesh government on the same day.

This was after he signed an acknowledgment receipt, saying that the Bangladesh government received about 7% of the stolen $81 million. (READ: TIMELINE: Tracing the $81-million stolen fund from Bangladesh Bank)

“So what do we do now? You called me that I must come now. You said: You have to receive it [acknowledgement receipt] and you have to sign it. You told us that we have to count each dollar for two days,” Gomes said at the end of the fourth Senate hearing on the Bangladesh Bank fund heist on Tuesday, April 5.

But according to Philippine laws, without a written consent from Wong, the recourse would have to be a civil forfeiture case in court, which is set to be filed by AMLC next week, its executive director Julia Bacay-Abad said.

During the fourth hearing, Wong told the Senate that he agreed the money had to be turned over immediately. But his lawyer advised otherwise, saying they have to follow proper procedure.

“It appeared now that they [Wong’s camp] only want to turn over to AMLC, but our understanding before is that they are willing to give it back to Bangladesh,” Bacay-Abad said.

“We’ve been counting for so long and why were we counting this money? For nothing? It’s all in the newspaper also!” the ambassador said to Bacay-Abad on the sidelines of the fourth Senate hearing.

Aside from the $5.46 million returned by Wong, the casino junket agent also promised to surrender another P450 million within 15 to 30 days.

Philippine senators also urged the operators of Midas Hotel and Casino as well as Solaire Resort and Casino to return the dirty money to Bangladesh Bank.

Of the stolen money, Wong said that about $63 million went to Solaire and Midas, while the remaining $17 million is supposedly still with PhilRem – a claim denied by the company’s officers. – Rappler.com