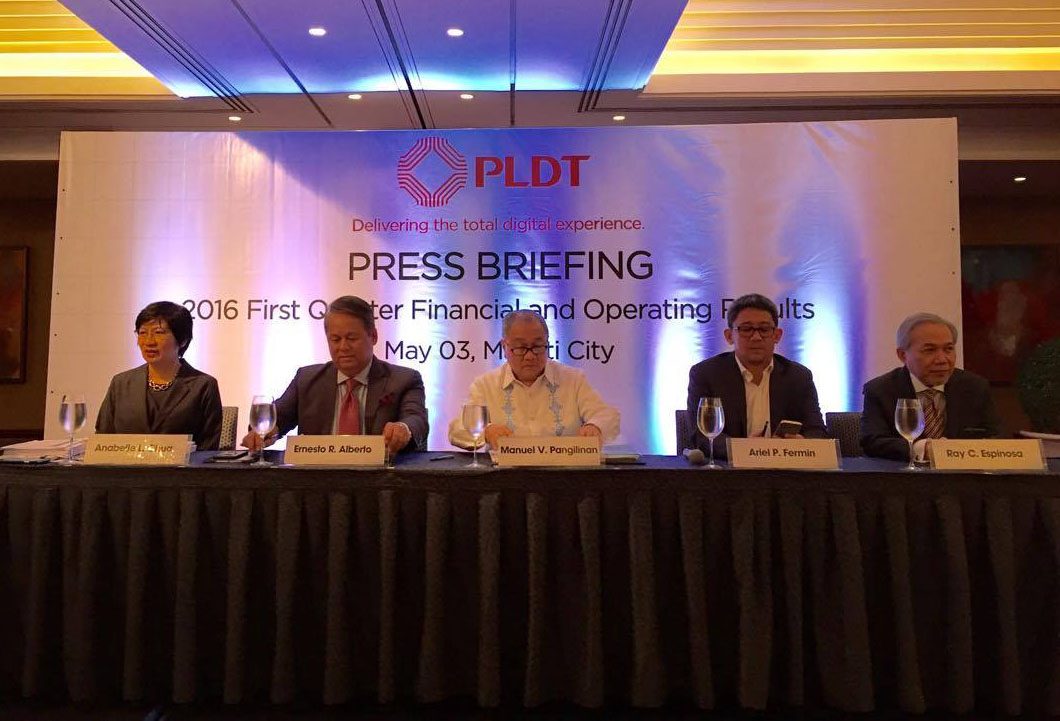 MANILA, Philippines — The head of Philippine Long Distance Telephone Company (PLDT) said the 34%-decline in its net income in the first quarter of 2016 reflects the “difficult and complicated” process of its digital pivot.

This was after the country’s largest phone carrier saw its net income decline by 34% to P6.2 billion, from P9.4 billion in the same period last year. (READ: PLDT drops ‘long distance,’ soon to be called PLDT, Inc)

It comes after it booked P1.6-billion asset impairment from investment in Germany’s Rocket Internet. PLDT owns 6.4%-stake in Rocket Internet – one of its efforts to build up its digital muscle.

Amid its digital transition, PLDT said it is maintaining its core net income guidance for 2016 at P28 billion.

The Pangilinan-led telco saw its core net income slide by 22% to P7.21 billion in the first quarter of 2016, from P9.28 billion in the same period a year ago.

“Our experience in the fixed line business shows how growth can be restored by progressively building up our data and broadband revenues to a critical mass,” Pangilinan said.

PLDT also opened 2016 with a surge in capital spending budget.

Its consolidated capital expenditures (CAPEX) for the first quarter amounted to P14.6 billion, more than 4 times the CAPEX for the same period in 2015.

“Our significantly higher CAPEX in the first quarter of 2016 underscores the seriousness of our efforts to strengthen our fixed and mobile networks as the first leg, indeed, the foundation of our digital pivot,” Pangilinan said.

The chairman and CEO promised PLDT subscribers that they will “progressively feel the impact of this network transformation over the next several quarters.”

Is it too late?

“The shift to data is evident in both fixed and wireless businesses, but the transition in the former started much earlier, in the early 2000s,” PLDT said. (READ: PH telcos, TV networks ride double-edged digital wave)

The telco said the tipping point came between 2011 and 2012, when the fixed line business started on its current growth path, riding on growth of consumer and enterprise data as well as broadband, which crossed the 50% mark in its share of total fixed revenues in 2013.

“We are accelerating that transition by assembling best-in-class digital services through partnerships and internal innovation, promoting the adoption of smart phones, and combining the reach and power of fixed line and mobile services to deliver the best and most complete digital experience,” said Ariel Fermin, PLDT executive vice president and head of the Consumer Group.

Pangilinan said PLDT lost 400,000 subscribers in its wireless cellular and broadband businesses in the first quarter. “160,000 was due to clean up of Sun and the 240,000 we’ve lost to [our] competitor,” he added.

“Finally, by combining the strengths of our fixed and mobile networks, and the resources of our Consumer and Enterprise Groups, PLDT is uniquely positioned to deliver B2B2C services, and thus become the truly digital telco of everything – not just a digital mobile service provider,” Pangilinan said.

After disclosing its quarterly report, PLDT shares closed at P1,721, up by P31 from Monday, May 2. – Rappler.com