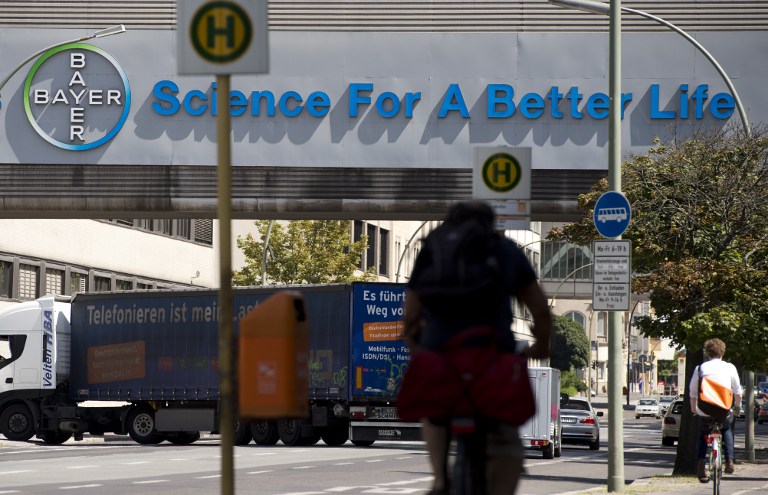 FRANKFURT, Germany – German pharmaceuticals giant Bayer and the US group Monsanto said Thursday, May 19, they are in talks on a possible merger to create a global player in pesticides, seeds, and genetically modified crops, following weeks of speculation about a possible tie-up.

“Bayer executives recently met with executives of Monsanto to privately discuss a negotiated acquisition of Monsanto Company,” the Leverkusen-based company said in a statement.

Monsanto, for its part, “disclosed … in response to recent media reports that it has received an unsolicited, non-binding proposal from Bayer AG for a potential acquisition of Monsanto, subject to due diligence, regulatory approvals and other conditions.”

But both sides emphasized that the talks were still only exploratory at this stage.

Neither mentioned how much any proposed deal would be worth.

But with Monsanto’s market value estimated at around $42 billion, observers say it would be bigger than the recent acquisition of Switzerland’s Syngenta by China National Chemical Corp.

“There is no assurance that any transaction will be entered into or consummated, or on what terms,” Monsanto said, while Bayer insisted the talks were still only “preliminary” and “a further statement will be made as appropriate.”

A combination would create a new giant in the seeds and pesticides sectors.

Agricultural suppliers like Monsanto have been pressured by low commodity prices that have caused farmers to cut orders for supplies. In March, Monsanto slashed its earnings forecast for 2016.

Sluggishness in the industry has also sparked deals such as a mega-merger between DuPont and Dow Chemical.

Following its unsuccessful bid for Syngenta, Monsanto, which is based in Saint Louis, Missouri, embarked on a huge restructuring program, axing 3,600 jobs, or 16 percent of its workforce by 2018, closing sites and writing down assets.

Monsanto is a major manufacturer of agricultural seeds and herbicides and employs about 20,000 workers and it describes itself as one of the world’s leading biotechnology companies.

The US group has been in the headlines in Europe recently over the weedkiller glyphosate, which it markets under the name Roundup, and is suspected of causing cancer in humans and posing a serious risk to biodiversity.

The EU pesticides committee was meeting this week to decide whether to extend glyphosate’s license.

The Wall Street Journal had quoted informed sources overnight as saying that Bayer and Monsanto were in talks.

A report by Bloomberg News last week had fed similar speculation, evoking a purchase price of around $40 billion, causing Monsanto shares to soar and Bayer shares to plummet.

Bayer shares were the biggest losers on the blue-chip DAX 30 index in Frankfurt, plunging 8.3% to an intraday low of 88.39 euros in an overall market down by around 1.5%.

Separate speculation of a possible tie-up between Monsanto and another German giant BASF has also done the rounds recently but has not so far been confirmed.

The analysts therefore felt a deal was unlikely because of the price, as well as possible reservations on the part of the competition authorities towards a combination of Bayer and Monsanto.

According to the Wall Street Journal, the two companies would together account for around 28% of global sales of pesticides and herbicides.

Furthermore, analysts at Credit Suisse suggested that Bayer’s financial firepower was “very limited” after it paid out 10 billion euros for the prescription-free drugs business of US firm Merck in 2014, a deal which has not really fulfilled Bayer’s expectations so far.

Bayer, which employs around 117,000 workers, turned in record profits and sales in 2015, notching up net profit of 4.1 billion euros on sales of 46.3 billion euros.

“The proposed combination (with Monsanto) would reinforce Bayer as a global innovation-driven Life Science company with leadership positions in its core segments, and would create a leading integrated agriculture business,” it argued.

The German group recently floated its former material sciences division on the stock market under the name Covestro and reorganized its remaining pharmaceuticals (both prescription and non-prescription drugs) and agrochemicals operations.

It has also recently changed its chief executive, with Dutchman Marijn Dekkers stepping down early to take up a position at Unilever.

His successor Werner Baumann took over at the beginning of this month. – Simon Morgan, AFP / Rappler.com