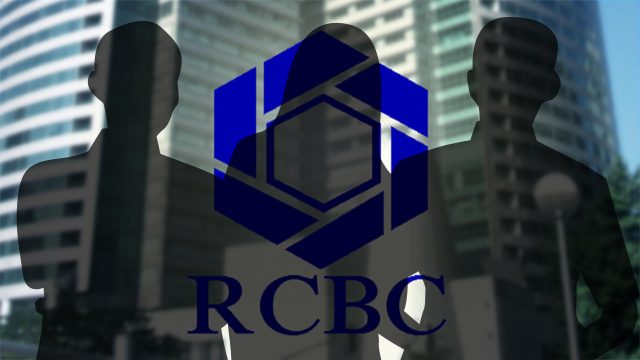 MANILA, Philippines – Rizal Commercial Banking Corporation (RCBC) is filling up key management positions, as it moves on from the $81-million bank heist involving the funds owned by the Bangladesh central bank last February.

Maria Christina Alvarez, corporate information officer of RCBC, told the Philippine Stock Exchange (PSE) on Tuesday, May 31 its board of directors approved the hiring of Chester Luy as its new senior executive vice-president and treasurer.

Luy brings with him over 24 years of extensive experience in banking as managing director and head of corporate finance and structured transactions of the Bank of Singapore.

RCBC also announced to its stakeholders that it also hired Margarita Lopez as first senior vice-president and head of the Digital Banking Group.

Lopez brings with her over 28 years of experience in business operations, process, product, brand, account, and technology management mostly in the banking insurance sector.

She was a member of the Board of Directors and corporate vice-president and Asia head of digital of Manulife Financial.

After serving in various capacities with Philippine AXA Life, Philippine National Bank, and United Coconut Planters Bank, among others.

To strengthen its bank internal auditing, the bank has tapped Samuel Poblete as senior vice president and head of the branch audit group at RCBC.

Poblete brings with him over 31 years of extensive banking experience having served as the chief internal auditor of Philippine Veterans Bank.

He was also previously connected with the Bank of Commerce, Negros Navigation Company, Incorporated as well as SGV & Company.

The bank owned by taipan Alfonso Yuchengco was dragged into the money laundering scandal after it was used as a conduit by hackers who tried to steal $1 billion deposits from the Bangladesh Bank’s account with the Federal Reserve Bank of New York.

However, a total of 5 transactions worth $81 million were consummated through fictitious accounts at the RCBC Jupiter Branch in Makati City allegedly facilitated by dismissed branch manager Maia Santos-Deguito and customer relations manager Angela Torres.

Both employees were dismissed by RCBC while Deguito who dragged resigned president Lorenzo Tan into the scandal is now facing several criminal cases filed by RCBC and the Anti Money Laundering Council (AMLC).

Last May 16, RCBC announced it has tapped seasoned banker Gil Buenaventura to replace Tan whose resignation took effect last May 5 after he was cleared by RCBC’s Board Committee level investigation.

Buenaventura’s appointment is set to take effect on July 1. He was president of Development Bank of the Philippines (DBP).

He also served as executive vice president of Citytrust Banking Corporation and a Citibanker for 18 years where he started as chief of staff to the country head and rose to become vice president, group head and senior credit officer.

The Bangko Sentral ng Pilipinas (BSP) as well as the Senate Blue Ribbon Committee have completed their respective investigations on the money laundering scandal. – Rappler.com