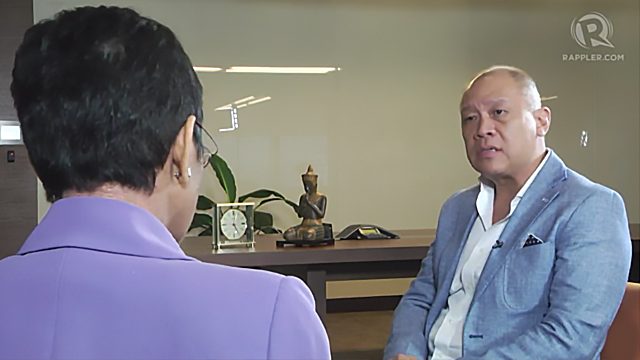 Facebook Twitter Copy URL
Copied
Globe Telecom president and CEO Ernest Cu cites 'extreme difficulty' in getting permits, noting that they had to cut their target for cell site deployment

MANILA, Philippines – The chief of Globe Telecom, Incorporated revealed his two-point wish list for the administration of President-elect Rodrigo Duterte: Set up submarine cables in far-flung areas then rent these out to telcos, and lessen bureaucratic red tape in local government units (LGUs).

“This is what I’ve proposed to the past governments and to the new one: If you want to play the broadband game, the way to play it is through missionary routes,” Globe president and CEO Ernest Cu told Rappler CEO and executive editor Maria Ressa in an interview on Monday, June 6.

Cu was referring to providing connectivity in far-flung provinces like Sulu and Basilan in the Autonomous Region in Muslim Mindanao (ARMM).

“The government of this part of this country, the ARMM, asked us to build sites in their area. If you look at it, Basilan is 20 kilometers from the mainland, while Sulu is 100 kilometers from Basilan. To provide people in those areas with proper connectivity, we need to build submarine cables at great expense,” Cu said.

Each submarine cable costs about $30 million to $35 million, said the president and CEO of Globe.

“That is a great expense to support a very low revenue base,” Cu told Rappler.

“The proposal I made to the government is treat it like just building roads. Build those submarine cables in those so-called missionary routes, then they can rent it to the two telcos,” Cu said.

He added that it does not make business sense for them to build costly submarine cables in those low-revenue regional markets, as they “need to recover investments within a short period of time.”

“The government should have a longer period of time. If we pay them a decent amount of money for the rent, the government can recover [its investments] in, let’s say, 20 years to 25 years. It should be alright,” Cu said.

In some countries, like Vietnam, the government builds platforms for telco infrastructure then rents them to telcos, according to Cu.

“What I’m saying is, there are many places that don’t make sense for us to supply from a business point of view, but is necessary for the people there,” he added. According to Cu, Globe initially targeted to deploy a thousand cell sites a year to address the growing demands of its subscribers.

But due to the telco’s “extreme difficulty” in getting permits, Cu said Globe only manages around 450 cell sites a year. (Watch the entire Rappler interview with Cu here.)

“We tried to build a thousand per year, but it is pain getting permits to do so. It averages 25 permits per cell site,” Cu said.

The Globe president is calling on Duterte to lessen red tape for telcos needing to roll out infrastructure.

“They (Duterte administration) seem quite receptive to the idea. How can you argue with that? Fiber is the lifeblood to data,” Cu said.

He added that LGUs should follow the city of Manila in terms of speed of issuing permits.

“A good example is Binondo – a place with high net worth. Within a couple of weeks, Mayor [Joseph] Estrada gave us permit to deploy a cell site. Once we get this kind of behavior by the LGUs moving forward, we will be glad to provide more cell sites.”

Cu said it is “boon for the country” that Globe and PLDT now have the right to use the 700 MHz spectrum as they can easily turn on new cell sites. (READ: Telstra-San Miguel venture a bumpy, costly ride – think tank)

“Now, [in building cell sites], we just have to seek permission to set up antenna, which is a small hurdle compared to setting up a brand new tower,” Cu added.

Using its existing towers, Globe said it plans to “roll out initially about 200 sites using the 700 MHz frequency.” – Rappler.com