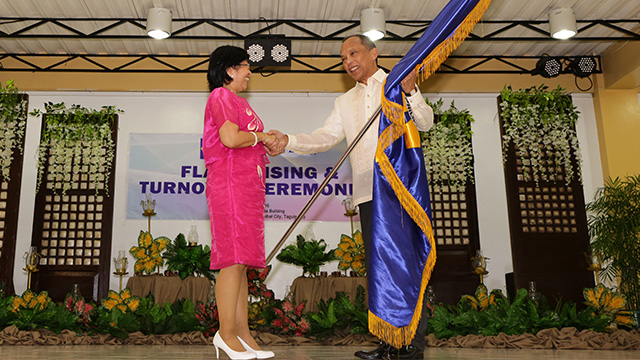 Cusi told the media after the Department of Energy (DOE) turnover ceremony in Taguig City that these two long-term goals will be achieved before President Rodrigo Duterte’s term ends in 2022.

“Reduce power rates. This is our desire and I’d like to make it possible and we will work for it,” Cusi said on Monday, July 4.

Electricity prices in the country are the second highest in Asia, next to Japan.

Based on a 2012 study conducted by International Energy Consultants on 44 countries, power rates charged by the Manila Electric Company (Meralco) ranked 2nd highest in Asia and 9th in the world.

Cusi said in his first 100 days, his team will assess existing service contracts and methods to bring down the cost of electricity.

“We are second to Japan in terms of the highest electricity rates. That’s one concern that we would like to really address,” Cusi told reporters.

“The first 30 days will be spent through consultations to determine why we have these problems. We need to solve that immediately,” he added.

Aside from lowering power rates, reaching full electrification of Philippine households is another legacy that Cusi wants to leave behind.

(I want to deliver the necessary services to our less fortunate countrymen. I’m definitely looking at informal settlers’ plight because they do not have proper electricity connection.)

The biggest gaps are in small villages in far-flung areas, which are difficult to connect to power grids in the more developed parts of the country like Metro Manila.

“First thing we’re going to do is 100% electrification of Philippine households,” Cusi said. “Informal settlers or the less privileged members of the society… We are going to make sure that electricity is delivered to them properly, and they are not charged more than what is the official rate.”

The country’s electrification profile shows that 90% in Luzon have power, 92% in the Visayas, and 72% in Mindanao.

No place for drugs and corruption

In line with Duterte’s policy directives, Cusi also said he will see to it that corruption, drugs, and criminality will have no place within the DOE.

“Kung may adik-adik dito sa amin kailangan mag-bagong buhay na (If there’s a drug addict in our organization, he or she has to change),” Cusi said.

“On criminality and services to the people, we have to begin it here individually, collectively, and as an institution,” he added.

From 1972 to 1990, Cusi served as director in the shipping business of the Aboitiz family. He then became chairman of Batangas-based shipping company Starlite Ferries Incorporated.