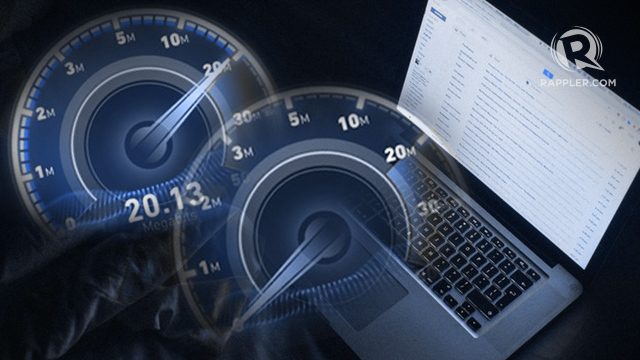 MANILA, Philippines – President Rodrigo Duterte threw a bone to millions of Filipino netizens clamoring for better internet service, promising them on Monday, July 25, that it will be faster and free in most public areas.

“I have ordered the newly created Department of Information and Communications Technology (DICT) to develop a national broadband plan to accelerate the deployment of fiber optic cables and wireless technology to improve internet speed,” Duterte said in his first State of the Nation Address (SONA).

The new DICT office was created at the tailend of the Aquino administration. Duterte has since appointed his former law classmate, noted IT legal expert Rodolfo Salalima, to be its first head.

The government hit the ground running on that score with it signing a deal with PLDT earlier this month to provide free Wi-Fi service at NAIA terminals as well as other transportation hubs within the first 100 days of the new administration.

PLDT has promised that speed would be up to one gigabit per access point.

The state of the country’s internet has been a major sticking point in recent years, with the average speeds last year lower than 7 other ASEAN neighbors including those with a lower GDP per capita such as Laos, Myanmar, and Cambodia. The previous government took steps last year setting a minimum advertised speed of 256 Kilobytes per second (Kbps) for broadband internet at least 80% of the time, or 24 days in a month. (READ: New Internet speed minimum throwback to ’90s?)

One often highlighted point is the lack of choice consumers have in internet service providers or ISPs with the market dominated by Globe Telecom and PLDT.

Both telcos are currently embroiled in a dispute with the Philippine Competition Commission over a deal with San Miguel Corporation that would hinder the arrival of any more players. – Rappler.com