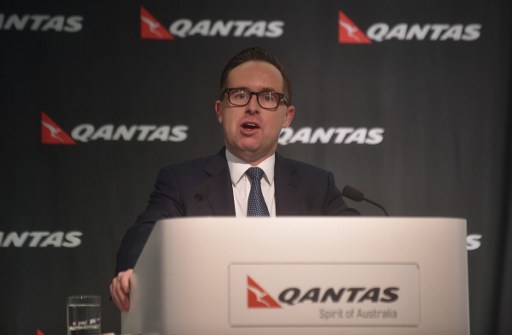 The results were also boosted by the sharp fall in global oil prices and a less competitive domestic market that has given the firm a stable base of earnings.

Other international airlines such as Cathay Pacific, ANA, and Japan Airlines have seen profits plunge amid intense competition from lower-cost rivals and as terrorism fears eat into demand.

Qantas reported a net annual profit of Aus$1.42 billion (US$1.08 billion) in the year to June 30, an 80% increase from the previous corresponding period.

The company resumed paying dividends of 7 cents per share, the first payout since 2009 and announced a share buy-back of up to Aus$366 million. Qantas also said it would give a Aus$3,000 one-off bonus to some 25,000 staff who had signed up to a pay freeze.

“These are fantastic results that we’ve had in the last year, as I said, record results for the group,” chief executive Alan Joyce told reporters.

“We do see the strong performance of the company continuing. This business has taken a lot of cost out and improved revenue dramatically. The transformation program has changed the business completely, delivering over Aus$1.66 billion in performance improvements. Without that, we wouldn’t be where we are today.”

Global ratings agency Standard & Poor’s said the result had no immediate impact on Qantas’ rating, which is currently at investment grade ‘BBB-‘.

“Underpinning the credit rating is the airline’s prudent financial policy framework that we view favorably against Australian corporate and global industry peers,” S&P said in a statement.

The ratings agency downgraded Qantas to “junk” in December 2013 after the airline issued a shock profit warning and announced job losses, before lifting it from ‘BB+’ to ‘BBB-‘ last November when earnings improved.

The aggressive push to cut some Aus$2 billion in costs and restructure the airline over 3 years began in early 2014, with thousands of jobs axed and dozens of aircraft sold or orders deferred.

“One of the reasons why Qantas is looking quite compelling and is producing very good results of late is the fact that the domestic market here has now basically shrunk to mostly a duopoly between them and Virgin,” IG Markets’ analyst Angus Nicholson told AFP.

“Many other airlines are faced with sharp competition on many of their different major routes, which crimps potential earnings and crimps margin growth.”

“Qantas now has this quite comfortable steady cash flow coming from the domestic market that can really finance their ventures into the more competitive international routes and that’s probably its major advantage against many other airlines,” Nicholson added.

Joyce said Qantas was set to roll out Wi-Fi access for passengers on its regional and international fleets, and would start selling tickets for its Dreamliner flights before the end of this year, with routes for the incoming Boeing jet starting in 2017. – Rappler.com