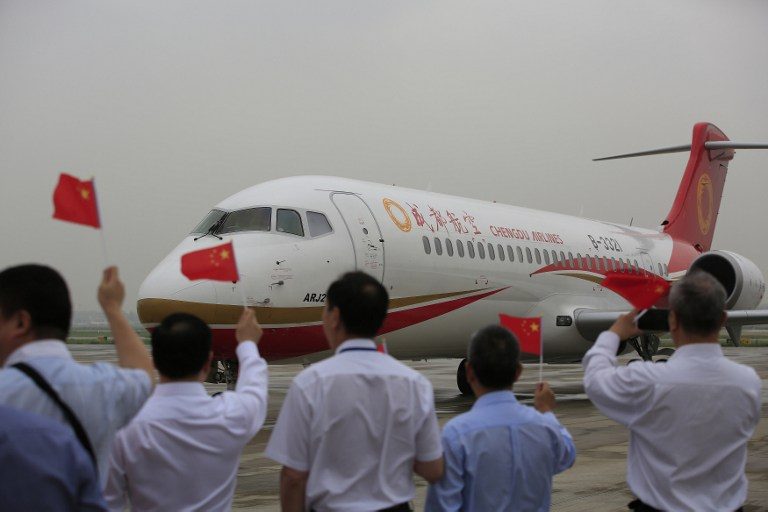 Facebook Twitter Copy URL
Copied
US aircraft manufacturer Boeing says China is expected to add more than 6,800 new aircraft to its commercial fleet by 2035, as passenger traffic is on the rise

BEIJING, China – China will become the world’s first trillion-dollar aviation market as its expanding middle class takes to the skies in ever greater numbers, US manufacturer Boeing predicted Tuesday, September 13.

The world’s most populous country is expected to add more than 6,800 new aircraft to its commercial fleet worth $1.03 trillion by 2035, Boeing said in its annual China Current Market Outlook.

Passenger traffic is estimated to increase 6.4% annually in China over the next 20 years as the country reforms its economy to rely more on consumption and the service industry to drive growth, said Randy Tinseth, vice president of marketing at Boeing Commercial Airplanes.

“As China transitions to a more consumer-based economy, aviation will play a key role in its economic development,” he said.

Chinese carriers have been expanding their fleets and adding new point-to-point services to cater to both leisure and business travel demand from an increasing number of affluent consumers in China and throughout Asia, Boeing said.

“The continuing expansion of China’s middle class, coupled with new visa policies and a wide range of widebody airplanes with new technologies, capabilities, and efficiencies, gives us every reason to expect a very bright future for China’s long-haul market,” said Tinseth.

A total of 1,560 widebody aircraft are seen as needed, according to the company.

China’s rapidly growing e-commerce business – already the largest in the world – also drives demand for cargo planes, with 180 new freighters and 410 converted freighters forecast to be added over the next two decades.

A quarter of Boeing’s deliveries over the last 3 years were to Chinese airlines, it says.

Boeing, maker of the 737 MAX and 787 Dreamliner, competes with Europe’s Airbus for global dominance in the aircraft market.

The US firm says it made more than half of China’s commercial jetliners currently in operation, while Airbus says it has an almost 50% share.

But both Boeing and Airbus are facing rising competition from Chinese rivals, who are supported by the government as Beijing sees the lucrative, technology-intensive industry as of strategic importance and a symbol of national pride. (READ: Made in China plane makes first commercial flight)

In November last year, state-backed Commercial Aircraft Corporation of China (COMAC) rolled out the C919, China’s first domestically developed narrow-body passenger plane that would compete with Boeing’s 737 and Airbus’ A320.

Airbus in March started construction on a new facility to deliver wide-body planes in China while Boeing has reportedly submitted to the Chinese government plans for a factory in the eastern province of Zhejiang.

“With such a large domestic base, there is an opportunity” for a Chinese airplane maker, he told reporters.

Boeing said in July it expected a combined 39,600 jets worth $5.9 trillion will be needed globally over the next 20 years. – Rappler.com