Oct 12, 2016 6:19 PM PHT
Chrisee Dela Paz
Facebook Twitter Copy URL
Copied
The first 100 days of Transportation Secretary Arthur Tugade are marked by initiatives to decongest the country's premier airport as well as an 'unchanged' state of MRT3 and EDSA traffic. They also give a glimpse of what lies ahead. 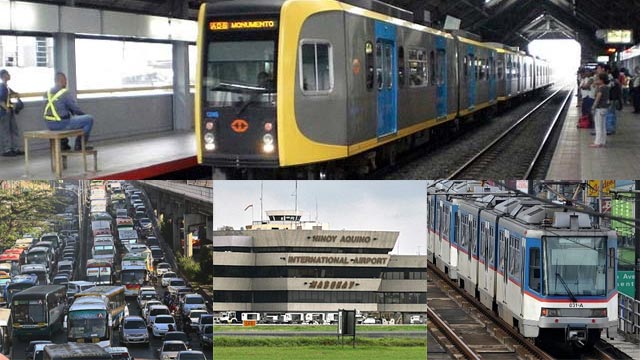 MANILA, Philippines – Past the honeymoon stage, the country’s transportation chief still needs to address some low-hanging fruits, such as the inadequate Metro Rail Transit Line 3 (MRT3) capacity, delayed infrastructure projects, and enforcement issues that add up to the already horrendous EDSA traffic.

On June 30, Transportation Secretary Arthur Tugade took his oath alongside other members of the Duterte Cabinet and promised increased MRT3 capacity, slashed processing times at all attached agencies, and a slight easing of EDSA traffic, among others, as his immediate goals.

A hundred days later, Tugade faced the media to report on his department’s accomplishments, so far, but also admitted some unfulfilled promises.

Tugade and the transportation department cited the elimination of the “laglag bala” or bullet-planting incidents at the Ninoy Aquino International Airport (NAIA), the end of the legal battle involving the MRT-MRT common station deal, fewer flight delays, faster Wi-Fi access in 23 public transport sites, and cleaner NAIA toilets, among others.

Some transportation experts, however said that these accomplishments fall below public expectations.

“[T]hey have stared at the problems and challenges, and believe they have the answers. It may be unfair to expect a quick ramp up the learning curve within 100 days, but they raised public expectations too much,” Rene Santiago, president of Bellwhether Advisory Incorporated, said in an e-mail correspondence.

“I give them thumbs up on the NAIA congestion; thumbs down on MRT3 and EDSA traffic. They are simply driving, albeit a bit more aggressive,  on the same dead-end roads that the previous administration has take with regards to MRT3 and EDSA,” Santiago told Rappler.

For Jose Regin Regidor, a research fellow at the National Center for Transportation Studies of the University of the Philippines (UP NCTS), the department “did pretty well” given how short the period was.

Although he noted “significant” improvements at NAIA, Regidor said that MRT3 and EDSA traffic are “still work in progress.”

Constant flight delays at the NAIA prompted transportation officials to consider the diversion of some domestic flights and general aviation flights to regional airports.

Passenger arrivals at NAIA, which has a handling capacity of 28 million passengers annually, surged to 36 million in 2015.

In his first week in office, Tugade told several businessmen in a forum that he will scrap general aviation operations at NAIA to add 18% to 22% physical aviation space to commercial flights.

Both Santiago and Regidor praised the DOTr’s swift actions in decongesting NAIA. There is still no final plan, however, to build a Manila-Clark train. (READ: Tugade to formalize Manila-Clark train plan in 90 days)

In 100 days, the department was able to increase on-time flight arrivals at NAIA to 72% from 41%. 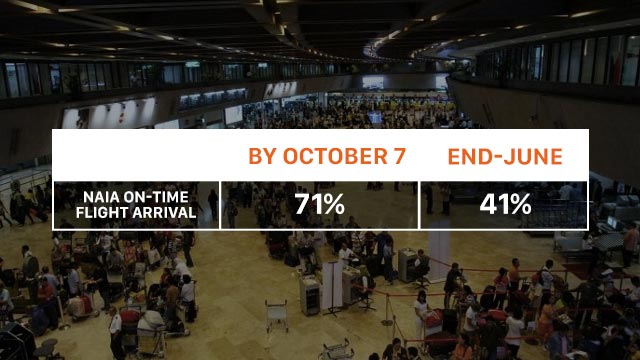 For Regidor, major infrastructure decisions loom. Tugade has opened his doors to unsolicited proposals for a new international gateway.

The P74.56-billion ($1.66-billion) deal to upgrade the NAIA is set to be bid out via public-private partnership (PPP). This NAIA PPP deal has drawn interest from the country’s top conglomerates, such as San Miguel Corporation, Metro Pacific Investments Corporation, and Lucio Tan-led Asia’s Emerging Dragon Corporation.

The DOTr said that within the week the NAIA landing system, which has been dysfunctional for almost two years, will be installed “to help reduce flight diversions.”

In the face of public criticism due to the railway system’s substandard and sometimes perilous service, the Aquino administration ordered 48 new MRT3 cars from Chinese supplier Dalian Locomotive.

Continuing what has been done, Tugade promised to increase the MRT3’s speed to 50 kilometers per hour (km/h) from the current 40 km/h, and passenger per hour per destination to 15,760 from 14,184.

Within his first 100 days, the transportation czar said his department will increase MRT3 trains to 20 with 60 cars, from the current 16 with 48 cars.

Other than these MRT3 basic maintenance fixes and upgrades, Tugade also promised to resolve the common ctation issue.

Only a few of these 100-day targets have been achieved.

In its 100-day accomplishment report released to the media, the DOTr said that the are still 16 MRT working trains, while the speed increased only to 45 km/h from 40 km/h. It added that there is an “ongoing purchase of signaling system and power source to deploy more cars by 3rd quarter of 2017.” 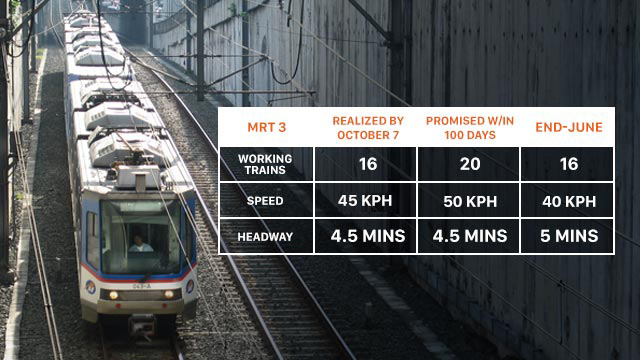 On the sidelines of a forum in August, Kintanar said the transportation department is carefully looking at the bankability of the projects before tendering them.

“We should make sure that it is financially viable for the private investors,” the transportation official had said.

“What we want to achieve in the next 6 years is to get the process going regardless of whatever happens in the next administration. It’s important that the projects are on the ground. Obviously, we want to finish it sooner rather than later,” Kintanar added, without disclosing timetables for each PPP deal. 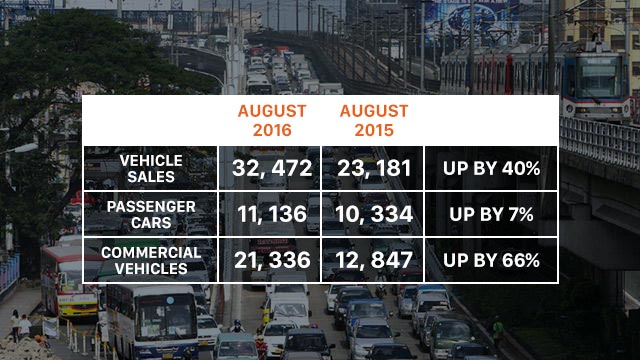 Tugade also talked about the establishment of friendship or alternative routes, by opening private subdivision roads to non-resident motorists.

Citing its accomplishments, I-ACT said in a statement that during the first 100 days of the administration, 171,550 traffic violators were apprehended – 28,064 from Metro Manila and 143,323 from other regions.

The agency had also suspended the 10 am to 3 pm window that allows private vehicles on coding days to ply major roads in Metro Manila.

Two integrated bus terminals in the southern and southwestern parts of Metro Manila are also set to be opened in 2018.

On the enforcement side, UP NCTS’ Regidor said there is a need for more coordination and less turfing among national and local agencies.

“My observation is that local government units and national agencies can be a bit stubborn and go about the motions of cooperation but eventually do their own thing, according to what they think is right from their perspective,” Regidor added.

For the coming months, the transportation expert said the DOTr should focus on the low-hanging fruits, such as programs and projects ripe for implementation.

“Among these are rail and bus rapid transit projects that should have been started years ago and are now greatly delayed despite the demand for them,” Regidor said.

For Santiago, the road to a better Metro Manila traffic remains unclear.

“There is no glimmer of lights at the end of the tunnel for Metro Manila traffic,” he told Rappler.

“I tried hard to fathom their game plan and priorities – for Metro Manila and nationwide, but could only see a smorgasbord of the usual anemic prescriptions,” Santiago said. – Rappler.com