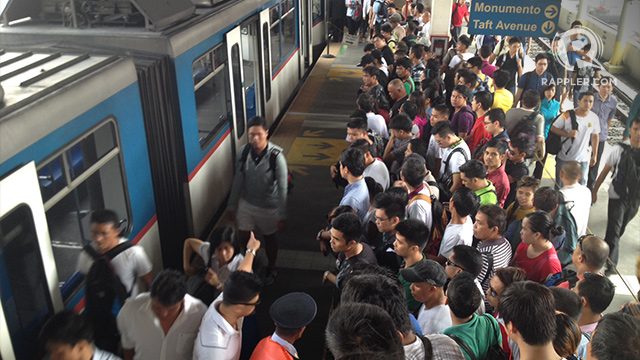 Facebook Twitter Copy URL
Copied
The Department of Transportation says it is awaiting the delivery of the power supply for the 4-car trains, which would take an additional 12 months

This was revealed on Wednesday, October 12, during the last Senate hearing on the bill that seeks to grant emergency powers to President Rodrigo Duterte to solve the traffic crisis.

Department of Transportation (DOTr) Undersecretary Noel Kintanar said they are eyeing the deployment of a 4-car train system. But this, he said, would not be possible until the middle of next year due to problems with the procurement of power supply.

“As we said in the first hearing, the real constraint of the MRT3 is the power supply. Because right now, we can run 20 3-car trains. If we were to put it in a 4-car train configuration, which would increase capacity by 33%, hindi po kaya ng ating mga substations (our substations wouldn’t be able to handle that),” Kintanar said.

Kintanar told the Senate panel that the bids and awards committee has already begun evaluating bids, with the awarding set for this month.

But the delivery of the power supply, he said, could take around 12 more months.

“But we’re going to push as fast as we can and hopefully by mid-next year, we can already deploy longer trains to increase capacity. But conservatively, we’d say around second to third quarter of 2017,” the official said.

Senator Grace Poe, chairperson of the committee on public services hearing the bill on emergency powers, then asked Kintanar about the status of trains bought from Chinese company Dalian Locomotive and Rolling Stock Company in 2014 for the MRT expansion project. (READ: Chinese firm says ‘capable’ to supply new MRT trains)

“So you’re saying the trains of Dalian’s can’t be used unless we have power supply – not one or we can start using a few of them already?” Poe asked.

Kintanar responded: “We can start using the Dalian as soon as the onboard signaling is tested and each LRV (light rail vehicle) has to be tested for 1,500 kilometers. But when we have the power supply, we can increase capacity and our target is, again it says 12 months in bid documents, but you can rest assured that we will push the contractors to deliver as soon as possible.”

Kintanar also promised that 12 more Dalian trains would arrive in January 2017. The Chinese firm is set to supply 48 brand-new trains as part of a P3.8-billion contract in 2014.

These trains, however, must first be equipped with an onboard signaling system and must undergo a 1,500-kilometer check before they become operational. – Rappler.com