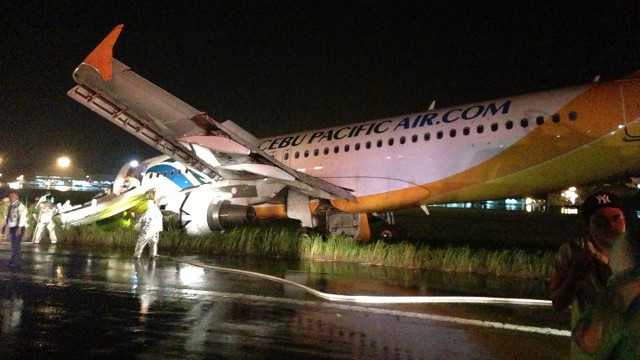 MANILA, Philippines (2nd UPDATE) – The Civil Aviation Authority of the Philippines (CAAP) on Tuesday, June 25 ruled that the pilots of the Cebu Pacific plane that overshot the Davao airport runway were responsible for the mishap, and ordered their suspension.

CAAP Deputy Director General John Andrews announced in a press briefing that Captain Antonio Roehl Oropesa and his co-pilot, First Officer Edwin Perello, were suspended for 6 and 3 months, respectively. Oropesa was also barred from serving as captain on a plane for a year.

“It was definitely the pilots’ error. We looked at 3 different factors in the investigation – man, machine and environment. The plane was okay and the environment was given,” Andrews said.

The pilots were manning the Cebu Pacific Airbus A320-200 aircraft that missed runway 23 of the Davao International Airport in bad weather on June 2.

The plane skidded off the runway and veered toward the grassy portion on the right side.

The Cebu Pacific flight, 5J 971, was carrying 165 passengers, including the two pilots and 4 crew.

No one was hurt in the incident, but several passengers complained it took a while before they were ushered out of the aircraft.

Andrews blamed the accident solely on the pilots, saying they should have aborted the landing when they realized the plane was coming down at a wrong angle.

He said the captain was negligent as he mistook the right white line on the runway for center line when descending from 50 to 20 feet.

He also failed to turn left when his co-pilot told him to do so as recorded in the “Cockpit Voice Recorder” of the plane.

Andrews said the pilot should have performed “balked landing” wherein an aircraft temporarily touches the runway and takes off again at any point.

He said this could have allowed the pilot to maneuver the aircraft for safe landing.

He said they failed to immediately evacuate the passengers, leaving them on board for 15 minutes during which time the aircraft could have erupted in flames.

“In cases like this, you immediately initiate emergency evacuation. You don’t know if the plane will explode or if the fuel lines were cut and there will be a fire.

“They should have opened the emergency exits and evacuated passengers within 90 seconds.

“When they were asked if they’d declare emergency, the pilots said no. They just asked assistance, according to the firemen of Davao airport who responded,” he said.

Cebu Pacific will also be asked to comply with an “action plan” which stresses safety over cost-cutting, Andrews said, adding that shaving down turnaround time between flights could cause mistakes to happen.

Cebu Pacific said in a statement that it would comply with all the aviation authority’s recommendations and would improve its training procedures, putting a new emphasis on safety.

READ: No sanction for Cebu Pacific after airport mishap

The airline began commercial operations in 1996, and was among the first in Asia to experiment with the budget airline business model. The Gokongweis implemented the low-cost carrier strategy in 2005, attracting customers by offering cut-rate fares to local destinations.

It has expanded operations in recent years, now flying to various major Asian cities, and soon to long haul destinations starting with Dubai in October.

Cebu Pacific has overtaken legacy carrier Philippine Airlines (PAL) in dominating the domestic skies. It is a major player in the local airline industry and, according to aviation analysts, has one of the highest penetration of budget airlines in the world.

Low-cost carriers like Cebu Pacific have flown more people from one island destination to the next than ferries and ships, which were the main inter-island mode of transportation.

The Davao airport is the main gateway to Mindanao. It is also the Philippines’ 3rd busiest airport, according to CAAP data:

– with reports from Lean Santos/Rappler.com and Agence France-Presse