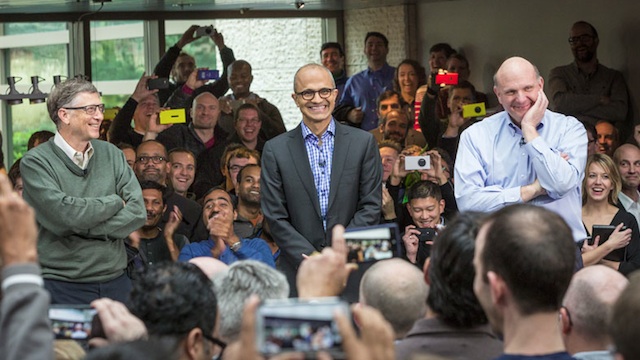 “This quarter’s results demonstrate the strength of our business, as well as the opportunities we see in a mobile-first, cloud-first world,” Microsoft chief executive Satya Nadella said in the earnings release.

“We are focused on executing rapidly and delivering bold, innovative products that people love to use.”

Nadella added that Microsoft is making progress in the increasingly important consumer market with services such as its Bing search engine and Office 365 Home suite of programs hosted in the Internet cloud.

Companies in the business software market that has long been Microsoft’s strength are also being won over to its cloud offerings, said Nadella.

Nadella, who took over as Microsoft chief in February, is benefitting from restructuring done by his predecessor Steve Ballmer, according to analyst Rob Enderle of Enderle Group in Silicon Valley.

Ballmer streamlined the management structure at Microsoft and made the technology colossus more responsive to customers, making it less likely they will be lured away from its software.

Microsoft also got a boost from an uptick in sales of its Xbox videogame consoles and Surface tablet computers — it sold two million Xbox consoles, with more than half of those its new-generation Xbox One.

Revenue from Surface sales leapt by 50 percent to approximately $500 million and money brought in from Bing search ads was up 38 percent.

Meanwhile, sales of Windows software to device makers grew four percent in the quarter, and the number of subscribers to Office 365 Home increased by a million to 4.4 million, according to Microsoft.

“In general, Microsoft is reflecting the fact that this year it is just in better shape, it’s more at fighting weight,” Enderle said.

“Nadella will benefit from that, and hopefully build on it.”

Microsoft should also see benefits from shifts to newer versions of its operating system software due to the recent end of support for aged but popular Windows XP.

Though there has been a continued shift from personal computers to mobile devices, Enderle said the trend was slowing.

“It looks like the days of rapid PC decline are behind us,” he said. “People are seeing they need a PC to do real work.”

Meanwhile, tablet sales are slowing in what is seen by some as a sign that market is saturated. – Rappler.com