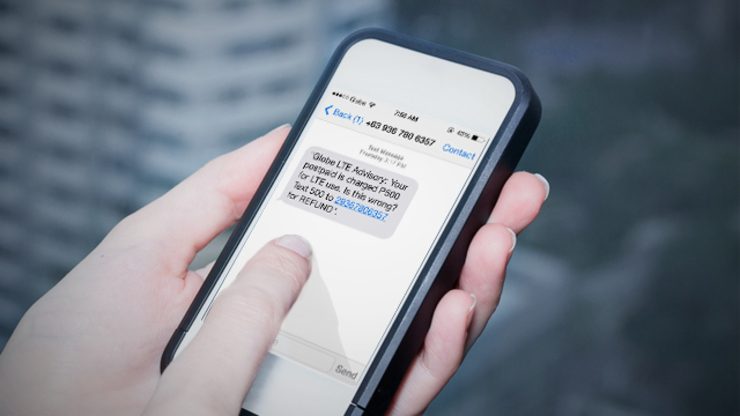 As of April this year, Globe said it barred from its network a total of 995 mobile numbers, 33% higher than the total mobile numbers blocked from the network for the whole of 2013.

From January to April 2014, the number of blocked numbers due to reported spamming activities increased by an average of 450% from a year ago.

The telecom firm asked NTC to impose sanctions against spammers and scammers through fines and penalties for sending unsolicited texts to its subscribers.

In June, the NTC issued show-cause orders against Caritas Health Shield Inc and Center for Global Best Practices (CGBP) due to separate complaints filed by Globe.

The legal action taken by Globe against Caritas and CGBP is in line with the company’s intensified campaign against spam and scam texts, prompted by constant customer service complaints on the issue.

How to block those spammers, scammers

Also, Globe has made available on its web page a channel through which customers can report text spams and text scams alike.

Customers who receive text spams and scams may also report via the Globe website through Talk2Globe Chat, send a message through Globe contact form, and by tweeting @Talk2GLOBE. Subscribers can put in the number, the exact message, and the time and date the text spam or scam was received.

Apart from the Globe channels, customers can also keep themselves from getting text spams and scams through their own devices.

iOS users may block unwanted numbers by opening the message, clicking the Contact button at the right hand corner, clicking the “i” next to the number they wish to block.

They can then scroll down to the bottom of the page where they will see the option “Block this caller” and then click to confirm.

For Android users, subscribers may block spam or scam through their gadget’s filtering settings:

They may also choose to actively block by inputting commonly used spam phrases and adding it to the “Add to Spam Phrases” list.

Globe assures its customers that it will continue to pursue text spammers and scammers.

“We would like to appeal to our customers to continue partnering with us in this endeavor by reporting mobile numbers used in sending annoying text spams and scams through various Globe channels so that appropriate measures could be undertaken,” Globe General Counsel Froilan Castelo said. – Rappler.com