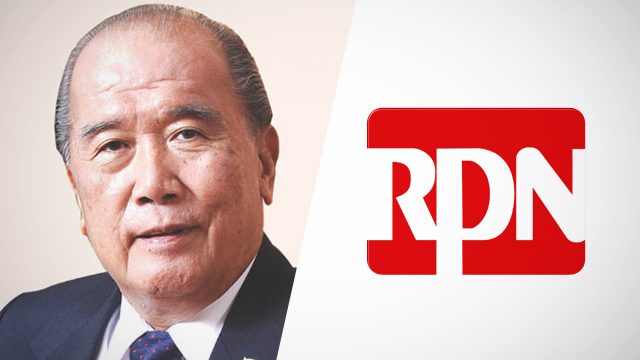 MANILA, Philippines – Former ambassador Antonio Cabangon-Chua is expanding his media empire consisting of a radio broadcast firm and a business newspaper, with the acquisition of Radio Philippines Network Inc. (RPN-9).

He is set to become chairman of RPN-9, replacing Wilson Tieng, who owns Solar Entertainment Corporation, an industry source said. Solar has a 33% stake in RPN-9, which is partly owned by the government.

Both Cabangon-Chua and Tieng refused to comment on the reported buyout, saying they are bound by confidentiality agreement.

RPN-9 is also 32% owned by the Benedicto family’s Far East Managers and Investors Inc. The Benedictos are closely associated with the late President Ferdinand Marcos and his wife, Imelda.

In 2012, cash-strapped RPN-9 let go of about 200 jobs, and converted billions of pesos worth of debts into equity, resulting in the entry of Solar and the Benedicto family.

Malacañang announced last year that the government would privatize RPN-9 and another state-run station, IBC 13, which was sequestered from Marcos cronies in 1986.

On its website, it announced that Solar News Channel would officially change its name to 9TV starting August 23, marking the beginning of the channel’s thrust to reach a wider audience and strengthen the presence on free TV RPN 9.

The company said in a statement that 9TV would continue to focus its programming on providing news and information, but it would also beef up its weekend programming to cater to more viewers.

Similarly, Solar News will be known as 9News. It added that 9News would continue to be the credible and consistent source of news and information, offering “News You Can Use” and “back-to-basics journalism.”

Tieng tried to lure businessman Ramon Ang to invest in Solar, but the investment never materialized.

Ang, who is president and COO of diversified conglomerate San Miguel Corporation, is set to formalize an agreement to acquire a minority interest in listed GMA Network Inc. (GMA 7). – Rappler.com

Image of former Amb. Antonio Cabangon-Chua from the University of the East website