Sep 3, 2014 5:00 PM PHT
Rappler.com
Facebook Twitter Copy URL
Copied
In its report on the garlic industry ordered by Malacañang, the Department of Justice-Office for Competition said one person has cornered 75% of the country's garlic imports through loopholes in the system 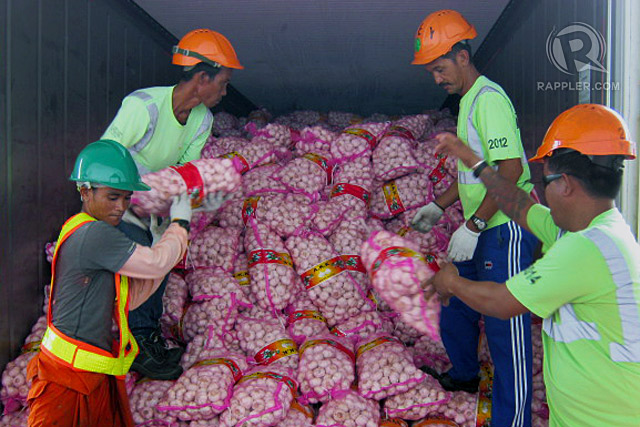 MANILA, Philippines – The Department of Justice believes that a “cartel” reportedly controlled by 4 individuals, in connivance with Department of Agriculture  and Bureau of Plant Industry (BPI) officials, is behind the “staggering” spike in garlic prices in Metro Manila.

Justice Secretary Leila de Lima made the statement on Wednesday, September 3, after the DOJ’s Office for Competition (OFC) completed its Report on the Garlic Industry, as earlier directed by President Benigno Aquino III following the steep increase in garlic prices despite abundant supply.

Garlic prices caught the attention of Malacañang when they reached  a high of P287 ($6.58) per kilo in June 2014 – a 74% increase within a one-year period and more than 100% increase from average prices.

About 73% of garlic demand is supplied by imports, while the remaining 27% comes from local sources.

De Lima said that the OFC has recommended, among others, the prosecution of the private individuals and public officials cited in the report, pending further investigation and evidence-gathering by the National Bureau of Investigation (NBI).

“As directed by the President and after a comprehensive evaluation, the main finding can be summarized into 3 major points: 1) there was no shortage of supply and, in fact, there were more adequate stocks of garlic; 2) majority of the ‘import permits’ issued was granted only to one preferred group; and 3) due to a cornering of supply, this group can dictate the high prices,” the DOJ chief said.

De Lima added: “The National Bureau of Investigation (NBI)…will gather further evidence to prosecute the personalities in the Report, as well as the BPI officials who may have been in collusion with them, with the end in view of filing the appropriate charges.”

In its 32-page report, the OFC presented 4 findings and 5 recommendations, to be endorsed to the Office of the President and relevant agencies for consideration.

The major findings are the following:

Cruz was also mentioned in the report when the OFC recommended the abolition of the National Garlic Action Team (NGAT), a multi-stakeholder body formed in 2012 to ensure stable garlic supply in the country. It said the NGAT had “failed to serve its primary purpose and to ensure a balanced representation from both government and private sectors.”

“The composition of the NGAT suggested blatant conflict of interest. The DA should consider either the abolition of the NGAT, or reconstituting it only as a policy team and not as an allocating entity,” OFC said.

The OFC said that Cruz started out as a regular importer/trader and established the Vegetable Importers, Exporters and Vendors Association of the Philippines, Inc (VIEVA) in 2011, and became a “very active force in the creation of the NGAT and its sister team, the National Onion Action Team (NOAT).

“Interviews with BPI officials’ and 3 accredited importers revealed that Cruz is behind all eight (8) farmers cooperatives and associations which are members of NGAT. Furthermore, she has created several dummy entities to maximize the number of SPSIC that she would get,” it said.

The OFC said that based on its investigation, Cruz had provided farmers cooperatives and associations “capital” in exchange for their allotment of Sanitary and Phyto-Sanitary Import Clearance (SPSIC).

“Cruz engineered the entire scheme and the NGAT is nothing but an elaborate ‘moro-moro,’ a way for Cruz and her dummies to give a semblance of regularity to their scheme,” the OFC said in its report.

It added: “That Cruz is behind these cooperatives and associations and gets to enjoy 60% of the total import permits issued is said to be common knowledge to the industry. But what most importers cannot ignore is that Cruz is even taking a share in the 40% allocated to legitimate importers through her dummy entities.”

The OFC said that with Cruz allegedly controlling 75% of garlic importation, if she sells expensive garlic to wholesalers, “such cost will be carried through in the supply chain until ultimately, the retailers bear the brunt of the high cost.”

It also cited “indications that certain BPI officials use this permit system to engage in unlawful combination together with Cruz and altogether control the importation of garlic in the country.”

“The control is so organized that it favors only few selected importers to the exclusion of other legitimate importers.  Officials ensure that trade in importation is limited only to a select group by restricting the allowance of SPSIC only to favored dummies of Cruz when this could have been undertaken by giving all legitimate importers the opportunity to take part in the importation,” the office said.

It added that based on its findings, “BPI officials have even gone to the extent of revalidating expired permits in two (2) occasions involving hundreds of SPSIC, an act without legal basis.”

“Apart from this main preferred group, there are other individuals and firms who are also engaged in the same modus operandi as Cruz albeit on a smaller scale. There are also indications that BPI officials abused their power and exercised it to prejudice other importers. There are allegations that importers remit PhP 50,000 ($1,146*) to BPI for every SPSIC released although this information was not offered by the two (2) other importers interviewed,” it said.

The DOF OFC  recommended the removal of the BPI “import permit” system, as the BPI “should only be concerned on implementing its primary mandate, which is to issue the Sanitary and Phyto-Sanitary Import Clearance (SPSIC) to prevent entry of plant pests in the country.”

“It should not be concerned with volume of imports or determining the financial capacity of importers,” it said.

The office also recommended the adoption of “impartial standards and clear criteria” in granting SPSIC to legitimate and accredited importers “without any subjectivities.”

“Exercise of discretion led to abuse of the system and this should not be condoned or continued,” the OFC said.

It also said that it does not encourage the participation of farmers and local producers in import allocation schemes as this “results in the perversion of markets.” The farmers “should instead focus on crop growth with the assistance of the DA.”

The OFC recommended the grant of “visitorial powers” to the DA and the BPI so they can monitor the inventory of garlic in warehouses and cold storage facilities.

“Actual inspection of the garlic wholesalers’ and traders’ storage facilities shall aid in the discovery of hoarding or any other anti-competitive activities,” it said.

The OFC further recommended that “existing and prospective importers should be required to execute a waiver of rights, allowing the DA and BPI to enter their storage facilities for inspection purposes.” – Rappler.com