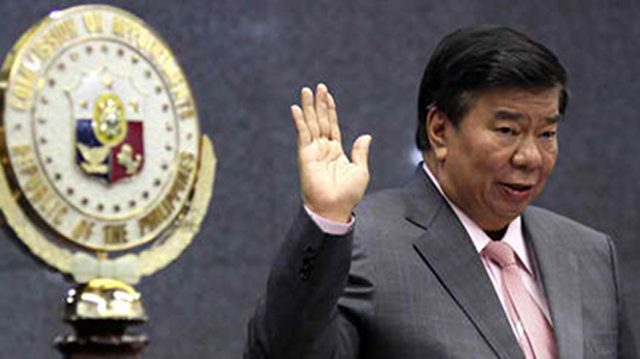 The senators said Malacañang should not expect the resolution to be ready by the end of September, like it requested, as both houses of Congress need to carefully deliberate on the matter.

Drilon said the letter they received from Malacañang did not contain important details such as the parameters of the emergency powers it was asking for.

He said the letter indicated the government would spend P6 billion to contract 300 megawatts of additional capacity, but even this amount needs to be studied.

“We can’t just rush this because it involves a huge amount of money,” Drilon said in an interview on radio DZRH Wednesday, September 17.

Osmeña said the same thing. “They just sent the letter and they want it by the end of this month? No, sir! I have to protect the Filipino people. We cannot just grant emergency powers… We have to be very careful about what type of powers we will extend to them.”

The Electric Power Industry Reform Act (EPIRA) of 2001 bars the government from contracting power, but Section 71 allows the President, in case of an imminent shortage, to seek powers from Congress to address it.

There will be a shortage of about 300 megawatts in summer 2015 that could lead to rotating brownouts for 20 days, according to Energy Secretary Carlos Jericho Petilla. President Benigno Aquino III recently said this deficiency could reach 1,000 megawatts.

At the budget hearing on Tuesday, Petilla told the senators that they were hoping to get Congress’ approval by the end of the month as lead time of 5 months was needed to acquire additional generating capacity. He also said that the P6 billion would be spent to purchase modular generator sets or rent a power plant for two years.

Osmeña, chair of the Senate committee on energy, said they would hold a hearing on Malacañang’s request next week.

Osmeña and Drilon cited the need to look for “other ways” to address the power shortage.

Drilon said the rehabilitation of the Malaya power plant would help deliver additional power for the government. “We have to look into that. Can’t it be fixed within 3 months? Till now we don’t know what’s wrong with the power plant.”

Expanding the Interruptible Load Program (ILP) is also an option, according to Osmeña. Under the ILP, customers with large power requirements, like commercial establishments, will be asked to operate their own generator sets if the grid operator projects a need to augment generation capacity in the Luzon grid. Through this, the demand for power from the system will be reduced to a more manageable level.

Osmeña also pointed out the need to manage demand. “You have to teach people how to save electricity, because this lessens our consumption. We can save a lot of money, and it lessens the overall consumption of our country.” – Rappler.com