Facebook Twitter Copy URL
Copied
The iconic brand’s CEO says they are finding more ways to boost the business, along with growing further in overseas markets like the Philippines

But the Winstom-Salem, North Carolina-based doughnut company is looking into more ways to maintain customer loyalty and attract more millennials to become attached to the 77-year-old brand, best known for its signature hot Original Glazed® doughnut.

From doughnuts to digital

“World famous doughnuts & coffee since 1937,” that is Krispy Kreme’s line, and the brand is known for its doughnuts. But Krispy Kreme has coffee products and other beverages like the Chillers to offer customers.

“We’re a doughnut company. [But] from a strategy standpoint, we want to grow the beverage side of our business. We want customers to have more attachment to our product. We want them to buy the doughnut – and the coffee – from us,” Thompson said. 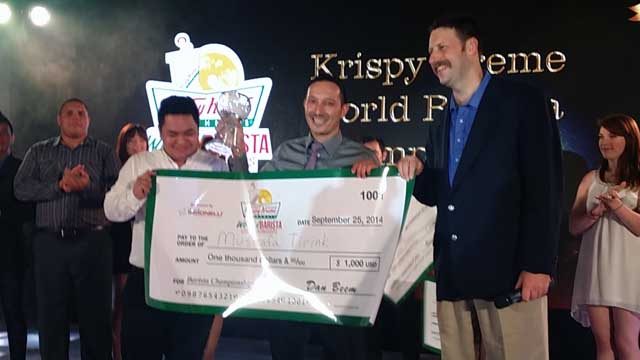 Aligned with that strategy is hosting its own Krispy Kreme World Barista Championships, held this year in the Philippines.

The event, held from September 22 to 25 at the Peninsula Hotel Manila in Makati City, drew 12 baristas from Puerto Rico, the United Kingdom, Australia, Saudi Arabia, Turkey, Korea, Japan, and the Philippines, among other countries.

Kevin Matias, Krispy Kreme international operations manager, said the world barista championship is not merely a search for skill, but about enjoying the best brew – “meeting the most engaging Krispy Kreme barista and sharing the most delightful conversations with a customer.”

“This is the ‘real life’ Krispy Kreme environment and global experience that we want our customers to enjoy and remember,” Matias added.

Prior to Krispy Kreme, Thompson was president and chief operating officer at Papa John’s. He was responsible for the digital strategy of the pizza chain by making it a pioneer in online ordering.

Thompson said that Krispy Kreme is catching up in harnessing digital opportunities to its advantage. The company is currently developing a digital loyalty program in the US, which will be tested by end-2014 and then rolled out internationally.

Using social media to announce Krispy Kreme’s limited time offers of novelty products is proving to be strong, attracting more millennials to patronize the brand. In July, its 77th birthday treat to its customers – half a dozen Original Glazed® doughnuts for just P77 ($1.71*) – was a hit, evident in the snaking lines of customers wanting to avail of the promo.

Philippines as a flagship market Krispy Kreme’s growth in recent years has been attributed to its international expansion following the closure of many US locations in 2005 to 2008, when the company’s stock tumbled after too many larger, expensive stores were built hastily.

For its second quarter figures for fiscal year 2015 (ending August 2, 2014), Krispy Kreme reported that its international franchise revenues increased 24.4% to $7.5 million from a year ago, driven by higher royalties. Sales by international franchise stores also rose 11.4% to $115 million for the same period (9.3% excluding the effects of foreign exchange rate changes).

To date, Krispy Kreme has 884 stores in 23 countries; about 600 of the chain’s stores are in international markets like the Philippines.

Though no figures were made available, Krispy Kreme Philippines said the firm is closing 2014 with 56 stores, with the 53rd store opening in the coming week in Tomas Morato, Quezon City.

Sharon Fuentebella, Krispy Kreme Philippines CEO attributed their local expansion to the growing Philippine economy and said they are also locating in emerging cities like Bacolod and Iloilo, where the company targets to open branches this year. Ten stores are also in the pipeline for 2015. The revenue target for 2015 is also in the double digits.

The Max’s Group (of Max’s restaurant chain) remains Krispy Kreme’s master franchise holder in the Philippines and is not sub-franchising anytime soon.

Fuentebella added that Krispy Kreme is targeting to have 100 stores in the country, all of which will be company-owned. No timetable or expected capital outlay has been specified for the plan.

Appointed as the top honcho in June 1, 2014, Thompson says he is a consumer first before a C-suite executive, and that he is a big patron of Krispy Kreme prior to his role. But what he realized is that Krispy Kreme is a much bigger and stronger brand than he thought.

“I’m actually more excited knowing the great opportunity this brand has around the world. We want our global partners, our franchisers, our customers to believe more in the brand,” Thompson said.  – Rappler.com