Waking up to Kalinga coffee 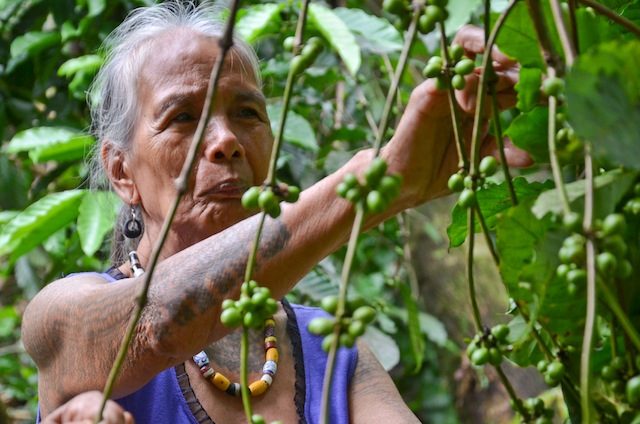 KALINGA, Philippines – In a small village in the outskirts of Tabuk City, Zita Degay wakes up early in the morning to brew her family’s day starter, an aromatic cup of coffee. But unlike in the past, she no longer has to buy coffee powder sold commercially.

Why? She now owns one.

Named after the mountain peak overlooking her home, Magallaya Mountain Specialty Coffee is the fruit of Degay’s 10-year patience and dedication to the revival of the waning Kalinga coffee industry.

“It was hard. It really tests a person’s patience and heart for coffee,” a teary-eyed Degay said in a visit to her home in barangay Bagumbayan last September 19.

She is but one of the few dozen small-scale coffee producers in the province who braved the odds to revive the once flourishing coffee industry of this province.

Dubbed the “Rice Granary of the Philippines,” Kalinga was once known for its lush coffee plantations and was once among the top coffee bean suppliers in the 1960s to 1980s. It complemented the income from rice, the main produce of the province, and was thus valued as much.

“Coffee was once abundant in the forests and even along the riverbanks and beside the creeks especially in our town in Tanudan,” reminisced Engineer Domingo Bakilan, the provincial agriculturist, who admitted owing his degree to the coffee industry.

Due to Kalingas varied elevations, all 4 coffee varieties – Arabica, Robusta, Excelsa, and Liberia – grow well. But the Kalinga people, known as one of the best brewers in the country, then did not know that one particular coffee species was different from the other. There was no Robusta or Arabica, they generally term all plants producing the beverage drink as “kape.”

They simply sold roasted coffee beans not per kilo but by “ganta” or “salop,” measured using a large sardine can.

However, by the early 1990s, the coffee industry started to wane fast as the prices of goods started rising. Many abandoned their coffee plantations to focus on crops such as corn and root crops.

Kalinga was not alone, however, the entire Philippine industry declined in the recent decade due to factors such as low-buying prices and unproductive coffee trees, among others.

Using government programs, Bakilan said they started convincing farmers to revive the coffee industry in the mid-1990s by rejuvenating the plantations. However, the introduction of genetically modified corn, which produced more and faster harvest time compared to the native corn, was more than enough to convince the farmers to stick to corn production.

Coffee was harvested only once a year and it takes an average of 4-5 years for a plant to bear beans, while GMO corns can be harvested twice a year with only little maintenance.

Soon the Kalingas started cutting down their coffee plants to turn the ground into more profitable industry and by mid-1990s.

“Forest lands were swiddened to create more farmlands because the cash crop (corn) yielded better money for the people,” Bakilan lamented. Corn is now grown in around a third of Kalinga’s agricultural lands.

By the late 1990s to early 2000s, coffee prices started to hike as the worldwide demand for coffee increased.

Government line agencies and the provincial government once more tried to revive the dying industry by doling out coffee seedlings and giving trainings and seminars. But still, it did not change the situation.

Degay, who attended one of the trainings, said starting the coffee business in 2004 was not for the faint of heart. In the first year, she struggled with packaging and marketing.

“It was a lot of sacrifice because it was hard to sell our products because of the availability of cheaper coffee and we had no direct market,” she explained. With help from the Department of Trade and Industry (DTI), Degay was able to raise her production quality by giving her coffee powder a standard packing and a direct market – gourmet coffee shops.

In almost a decade of persistence, Degay’s Magallaya Mountain Specialty Coffee products are now one of the prime exports of the province aside from the Unoy heirloom rice.

“We can’t compete with multinational companies but we need to rouse back the interest of our farmers in reviving the coffee industry,” DTI Cordillera Regional Director Myrna Pablo said. The answer, she explained, is to penetrate the specialty coffee shops in urban areas in the country.

In the recent years, specialty coffee shops flourished in the urban areas. This can be attributed, among others, to the emergence of industries and business.

DTI Assistant Secretary Ceferino Rodolfo, who visited Degay with Bakilan, said going for the niche market is the best option for the local coffee farmers because of the small production volume. He added niche market highlights the indigenous culture behind the coffee production.

“In gourmet shops, it’s not just the coffee you are buying but it’s the culture, the story behind the coffee cup,” Rodolfo stated.

The DTI has been pushing efforts since 2010 to encourage small and medium enterprises (SMEs) to target the growing demand for premium coffee in local coffee shops in the country.

“We want Cordillera coffee in the development plan as the preferred coffee origin because if it is not specialty, you don’t get as much. It is not enough to advocate plantation expansion when they do not see the benefit and that benefit can be seen when you get engaged in the niche market,” explained Rodolfo.

In her village, Degay’s patience and dedication to the coffee revival bore fruits. She is now joined by 41 other farmers, and together they formed the Gawidan Farmer’s Association. They now have 3 distinct brands of coffee aside from the Magallaya Mt Specialty Coffee. 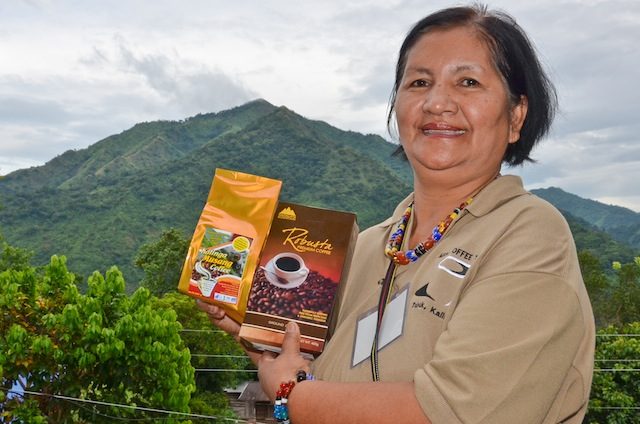 Kalinga, as of 2012, ranks 7th nationwide in terms of production, according to DTI. It is still, however, Cordillera’s prime source of coffee beans contributing 69% of the annual 6,000 average produce of the Cordillera.

“We want to revive the coffee industry not just to become the top producer in the nation but it is also a way of reviving our culture,” Bakilan said. Next year, the Department of Agriculture will be providing an initial 90,000 coffee seedlings to replace the areas that were converted into corn production.

However, it will not be just doling out the plants.

The provincial agriculturist said they are already in the process of identifying the farmers who are really interested in growing coffee.

“We need to set those who have the heart for coffee, else we risk wasting resources,” Bakilan said. He added his office will also conduct training for farmers and institutionalize monitoring of farms.

The coffee plantation expansion will augment the Shared Services Facilities (SSF) or machines and capital equipment for roasting and grinding coffee launched by government agencies and international organizations.

The first shared services facilities for coffee in the Philippines, machines for roasting, pulping, and grinding are shared among communities of coffee farmers and traders in the Cordillera region.

“There are vast opportunities in the regional and global production networks that we can take advantage of. The quality of our workers and the quality of our coffee beans will be key to the success of Philippine coffee in the domestic and international markets,” Rodolfo added. – Rappler.com