Aquino: Invest in the Philippines – and in Filipinos

Oct 28, 2014 7:36 PM PHT
Rappler.com
Facebook Twitter Copy URL
Copied
While reporting $4 billion in foreign direct investments as of August, the Aquino government says it is making sure that Filipino workers acquire the talents and skills needed by foreign investors 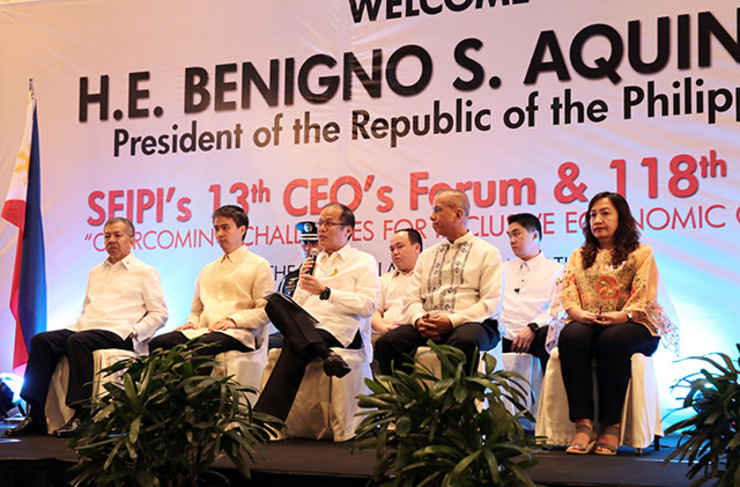 MANILA, Philippines – President Benigno Aquino III called on investors to invest not just in the Philippines but, more importantly, in its people.
During an open forum at the 13th CEO forum of the Semiconductor and Electronics Industries in the Philippines Incorporated (SEIPI) on Tuesday, October 28, the President stressed that the greatest single resource of the country is the people.

“Obviously we were ignored for the longest period of time and it’s been in the last few years that we’ve suddenly gotten back into the limelight, and we do intend to maximize our exposure by really proving to all investors that it is really worth their while and a very sound decision to invest not just in the country but more importantly in the people,” Aquino said.

Aquino shared that during his recent trip to the United States, his delegation talked to a consumer appliance manufacturer who was exploring the potentials of moving his operations to the Philippines. The manufacturer said he sub-contracts projects to employ about 600,000 workers in a single country.

“He stated during our meeting that he saw a report on the Philippines, perhaps a CNN program, and because of this he was encouraged to seek us out and to start exploring the potential of moving his operations from that particular country to the Philippines. He was that gung-ho,” Aquino said.

Aquino added that the company is not only looking for contractors for their products, but also promised to provide engineering scholarships for the continued research and development efforts of that company.

Trade Secretary Gregory Domingo said that creating a better business environment for investments to come in the Philippines has been the thrust of the Aquino administration.

“As of the latest figure writing up to August, it’s already $4 billion FDI this year,” Domingo said.

Domingo added that the good governance agenda of the Aquino administration is paying off, resulting in dividends.

“We continue to work on improving the business environment and continue the discussions with the private sector so we go hand-in-hand,” he said.

Roadmaps for sectors, like the electronics industry, are also under development, Domingo added.

Asked how the country’s growth will be sustained and prepared for the Association of Southeast Asian Nations (ASEAN) integration in 2015, Aquino cited what he learned from his parents: never be satisfied.

Thus, “I keep pushing everybody if they have reached [their goals].”

The liberalization of the banking industry has made the country more attractive to foreign investors, Aquino said. He cited as example the preference of Japanese firms to deal with Japanese banks here.

“Congress has enacted a law that has opened up our banking sector, which will redound to, again, more competition in the financial sector, more competitive products for all of you, and, again, it redounds to greater efficiencies for the economy,” Aquino said.

Aquino also stressed that the government, through the Department of Trade and Industry, is doing all steps necessary to reduce requirements to a minimum when setting up businesses here, but still faithfully compliant with the laws.

The President added that they were trying to tackle all of the problems – from the bureaucratic red tape, necessary infrastructure support, to education concerns in terms of investing in our people.

“We also want to make sure that if it’s the talent that they need, that the talent does exist or, if it doesn’t exist, that we are developing that talent toward that goal, our mutual goals of increased growth,” Aquino said. – Rappler.com