Singapore Airlines to open lounge at NAIA 3 in March 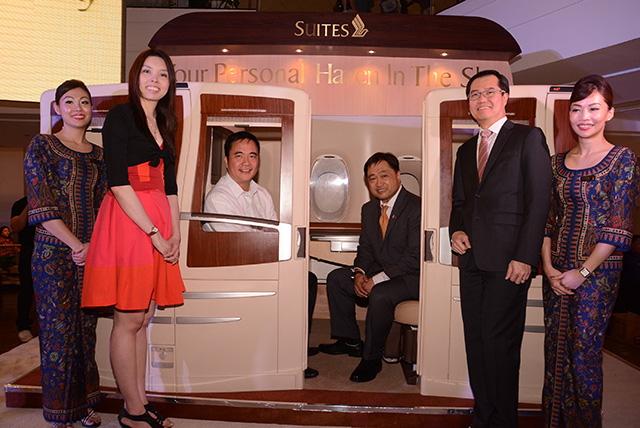 MANILA, Philippines – Singapore Airlines (SIA) reaffirms its commitment to the Philippines through the opening of its SilverKris Lounge at the Ninoy Aquino International Airport Terminal 3 (NAIA 3) in March 2015.

SIA moved to NAIA 3 in September 2014. The airport became fully operational by end-July 2014.

“That’s how Manila is important to Singapore Airlines,” Goh said in his speech at the travel fair opening night on February 5 at the Glorietta Activity Center in Makati City.

Apart from SilverKris lounge opening, SIA showed off its cabin products on display for the first time at  the travel fair. It also gave a preview of the airline’s newest cabin, the “Premium Economy Class.”

Finance Secretary Cesar Purisima launded SIA’s commitment to the country and said that the carrier shares the Philippines’ vision of propelling the tourism industry as a driver of growth.

“Airlines are important for us. We need to be committed to our growth,” Purisima said.

SIA operates 49 flights weekly from the Philippines and connect to over 90 cities globally through Singapore.

Singapore is a gateway of European investors and tourists to ASEAN, which the Philippines is part of. As such, the country should avail more of this opportunity, said Transportation Secretary Joseph Emilio Abaya.

With 2015 declared as “Visit the Philippines” year, Goh said SIA is more committed to elevate the air travel and tourism landscape of the country.

“Our investments this year clearly demonstrate the confidence we have in the Philippines as a tourist and business destination,” Goh said.

SIA also taps more Filipinos to travel through the launch of its premium economic class and hosting travel fairs in Makati City, Cebu, and Davao.

The Manila leg of the showcase and travel fair concluded on February 8, while SIA’s sister carrier, SilkAir, will hold a travel fair at Ayala Center Cebu.  A SilkAir booth will also be at Abreeza Mall in Davao.

SIA and SilkAir are offering economy class tickets to Singapore from $145; to South East Asia from $210; to India from $690; to Australia from $700; and to various destinations in Europe from $899.

Travelers may purchase their tickets at the travel fairs or SIA and SilkAir ticketing offices and selected travel agencies until February 28.  Travel period is until December 31, 2015.

Customers can avail of up to 6 months 0% special installment plan on their BPI credit card.

On top of the value fares, SIA is offering Filipino travelers the opportunity to book a one-night Singapore Stopover Holiday (SSH) package or a one-day Singapore Explorer Pass (SEP) for only US$1.

The SEP offers access to over 20 tourist attractions and activities in Singapore and is usually priced at US$36 for a 1-day adult pass or US$24 for a one-day child pass.

The promotion is part of a series of activities that SIA lined up for the year to celebrate Singapore’s 50th birthday.

The SSH package is for Singapore Airlines or SilkAir customers who are stopping over in Singapore before flying to their next destination. It includes hotel accommodation, airport transfers, and entrance to major tourist attractions and activities.

Customers can also avail of the unlimited rides on the SIA Hop-on bus – an air-conditioned bus service for visits to more than 20 major attractions in Singapore, plus a 50% dining discount at designated food outlets at selected hotels.