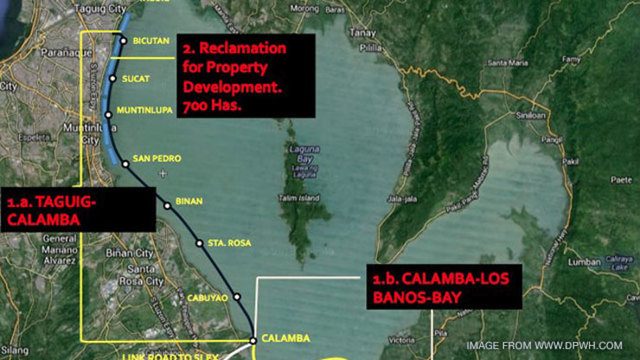 MANILA, Philippines – The firms are well-known in infrastructure and land developments in the country, but if they form a consortium to bid for the most expensive public-private partnership (PPP)  to date, that is a stronger force to reckon with.

The consortium formed Trident Infrastructure and Development Corporation (TIDC) or “Team Trident” and submitted its qualification documents to DPWH at 10:08 am Friday, February 27.

Their strengths? The infrastructure expertise of Aboitiz and Ayala, combined with the reclamation and land development experience of Megaworld, and SM.

The consortium also has the financial capability, plus the local and foreign network of experts to undertake such project – the biggest PPP rolled out by the Aquino administration. (READ: Why same firms are vying for PH infra projects)

“Trident brings together the expertise, experience, financial strength, and network that is needed to successfully execute a project the size and scale of Laguna lakeshore expressway dike project,” the group said in a statement submitted to the Philippine Stock Exchange (PSE).

Other bidders for the PPP project include San Miguel Holdings Corporation, which submitted requirements 11:53 am Friday.

The fourth bidder – the Rainbow Consortium – submitted its documents at 1:42 pm, beating the 2 pm deadline set by the DPWH.

The agency will complete the evaluation of qualification documents submitted by the bidders within 7 days, DPWH Undersecretary Rafael Yabut told reporters.

The tentative schedule for the opening of financial bids is on July 6 afterwhich, the PPP project would be awarded to the highest bidder within one month, Yabut added.

DPWH is satisfied with the turnout of Friday’s bidding as most of the initial 24 firms that bought bid documents formed groups to bid for the project.

The Laguna lakeshore expressway dike project involves the construction of a 47-kilometer flood control dike. Pn top of which will be a 6-lane expressway starting from Taguig, passes through Muntinlupa and Calamba, and ends in Los Baños at its boundary in Bay, Laguna.

The PPP project also includes the reclamation of about 700 hectares of foreshore and offshore areas, west of the dike, in Taguig and Muntinlupa. – Rappler.com