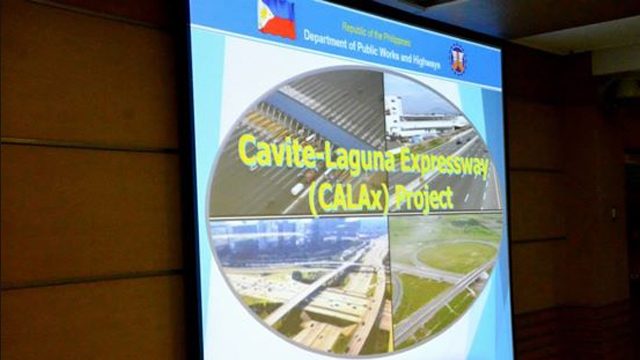 MANILA, Philippines – Submit all required documents again and old submissions should not be resubmitted or risk being disqualified, Department of Public Works and Highways (DPWH) Secretary Rogelio L. Singson told interested parties in the rebid for the controversial Cavite-Laguna expressway (CALAX) project.

In a pre-bid conference Friday, March 20, Singson stressed that the P35.4 billion ($7.87 million) public-private partnership (PPP) will be running on a very tight schedule as it is set to issue notice of award on July 7, 2015.

The following are the dates leading to DPWH’s issuance of the notice of award:

The draft concession agreement for the CALAX project will be made available on Monday, March 23, DPWH said.

Interested parties were also told to submit new bid security as the agency is set to issue guidelines via a bulletin.

Singson told the attendees that the agency will make sure that all concerns raised by those who bought the bid documents will be addressed.

SMC has formally expressed interest to rebid for CALAX via a letter of intent.

The CALAX rebid was approved February 16 by the National Economic and Development Authority (NEDA) board chaired by President Benigno Aquino III.

The NEDA board also approved the new floor price of P20.105 billion ($447.12 million), the same as the submitted bid of SMC’s Optimal Infrastructure Development Incorporated. The SMC subsidiary was disqualified in 2014 due to a non-compliant bid security.

The SMC said its unit was fully compliant with the bid requirements for CALAX. The diversified conglomerate brought the case to the Office of the President, which later ruled in favor of SMC and offered a rebidding.

Team Orion, the 50-50 joint venture between Ayala’s AC Infrastructure Holdings Incorporated and Aboitiz Equity Ventures, was the highest bidder at P11.66 billion ($259.22 million). Team Orion said it is no longer participating in the rebidding after it expressed disappointment over Malacañang’s decision.

CALAX is a 47-kilometer expressway project which connects Bacoor and Kawit in Cavite and the South Luzon Expressway areas. – Rappler.com