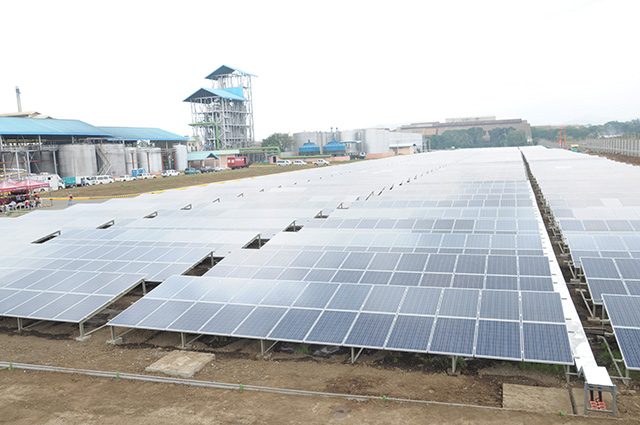 Facebook Twitter Copy URL
Copied
The Absolut Distiller’s P189M solar power plant in Lian, Batangas, is only the start, as the tycoon intends to further invest in renewable energy

“This 2-megawatt (MW) solar power generation facility is only the beginning. From here, we see even greater possibilities,” Tan said in his speech during the plant’s inauguration Wednesday, March 25. “We are committed in pulling our resources to bring better alternatives to help in the government’s efforts to mitigate the effects of climate change,” he added.

ADI would be selling the power generated by the plant to the Batangas Electric Cooperative (Batelco) for P9.68 ($0.22) per kilowatt-hour (kWh) – the rate approved for solar power companies by the Energy Regulatory Commission under the feed-in-tariff (FIT) scheme, said ADI General Manager Gerardo Tee.

Under the FIT scheme, companies may apply for a certificate of compliance, which would enable them to dispatch electricity to the grid at a fixed rate for 20 years, Energy Secretary Carlos Jericho Petilla said.

As such, companies are racing to build renewable energy facilities to take this opportunity provided that they meet the government quota of 500-MW, Petilla added.

“Other companies would apply for a certificate even without a project, but here at Absolut, the facility is already built. This is the serious investor,” Petilla pointed out.

The solar power plant project is the Lucio Tan Group’s first venture of this magnitude in renewable green energy, but ADI has been advocating for sustainable energy since the 1990s.

ADI’s green initiative include the Liquid Fertilization Project in 1999 and a joint project in 2006 with Mitsubishi under the Clean Development Mechanism (CDM) Project of the 1997 Kyoto Protocol.

The launch of the solar power plant coincides with ADI’s 25th year in the industry. “This year, we are giving the local potable alcohol industry its first solar power generation facility,” Lucio Tan Jr said.

The facility is composed of 8,160 panels. It occupies about 27,000 square meters within an industrial area, where the 17-hectare ADI plant in Barangay Malaruhatan, Lian, Batangas is located.

Some 150 technical staff and construction personnel were commissioned to finish the project within two months since its groundbreaking in January this year.

ADI was established in 1990 under the company Absolut Chemicals Incorporated, which was engaged in the manufacture of ethyl alcohol and liquefied carbon dioxide as fermentation by-products used for producing soft drinks, among others.  – Rappler.com