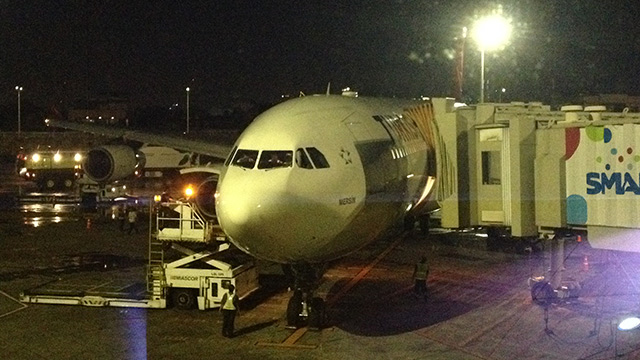 Flight TK084 from Istanbul Atatürk Airport is the culmination of an expanded air services agreement between the Philippines and Turkey signed in November 2014.

The approximately 12-hour flight is scheduled Mondays, Wednesdays, and Saturdays, arriving in Manila at 6 pm and departing for Istanbul at 8:50 pm, utilizing Airbus A340s.

Businessmen, tourists, and transit passengers seeking a gateway to Europe are the target clients of the direct Istanbul-Manila flight. Turkey is accessible to 3 continents – Asia, Europe, and Africa, providing for seamless transfers.

The Philippines is the 109th country in Turkish Airlines’ network, with Manila as its 264th destination, and the 32nd point in its network in Asia and the Far East.

In a statement, Turkish Airlines Chief Executive Officer Temel Kotil said the airline is leveraging on global renewed interest in the Philippines, particularly its economic growth in years.

“We’re very excited to bring our renowned inflight services to Filipinos, and we hope that our new flights to Manila will boost trade between our two countries,” Kotil said.

A total of 3,731 tourists from Turkey visited the Philippines in 2013, data from the Department of Tourism (DOT) showed.

Philippine Tourism Undersecretary for Tourism Development Benito Bengzon Jr said: “Finally, the long wait is over. The traveling public has been waiting for this.”

Bengzon added that with the direct flight, DOT is now eyeing to double tourist arrivals from Turkey.

The Turkish Ministry of Culture and Tourism reported 3,581 tourists from the Philippines in 2014. 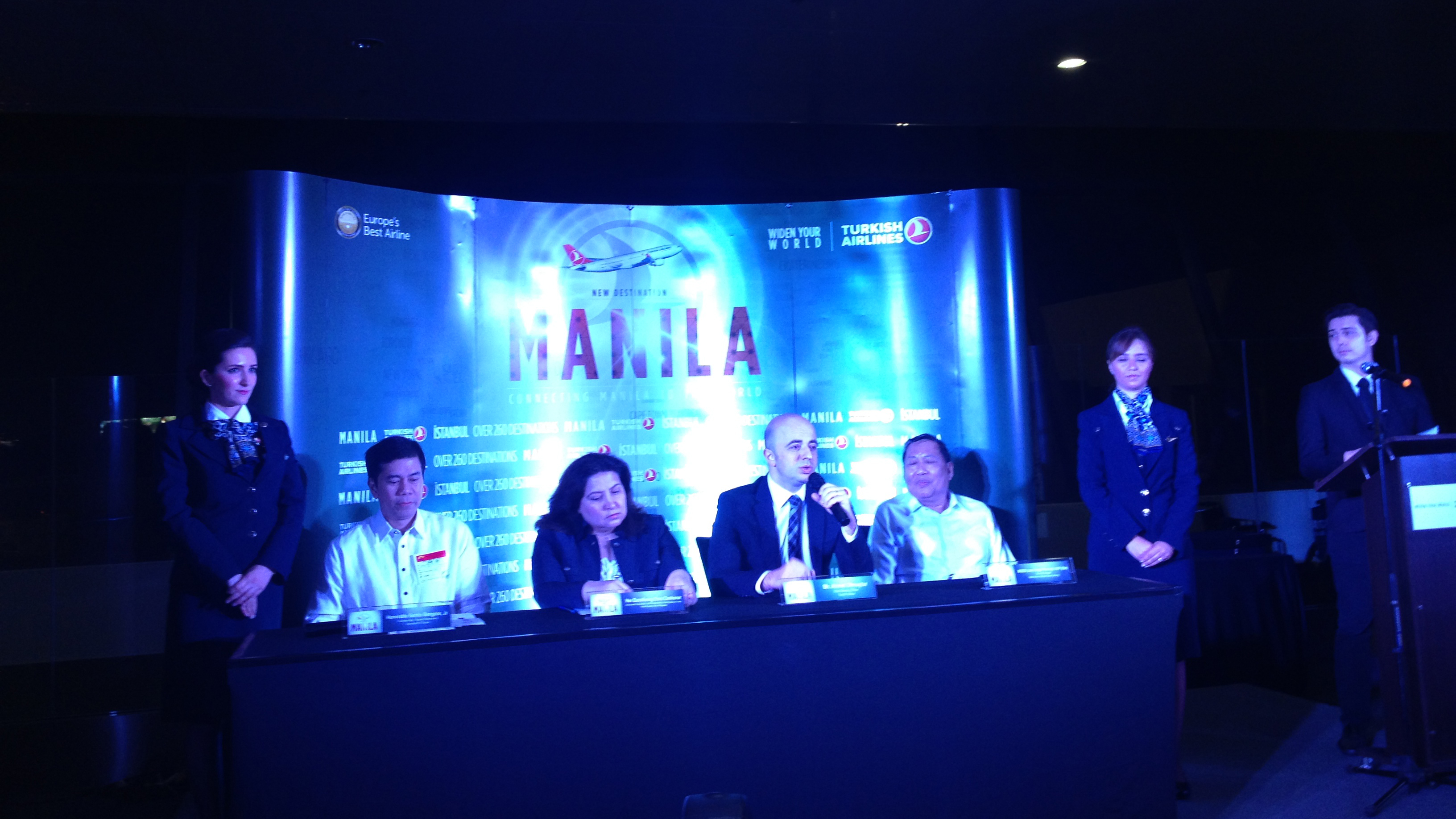 Manila International Airport Authority (MIAA) General Manager Jose Angel Honrado said the maiden direct Istanbul-Manila flight is an opportune time for guests, including members of Turkish media, to see the improvements at NAIA Terminal 1, as its rehabilitation is eyed for completion in May.

Honrado added that including Manila as a “star” in Turkish Airlines’ constellation of destinations provides international passengers more choices, and hopefully, more of them would come to the Philippines for work or leisure.

Turkish Airlines Chief of Marketing and Sales Ahmet Olmustur said an increase in trade volume is seen between the Philippines and Turkey through the Istanbul-Manila direct flight.

“We’re happy to serve the Filipinos and provide them with the best service possible,” Olmustur said.

As of 2013, there are about 5,000 Filipinos in Turkey mostly working as domestic helpers and fishermen – regarded as one of the fastest growing minorities there, along with Russians and Africans.

By best service, Olmustur cited that Turkish Airlines is utilizing a fleet of less than 7-year-old airplanes for its services, plus best cabin food and lounges. He added that the 4-star airline has been ranked the “Best in Europe” for 4 consecutive years now.

For her part, Ambassador of Turkey to the Philippines Esra Cankorur said the reduced travel time between the two capitals would enhance more tourism exchanges, as well as enhanced possibilities for Filipinos to see more destinations in Asia, Europe, and Africa through Instanbul.

This also opens the possibility of more Turkish businesses investing in the Philippines, like construction firms possibly engaging in public-private partnership (PPP) activities in the country, Cankorur added. The construction sector is eyed to contribute generously to Turkey’s gross domestic product (GDP) target as the republic turns 100 in 2023.

Bengzon said the DOT is reiterating its commitment to work closely with Turkish Airlines by organizing more familiarization trips, trade missions, and road shows to position the Philippines as a premier destination. 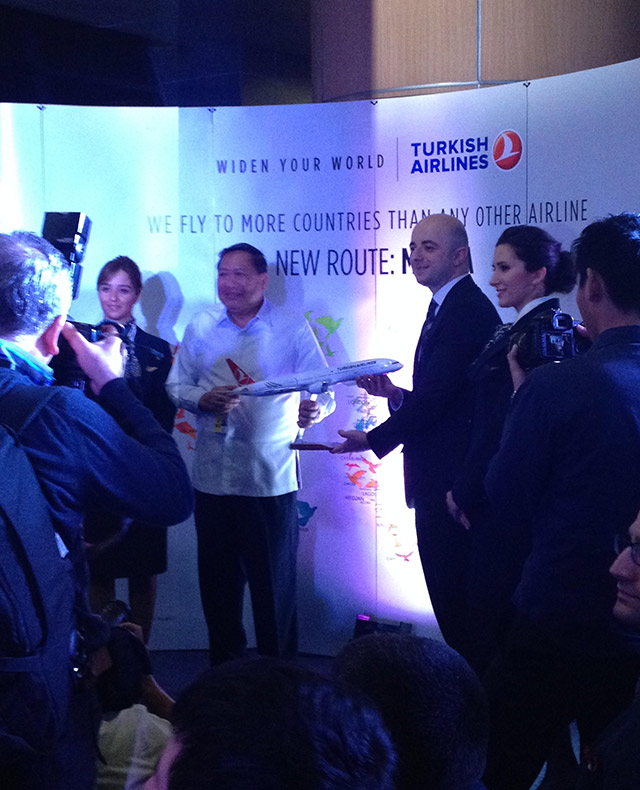 Filipino industrialist Washington Sycip, who witnessed the Istanbul-Manila direct flight launch, said 2015 is a great year for Europe and the Philippines.

He said a lot of German and French trade missions are coming to the country, and added that Turkish Airlines would be the best connecting flight from Paris to Istanbul to Manila, as well as from the 14 points in Germany that the airline services.

German companies like Lufthansa Technik AG (with MacroAsia Corporation) already has a presence in the Philippines, and the country could still attract more, Sycip illustrated.

“You (Turkish Airlines) could be the gateway for German investors – and French investors to come to the Philippines,” Sycip said.

Turkish Airlines is also considering transferring to the NAIA Terminal 3, which is bigger and has been fully operational since August 2014, Olmustur said.

Increasing flights to daily frequencies is also another possibility, which the airline still has to discuss with Philippine aviation authorities, he added.

And how much is it to fly to Istanbul from Manila via Turkish Airlines? Special round trip fares start at €594 (P28,776.02), inclusive of taxes and fees.