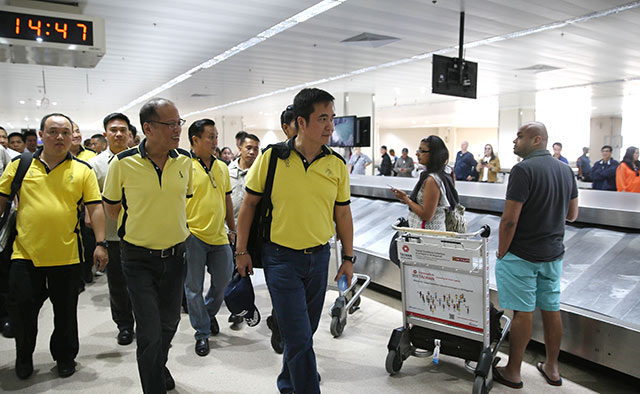 MANILA, Philippines – President Benigno S. Aquino III on Wednesday, April 1, hailed the renovations to the Philippines’ main international airport, expressing optimism it would soon shake off its ranking on one website as the world’s worst airport.

Almost a year after he personally apologized for the failure of air-conditioning at the Ninoy Aquino International Airport (NAIA) Terminal 1, Aquino said the facility appeared to be completely different.

“It’s like I have entered a completely different airport,” he told reporters as he inspected the 34-year-old terminal.

Asked by reporters if the terminal would no longer be called the world’s worst, Aquino told reporters: “That’s up to you, but they even raised the ceiling.”

NAIA – named after the President’s father who was assassinated there in 1983 – topped the list of worst airports on the travel website “The Guide to Sleeping in Airports” from 2011 to 2013.

However in its 2014 survey, Manila terminal improved its standing to only the 4th worst airport in the world, after Islamabad, Jeddah, and Kathmandu airports.

Speaking from the sidelines of the Turkish Airlines’ Istanbul-Manila maiden, direct flight on March 30, Manila International Airport Authority General Manager Jose Angel Honrado said that the NAIA 1 rehabilitation is eyed to be completed May this year. – Rappler.com