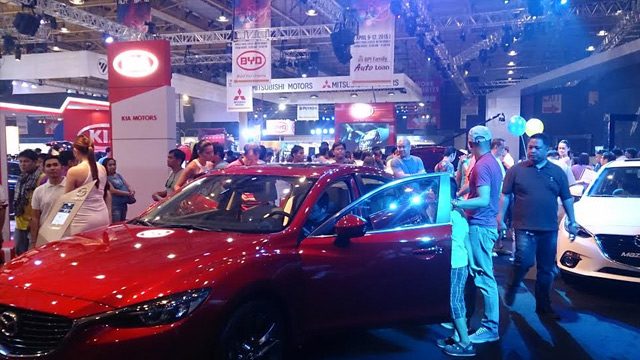 The automotive industry grew by 22% in the first quarter of 2015 and everyone is getting mobilized, Cristobal-Parco said at the 2015 Manila International Auto Show (MIAS) Thursday, April 9.

There are two standout automotive trends driving industry growth – affordable small vehicles and versatile vehicles that can be used for multiple purposes, she explained. The pick-up truck segment has also been surging since pick-up trucks are seen as lifestyle and all-weather vehicles in the city, used for out-of-town excursions and in rough Philippine weather experienced during the typhoon season.

Thus, Cristobal-Parco is hoping that the recently debuted 2-series Active Tourer will resonate with the market. While not strictly affordable, it is priced attractively enough for buyers looking for a step up into premium brands, Parco said.

These trends were confirmed by Kay Hart, managing director of Ford Philippines.

“People are not just buying a truck for work now but as recreational vehicles. I think the vehicles that do well at the moment are the ones that match lifestyles well,” Hart said.

Another reason why pick-up trucks have surged in popularity is that they are now available with all the amenities once only seen in cars.

Hart also mentioned that Ford’s entry-level sport-utility vehicle (SUV) is leading the sales this year. The Ford EcoSport sells at a starting price of P775,000 (17,375.89).

She said that buyers are drawn by the vehicle’s affordability, combined with its SUV functionality in a small package.

“The number of options consumers have to match a vehicle with their lifestyle is just great at the moment,” Hart said. One unwelcome issue for new car buyers is the new “no registration, no travel” policy implemented by the Land Transportation Office (LTO) on April 1.

Cristobal-Parco said the policy is good but questioned its implementation before the LTO system and automotive dealers were fully prepared.

“I think it’s good that the process has been put in place except that it created a lot of anxiety and unnecessary customer complaints because it was implemented just before the long weekend,” she added.

Cristobal-Parco said that despite the issue being discussed since 2014, all the stakeholders involved should have had a dialogue to discuss the seamless implementation before its inception.

The timing of the policy has been criticized by other government agencies as well. BMW dealers also reported to her that the LTO was not ready with all the license plates on the eve of the policy’s implementation.

“According to our dealerships, on Holy Wednesday, April 1, they were still waiting for plates and when the liaison officer visited the LTO office, he found out that the system was offline so they weren’t generating all the documents needed to be processed,” Cristobal-Parco said.

The LTO had said the delay was chiefly because of delinquent dealers.

Cristobal-Parco said  she personally believed that in light of the continued delays, the enforcement of the policy should be delayed so that all the stakeholders can have a dialogue to determine the seamless implementation of the policy. – Rappler.com