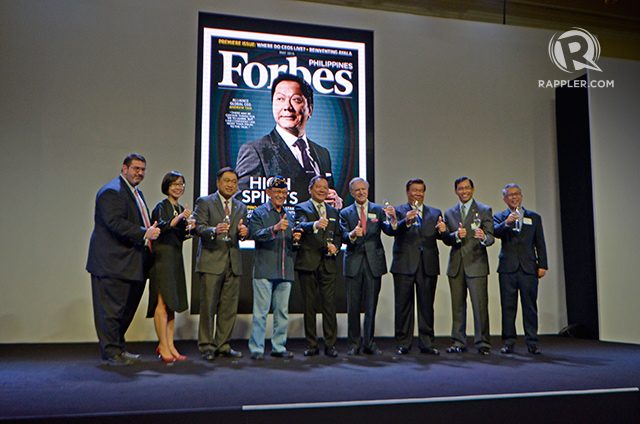 MANILA, Philippines – The Philippines has joined the list of countries under the umbrella of global media giant Forbes with the official launch of Forbes Philippines on Tuesday, May 5.

The launch comes at an economically auspicious time for the Philippines, which  Forbes Asia president William Adamopoulos described as among the “fastest growing emerging markets” in the world.

“The country is a hot economy, one of the world’s fastest growing emerging markets and a lot of people around the region are talking about it at the moment,” said Adamopoulos.

The Philippines is also under the international spotlight as this year’s Asia-Pacific Economic Cooperation (APEC) host and chair. In October,  Forbes will host its own Global CEO conference featuring the world’s most economically powerful people in Manila. The magazine, which will have an initial circulation of 10,000 per month, marks the 38th local publication under the Forbes brand.

Forbes Media, known for its top rich lists, also publishes Forbes Asia, its flagship magazine in the region, and 8 other local Asian editions in China, India, Indonesia, Japan, Korea, Mongolia, Thailand, and Vietnam with a total circulation of 500,000. The magazine seeks to gain insights from Philippine government officials and business leaders, who attended the launch, as it aims to highlight the entrepreneurship aspect of Philippine business.

“Forbes’ longstanding mission is to champion entrepreneurship and free market capitalism and I am looking forward to the countless stories that will chronicle the country’s journey to enduring prosperity,” Forbes Vice-Chairman Christopher Forbes said in his speech at the event. In Asia, Forbes.com is the global product while Forbes Asia connects the CEOs and high-level business leaders across the region every month.

The purpose of the local editions is to go in deep into what is happening in each individual country, Adamopoulos shared.

“Each of those products are a bit different. They share the DNA but the content is different. It works because the local partners are in the local ad markets and we’re in the regional and global markets with Forbes Asia and Forbes.com,” he said.

For his part, Forbes Philippines editor in chief Roel Landingin believes that the publication can add to the local media landscape by virtue of its format.

“As a magazine our work cycles are longer than most so when we talk to businessmen, we hope to be able to draw out some of the really deep thinking and strategic considerations that they have about their business,” Landingin said. Forbes Asia editor Tim Ferguson also believes the time is right for such a format to cover local business as the industries are still driven by really big players.

“We’ve noticed that for all the successes of the star companies in the Philippines, the development of the entrepreneurship or venture sector is still a work in progress here,” Ferguson said.

He added, “It needs the moral support a voice of entrepreneurial capitalism can offer, so I think in that respect we’re not too late to the party. – Rappler.com