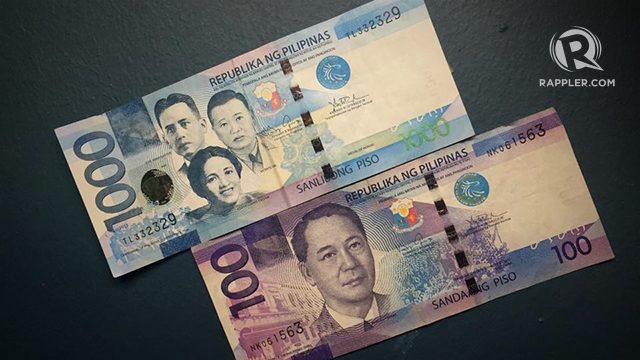 MANILA, Philippines (UPDATED) – Why so similar?

Senator Aquilino “Koko” Pimentel III asked the Bangko Sentral ng Pilipinas to explain why the P1,000 and P100 banknotes are almost identical to each other, thus confusing the public.

Pimentel issued the call Thursday, May 14, after receiving numerous complaints over the similarity between the P1,000 and P100 bills, which are included in the New Generation Currency (NGC) banknotes. “The BSP should explain why they are too similar and state if there are plans to improve the situation,” Pimentel said.

The NGC bills, launched by BSP in December 2010, will be the currency in circulation starting January 2016. (READ: BSP starts shift to ‘New Generation Currency’ bills Jan 1)

“If we really use our eyes and read the inscription, and not just look at the color, it’s easy to detect the difference between the P1,000 bill and the P100 bill,” the BSP monetary stability sector head said Thursday, following a central bank briefing on its monetary policy stance.

He added there is no plan to change the design because it has been approved by the BSP Monetary Board and the President of the Republic.

However, Guinigundo said that BSP is trying to adjust the color of the bills “to make sure that blue is really blue and violet is more violet.”

This is to improve the contrast between the two, he added.

BSP earlier said the NGC series is user-friendly and allows easy identification of each denomination because of the dominant color that uses distinct and primary inks.

BSP also introduced several security features, such as the intaglio-printed front side of the currency to give an embossed feel and help the visually-impaired differentiate each denomination.

Big numerals corresponding to the denominational value are also printed on both sides of the NGC banknotes, in addition to new and enhanced security features to protect the currency against counterfeiters.

The central bank earlier reminded the public that they may continue to use the New Denomination Series (NDS) banknotes until December 31, 2015. After this, the NDS banknotes will no longer be accepted for payment transactions. – with a report from Chris Schnabel/Rappler.com