Airbus A350 XWB in Manila for preview flights Facebook Twitter Copy URL
Copied
PAL expresses interest in the widebody airliner, while Cebu Pacific says it has no requirement yet for aircraft as big as A350 XWB

MANILA, Philippines – Airbus’ A350 extra widebody (XWB) airliner arrived in Manila on Wednesday, May 20, for a series of demonstration flights and ground displays.

Seating up to 369 passengers in a two-class layout, it features the latest aerodynamic design, carbon fiber fuselage and wings, plus new fuel-efficient Rolls-Royce Trent XWB engines. It also boasts of 25% reduction in fuel burn and emissions and lower maintenance costs.

In-flight comfort is the lure for passengers, as A350 XWB has more personal space in all classes. In the premium cabin, airlines can install lie-flat seats, while the extra wide fuselage allows for full service or budget layouts in economy class. 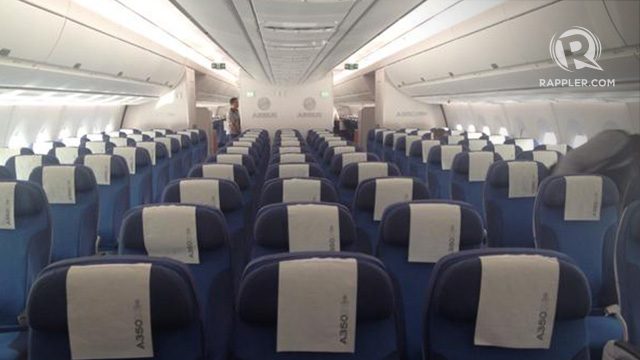 A350 XWB marketing director Mike Bauser said the aircraft is proving to be successful in the Asia-Pacific region, which has a large traffic volume that drive the need for a new aircraft.

Bauser added that 3,500 new twin-aisle aircraft are needed for the region. 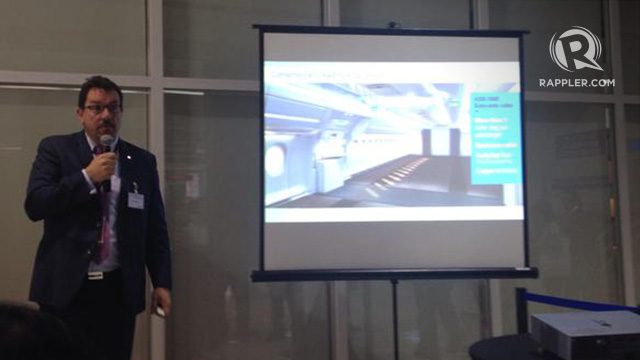 The A350 was designed by Airbus with Asian airlines in mind, since it could fly on routes up to 8,000 nautical miles for a non-stop service from Manila to Europe or North America.

To date, Asia-Pacific carriers have ordered a total of 244 A350 XWBs, about a third of the 780 orders for the aircraft worldwide.

Qatar Airways, the launch customer, received its A350 XWB in December last year and made a firm order of 80 aircraft.

A Philippine carrier has yet to order A350 XWB, Bauser said. But interest in the aircraft from airlines worldwide is growing, he added.

Through a 90-minute demonstration flight and ground display, Airbus on Wednesday showed off its latest widebody airliner to representatives from the government, airlines, aviation authorities, and members of the press. Among them was Philippine Airlines president and chief operating officer Jaime Bautista, who said the aircraft is a viable option to service the flag carrier’s long-haul routes.

“Of course we will study it very carefully,” Bautista said. A350 XWB is a possible replacement for the airline’s long-haul fleet that include A340 and Boeing 777, he said.

Bautista added that the flag carrier, which is undergoing a refleeting program, needs to have more long-haul aircraft for expansion to Europe and North America.

PAL is set to fly to Australia and New Zealand on December 1 after launching flights to New York in the United States via Vancouver in Canada on March 15 this year.

Cebu Pacific president and chief executive officer Lance Gokongwei appeared to be not interested in acquiring A350 XWB for now.

“We don’t have any long-haul routes at this point that require this range,” Gokongwei said.

Cebu Pacific’s Manila-Riyadh route utilizes A330. The planned Hawaii and Guam routes within the year could be serviced by an A330 or A320, respectively, Gokongwei added. “So this (A350 XWB) is really a plane that is best suitable for West Coast or London.  Everything is still under review at this point. And, at this point, we don’t have definitive plans for the very long haul,” he said.

Cebu Pacific is set to fly between Manila and Doha, Qatar, on June 4.

As of end-April this year, A330 is the major selling Airbus aircraft for its widebody airliners, and PAL operates 19 and Cebu Pacific utilizes 6 of this aircraft model, said Airbus communications director for Asia Sean Lee.

Airbus executive vice president for Asia Jean-François Laval said the Asia-Pacific region is a core market for Airbus, with about 30% of all orders coming from the region.

The region also has the world’s largest future air transport market, with 6.7% annual growth in passenger traffic. Asia-Pacific also has demand for 12,470 new passengers and freight aircraft valued at $2 trillion.

In the next 20 years, 40% of total world demand would come from the region. China will account 43% of demand in region while India, 12%.

Laval said the Philippine market is developing and is gearing up for more long-haul destinations.

“The Philippines is also doing very well, with the local tourism industry booming and more Filipinos flying [out] of the country,” Laval said. He expressed optimism that local carriers would, in time, add A350 XWB to their fleet. – Rappler.com