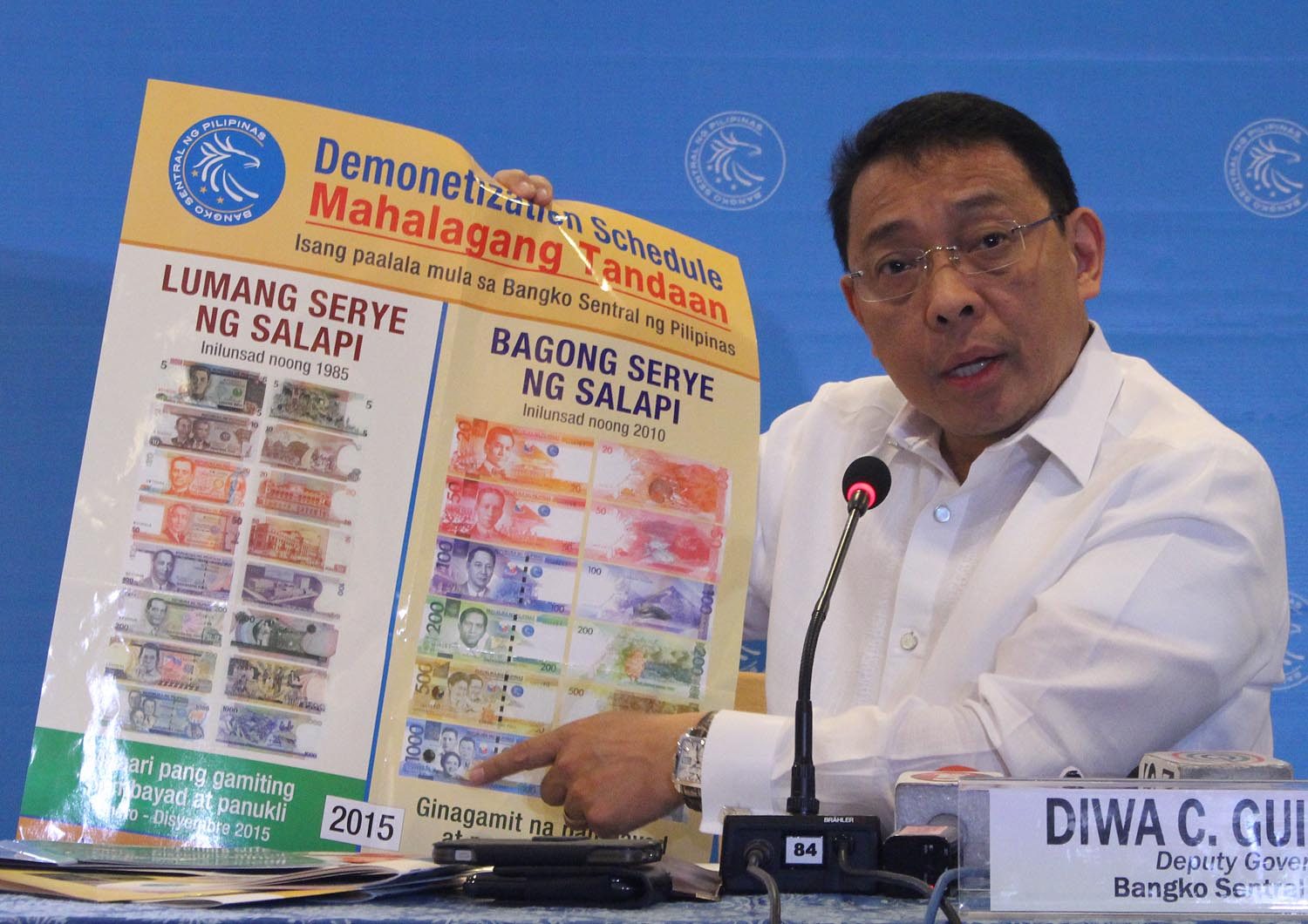 Facebook Twitter Copy URL
Copied
From January 1 to December 31, 2016, unused old banknotes would have to be exchanged in authorized banks and the BSP. After that period, these bills will have no monetary value.

In a press conference Thursday, May 21, Guinigundo said that from January 1, 2016 up to December 31, 2016, the old banknotes can still be exchanged in authorized agent banks and the BSP Cash Department.

But starting January 1, 2017, the old banknote series will be fully demonetized or without monetary value.

The demonetization process is in line with the provisions of Section 57 of Republic Act No. 7653 or the New Central Bank Act, authorizing the BSP to replace banknotes that are more than 5 years old. The old banknotes have been in circulation for 3 decades.

The demonetization policy will result in the use of the New Generation Currency (NGC) Banknotes introduced in December 2010 as the single currency series in the country. BSP earlier said the NGC series is user-friendly and allows easy identification of each denomination because of the dominant color that uses distinct and primary inks.

The central bank also introduced several security features, such as the intaglio-printed front side of the currency to give an embossed feel and help the visually-impaired differentiate each denomination.

Big numerals corresponding to the denominational value are also printed on both sides of the NGC banknotes, in addition to new and enhanced security features to protect the currency against counterfeiters. BSP shared the following reminders so the public will know what to do leading to the demonetization of the old banknotes series:

1. The public may continue to use the old banknotes until December 31, 2015, in paying and buying of goods and services and other business or financial transactions requiring the use of cash. After that date, the old  banknotes will no longer be accepted for payment transactions.

2. From January 1, 2015 to December 31, 2016, the public, without charge, may exchange with authorized financial institutions (universal and commercial banks, thrift banks, and rural as well as cooperative banks), their old banknotes with the New Generation Currency (NGC) Series at full face value. The public may also opt to exchange their old banknotes with the BSP or any of its regional offices or branches around the Philippines.

3. Government institutions holding old banknotes which could not be exchanged during the prescribed period, such as banknotes used as evidence in a litigation case, will have to request the BSP Cash Department in writing, within the period of exchange, for a special exchange arrangement.

4. For overseas Filipinos who still have old banknotes but could not exchange within the prescribed period, may register online starting October 1, 2016 to December 31, 2016 through the BSP website.  These old banknotes may be exchanged with the BSP within one year from date of registration.

5. Starting January 1, 2017, the old banknotes that have not been exchanged shall no longer have any monetary value, and are considered demonetized.

On May 14, Senator Aquilino “Koko” Pimentel III asked the BSP to explain why the P1,000 and P100 NGC banknotes are almost identical, thus confusing the public.

But Guinigundo responded the P1000 and P100 bills seemed to look similar in terms of color.“If we really use our eyes and read the inscription, and not just look at the color, it’s easy to detect the difference between the P1,000 bill and the P100 bill.”

He added there is no plan to change the design because it has been approved by the BSP Monetary Board and the President of the Republic. BSP though is trying to adjust the color of the bills “to make sure that blue is really blue and violet is more violet,” Guinigundo said. – Rappler.com