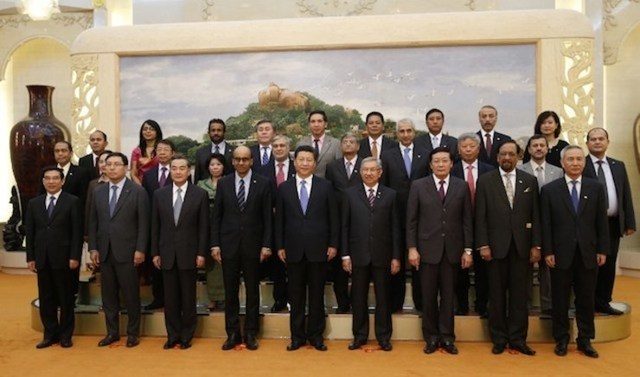 SINGAPORE, Singapore – The China-led Asian Infrastructure Investment Bank (AIIB) will be operational by the end of this year, prospective founding members said Friday, May 22, after a 3-day meeting in Singapore to discuss policies.

The chief negotiators’ meeting involving the AIIB’s 57 prospective members “concluded discussions and finalized the articles of agreement for the AIIB,” said a statement by the bank’s interim multilateral secretariat.

The articles of agreement are expected to be “ready for signing by end-June 2015 and the AIIB would be operational by the end of this year, the statement said.

“In the 3-day meeting, the chief negotiators also discussed the draft environmental and social framework and draft procurement policy framework, among other topics,” it added.

The meeting in Singapore, the 5th round of talks since the bank was mooted in October, was co-chaired by Shi Yaobin, China’s vice minister of finance, and Yee Ping Yi, deputy secretary of Singapore’s finance ministry.

The conclusion of the meeting came a day after Japan’s Prime Minister Shinzo Abe announced a $110 billion investment plan for infrastructure projects in Asia in an apparent move to counter the launch of the AIIB.

The sum is slightly higher than the expected $100 billion capital of the AIIB. (READ: Japan PM unveils $110B plan for Asian infrastructure)

Japan and the United States were the biggest standouts earlier this year when Beijing began courting members for the AIIB.

Washington led a high-profile, and ultimately unsuccessful, attempt to dissuade allies from taking part in the project, which critics say will not demand the same good-governance and environmental standards imposed by other international bodies, such as the Asian Development Bank, a long-established body in which Tokyo plays a key role.

But supporters say fears over undue Chinese influence are overblown, and that the participation by more than 50 countries, including ones as diverse as Britain and Iran, will dilute Beijing’s power. – Rappler.com