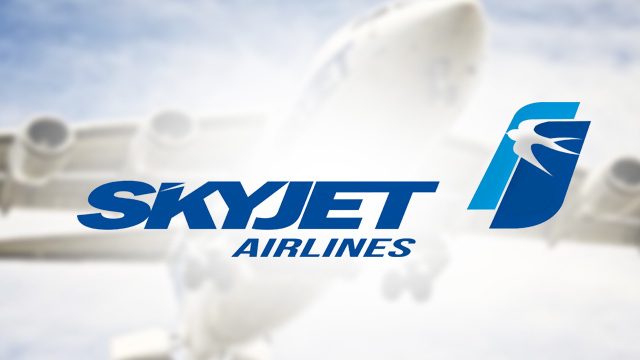 Facebook Twitter Copy URL
Copied
‘Our sincerest apologies for whatever inconvenience that may have been created as a result of certain extreme actions on our part,’ writes airline president Dino Chua to Civil Aviation Authority of the Philippines director general William Hotchkiss III

MANILA, Philippines – Leisure airline Magnum Air Incorporated (Skyjet) has asked the Civil Aviation Authority of the Philippines (CAAP) to lift the suspension of its operations following its submission of corrective actions to the security concerns raised by European Union aviation experts.

The airline is also withdrawing the case it filed versus CAAP before the Pasay City Regional Trial Court, seeking P20 million ($445,740.62) in damages due to the suspension of its operations on May 18.

“We are also pleading for the immediate lifting of our suspension order as soon as the compliance and corrective actions are acceptable,” he said.

Skyjet also agreed to voluntarily ground all its aircraft starting Thursday, June 4, to allow for reevaluation or inspection, including assessment, according to its June 3 letter.

“We fully understand that safety and security is paramount to CAAP. We recognized the power and authority of the director general to ensure public safety above all,” he added.

“On behalf of the Skyjet Airlines family, our sincerest apologies for whatever inconvenience that may have been created as a result of certain extreme actions on our part,” Chua said.

CAAP suspended the Airline Operator Certificate (AOC) of both Skyjet Airlines and Southeast Asia Airlines International Inc. (Seair-I) on May 15, citing various safety shortcomings that apparently did not meet the prescribed rules and standards under the Philippine Civil Aviation Regulations (PCAR) and the safety issues raised by EU aviation experts.

The report submitted by the EU Assessment Team showed that Skyjet had problems in its flight data monitoring, quality assurance, maintenance and overall airworthiness.

Skyjet, owned by the Solar Group, flies from Manila to Basco, Batanes as well as Busuanga in Palawan with its BAE 146-100 and Dornier 328 aircraft.

Seair-I, on the other hand, flies from Manila to Basco in Batanes, Caticlan, and Tablas Island in Romblon with a fleet of two turbo-prop Dornier 328 aircraft. – Rappler.com