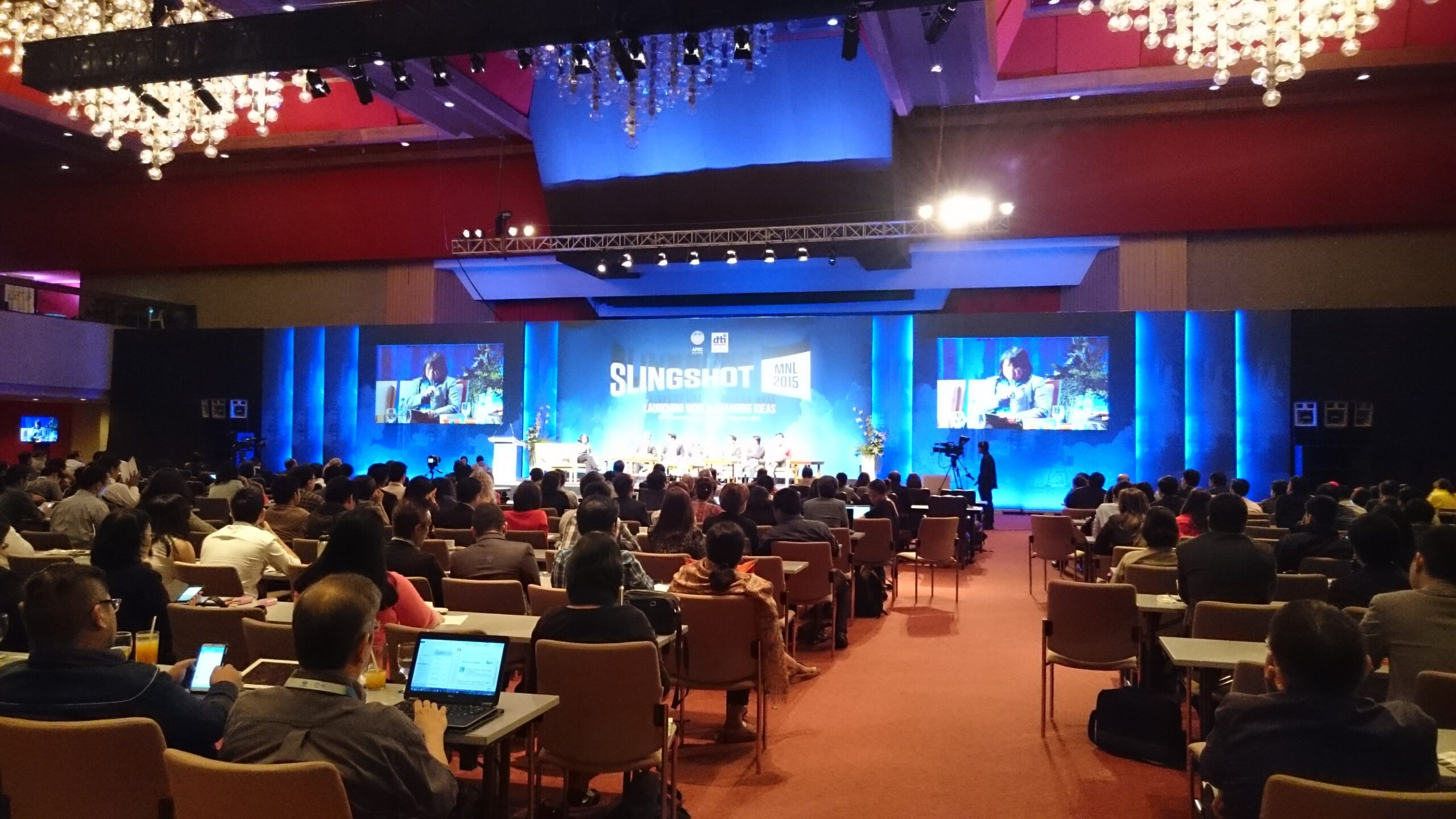 MANILA, Philippines – The rapidly growing Philippine startup community is pushing toward making a name for itself globally and the government’s new initiative prioritizing small and medium enterprises (SMEs) development is lending it a helping hand.

A major milestone in this newfound partnership was the launch of the startup focused Asia-Pacific Economic Cooperation (APEC) event, SlingshotMNL, on Monday, July 6.

SlingshotMNL, which was inspired by the idea of catapulting micro and small to medium enterprises (MSMEs) into the global stage, brings the ideas of thought leaders from the United States, South America, and Asia into a forum that aims to figure how to help startups have the biggest possible impact on the Asia-Pacific region.

“Its an opportunity for us to put the Philippine startup community on the map,” said serial entrepreneur Jojo Flores, vice president of startup incubator Plug and Play Tech Center.

Globally, the Philippines is mostly known for its service industries especially business process outsourcing (BPOs), as well as the overseas Filipino workers (OFWs) sector, he explained.

“I think one of the strategic steps that we’re taking with the government is taking the startup community to the next level in order to encourage more innovation and product-based companies,” Flores said.

He added that this “plays in well with APEC” because while lot of firms are looking at companies in the region, the Philippines is often overlooked.

“This kind of event will help change that perception…We can communicate to our neighbors and the rest of the world that we’re not just service-based but that we can also do products and innovation,” he said.

Trade Secretary Gregory Domingo, who opened the event, said that “endeavors like SlingshotMNL enable MSMEs to participate in the global value chain.”

The Department of Trade and Industry organized the event with the Department of Science and Technology (DOST), in partnership with prominent organizations in the startup community such as incubator Ideaspace and Globe telecom-owned venture capital firm Kickstart.

Domingo noted that startups have the potential to contribute greatly to the economies in which they work through the product and process innovations that they introduce into the market.

MSMEs account for 97% of all enterprises in the Asia-Pacific. They employ 50% of the region’s workforce and comprise 20% to 50% of the gross domestic product (GDP) of Asia-Pacific economies. 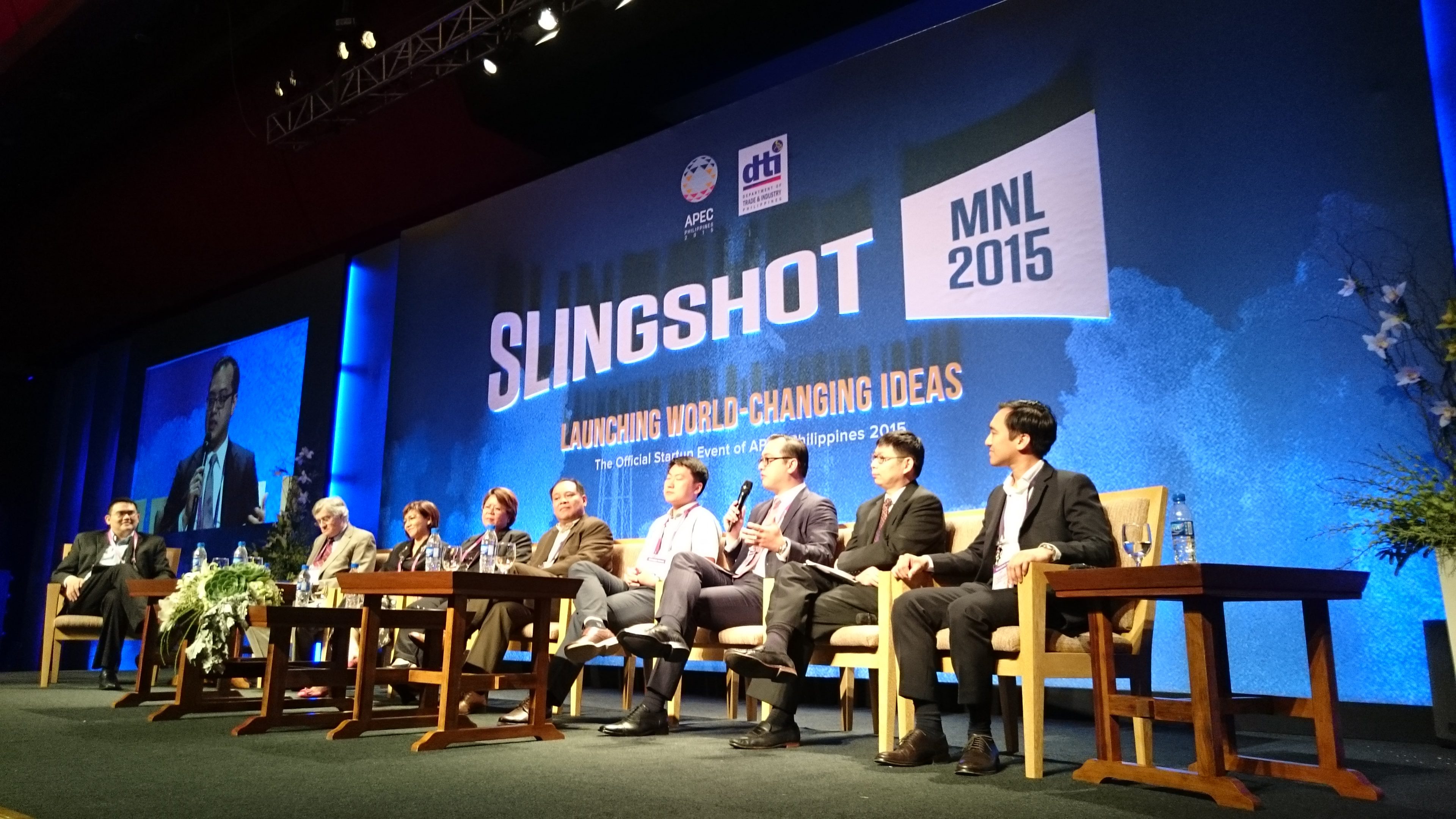 The scope of SlingshotMNL is not limited to the Philippines. With more than 600 million people, ASEAN has become the world’s fifth largest market next to China, India, Europe, and North America.

The economies of the Asia-Pacific Rim comprise an even bigger chunk of the global economic pie. In 2012, APEC member-economies represented 40% of the world population at 2.8 billion people, and accounted for 47% of world trade at $21 trillion. It contributed 57% of the global GDP with $41 trillion.

Earl Valencia, Ideaspace founder and president, described the implications of this bullish climate to APEC startups: “SlingshotMNL is really an apt title for the conference, especially since it describes where the Philippines and the Asia-Pacific is from an economic perspective. We are primed for rapid growth and there is no better time to be a startup here.”

SlingshotMNL 2015 was also designed to bring the startup community together. It features 8 workshops, 3 pitching competitions, networking receptions, and an exhibition of more than 100 startups from Asia and the Philippines. Over 1,000 delegates and other participants signed up for the conference.

The startup scene has dramatically improved from 5 years ago, but the community still has to build up a critical mass of quality startups that  would attract investors without the need for events like SlingshotMNL, Flores said.

“A good number to target would be to produce 100 viable startups a year, right now we produce less than 50,” he added.

Flores defined a viable startup as one with a team working full time on a product or innovative process. Today the community is still filled with part-time or school projects. The push toward a critical mass could come from the community through developing a collaborative and inspiring environment said Stanford University professor Richard Dasher, a speaker at the event.

“It’s as much about community building as anything else. Not just the funding from firms and the support that incubators can provide, but the feeling of being on a winning team,” Dasher said. – Rappler.com