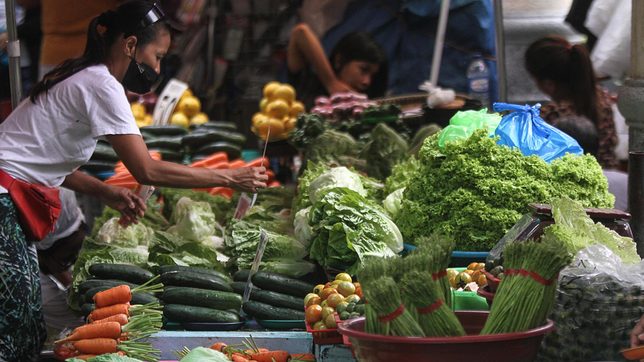 VEGETABLES. A market vendor in Manila arranges vegetables for sale on September 29, 2021.

Facebook Twitter Copy URL
Copied
(1st UPDATE) The November figure is slower than the 4.6% registered in October, but it is also above the government’s target range of 2% to 4%

MANILA, Philippines – Inflation eased to 4.2% in November amid a slower rise in food prices, the Philippine Statistics Authority reported on Tuesday, December 7.

While the latest figure is slower than the 4.6% registered in October, it is also above the government’s target range of 2% to 4%.

So far, inflation has settled within the target range only once in 2021, at 4% in July.

Food inflation slowed down to 3.9% in November due to improved harvest and favorable weather conditions.  Meanwhile, higher electricity (4.6%) and transportation costs (8.8%) offset the deceleration in food prices.

ING Bank Manila senior economist Nicholas Mapa said that with elevated global crude oil prices resulting in higher electricity bills and diesel costs, “the central bank is all but sure to miss its inflation target for the year.”

“Nonetheless, average inflation is still projected to fall within the government’s target range in 2022 and 2023 as supply-side pressures moderate,” the BSP said.

While oil prices rose for the most part of November, a cut of P1 to P1.20 per liter for gasoline and as much as P0.70 for diesel by the last week of the month helped to cool down prices.

The BSP views upticks in prices as transitory, pushing back against calls for a hike in interest rates. – Rappler.com