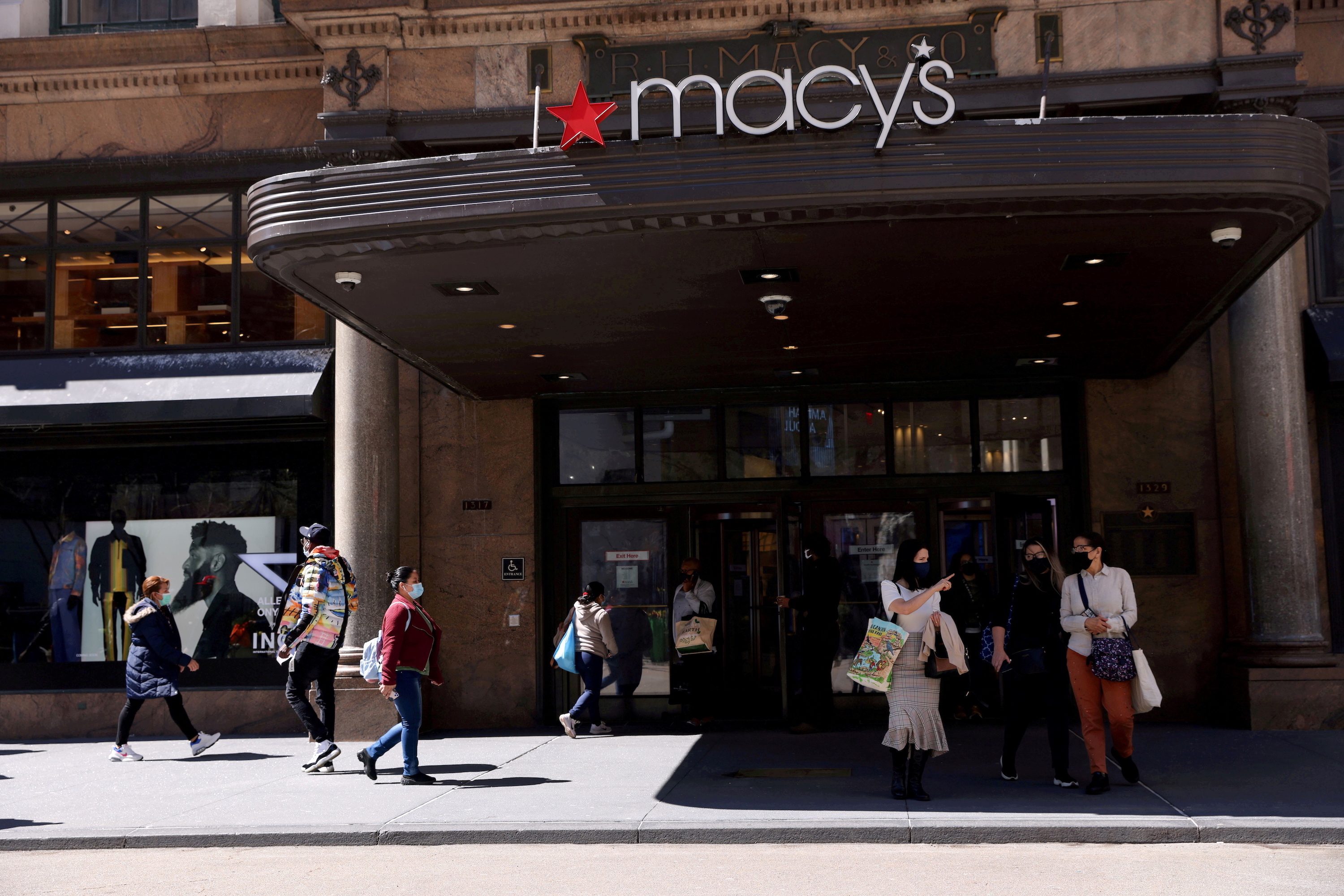 INFLATION. Shoppers are seen outside Macy's in the Manhattan borough of New York City, March 30, 2021.

Price and wage increases running at multi-decade highs may challenge Federal Reserve officials this week as they try to maintain a balance between ensuring inflation remains contained and giving the economy as much time as possible to restore the jobs lost since the pandemic.

With investors already wagering the Fed will raise rates twice next year, a much sooner and faster pace than policymakers themselves have projected, economists at Goldman Sachs have become the latest to accelerate their rate hike call – moving it ahead a full year to July 2022.

By then, Goldman economist Jan Hatzius and others wrote that they expect inflation as measured by the closely monitored core personal consumption expenditures price index, still to be above 3% – a run of inflation not seen since the early 1990s and one well above the Fed’s 2% target.

Aspects of the job market, particularly the labor force participation rate, are unlikely to have recovered to pre-pandemic levels, and would seemingly still be short of the “maximum employment” the Fed has promised to restore before raising interest rates. But at that point, the Goldman team wrote, Fed officials would “conclude that most if not all of the remaining weakness in labor force participation is structural or voluntary,” and proceed with rate hikes to be sure inflation remains controlled.

“Since the [Federal Open Market Committee] last met in September, the unemployment rate has fallen further, average hourly earnings and the employment cost index have posted strong increases, inflation has remained high,” they wrote, challenging the Fed’s narrative that inflation will pass on its own without using a rate increase to tighten credit conditions and slow business and household purchases.

The Fed meets this week and will issue a new policy statement on Wednesday, November 3, at 2 pm (1800 GMT), with a press conference following at 2:30 pm (1830 GMT) by Fed Chair Jerome Powell. Officials are expected to approve plans for scaling back their current $120 billion in monthly bond purchases that would phase them out completely by the middle of next year – a first step away from the core policies put in place in early 2021 to battle the economic fallout from the pandemic.

Fed officials have tried to separate that decision from their eventual, and more consequential, call on when to raise interest rates. The benchmark for a rate hike was established last year when the Fed said its policy interest rate would not be increased until the economy had returned to maximum employment, and “inflation has risen to 2% and is on track to moderately exceed 2% for some time.”

At the time, policymakers thought they would have ample time to eventually phase out the bond purchases with little risk of inflation. Even as prices started to accelerate earlier this year, Fed officials argued the high pace would prove “transitory” and not rush them into a rate hike.

The timetable, however, may be collapsing on them.

Goldman economists now see a “seamless” handoff from the bond taper to rate increases next year, a view that parallels the view now prevailing in interest rate futures markets.

According to the CME Group’s FedWatch tool, trading in federal funds futures contracts now implies a greater than 65% probability that the Fed will raise rates in June, right as the taper is expected to end, with a second increase expected in November. A month ago, rates market indicators signaled less than a 20% likelihood of a rate hike as early June and a comparably negligible probability for two hikes next year.

It may be a confusing moment when it comes to inflation. Blamed at first on what were expected to be temporary supply disruptions and a bulge of consumer spending on goods that were becoming hard to find in some cases, the pace of price hikes has remained higher for longer than expected.

Goods inflation is not only expected to ease next year, but actually reverse in a round of falling prices. But the cost of services is expected to make up the difference, and particularly if a recent jump in employee compensation proves persistent.

The rise in wages and benefits will present a particular challenge to the central bank to determine if employees are getting paid better because productivity is rising, or because job markets and the numbers of available workers have been thrown out of synch by the pandemic.

One would be seen as a positive development; the other as potentially raising inflation risks even higher.

“All this puts Powell in the hot seat at the November meeting to a much greater extent than seemed likely even a few weeks ago,” as he tried to balance a committee roughly evenly split between those ready to raise rates next year and those ready to show more patience, wrote Evercore ISI vice chair Krishna Guha.

“None of this proves that the transitory thesis will ultimately be wrong,” he wrote, but the “tests for believing that excess inflation will likely prove transitory have not aged well.” – Rappler.com