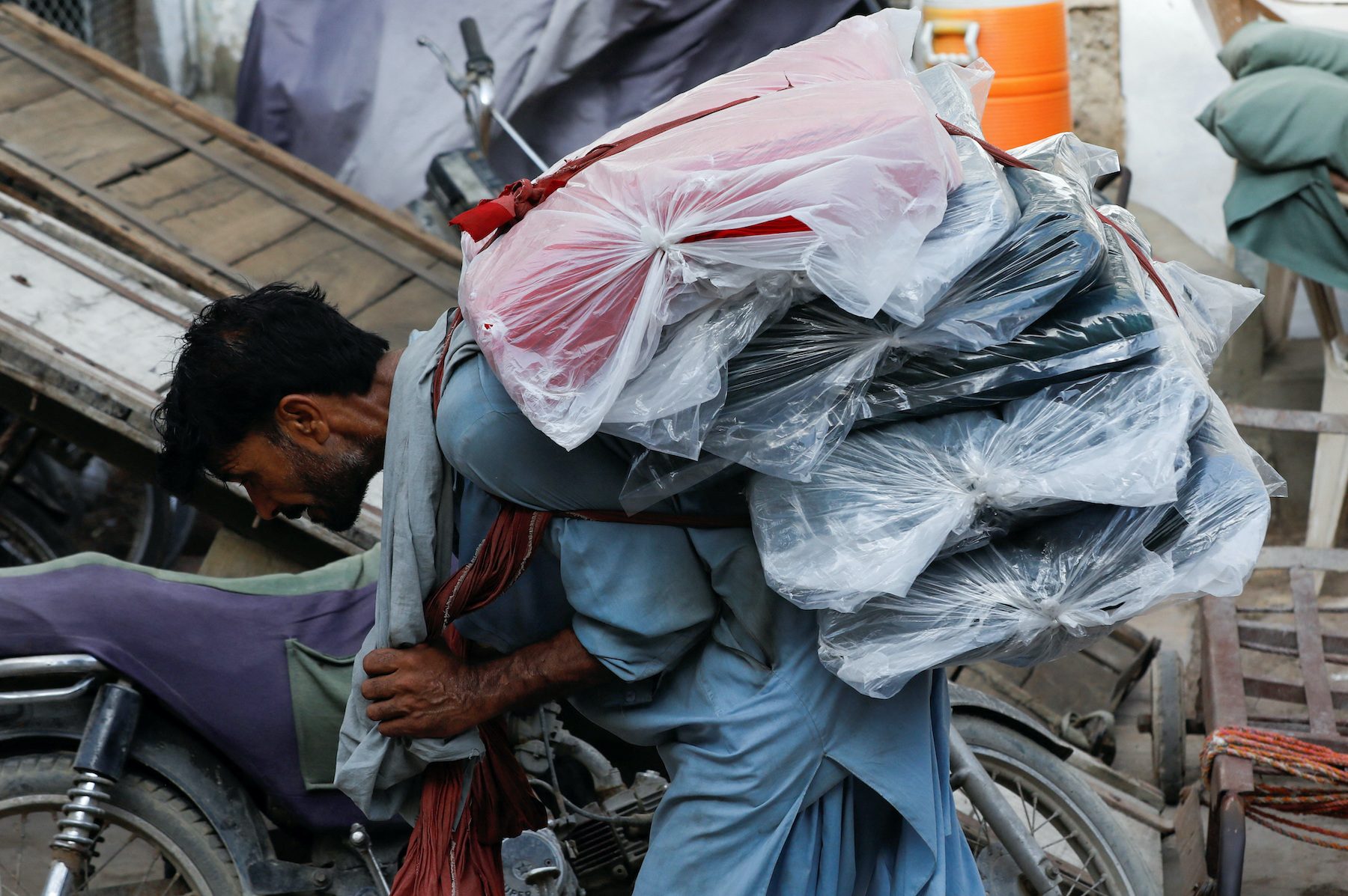 LABOR. A laborer bends over as he carries packs of textile fabric on his back to deliver to a nearby shop in a market in Karachi, Pakistan, June 24, 2022.

ISLAMABAD, Pakistan – Pakistan said on Tuesday, June 28, that it has received economic and financial targets from the International Monetary Fund (IMF) that once agreed and ratified should pave the way for the multilateral lender to unlock a suspended bailout program.

Pakistan desperately needs the money to avert a balance of payment crisis that is being brought closer by the day as a result of the sharp rise in global oil and commodity prices.

Central bank foreign currency reserves have fallen to as low as $8.2 billion, barely enough to cover six weeks of imports, and the economy is reeling from a sharp depreciation in the Pakistani rupee and double-digit inflation.

Pakistan entered a $6-billion IMF program in 2019 spread over three years and three months, but with less than half the amount disbursed the IMF suspended the bailout earlier this year after the previous prime minister, Imran Khan, announced unfunded subsidies for the oil and power sectors. Khan’s government was ousted in April.

Needing to get back in the IMF’s good graces, the new government, led by Shehbaz Sharif, has removed the subsidies, and made adjustments in a budget presented on June 10 that aimed at reducing the government’s fiscal deficit, which was one of the IMF’s key requirements.

Delivering an update following talks between Pakistani and IMF officials, Finance Minister Miftah Ismail said in a tweet that the government had received the IMF’s Memorandum of Economic and Financial Policies (MEFP) containing economic and fiscal targets under the seventh and eighth reviews of the program.

Significantly, having the two reviews completed at the same time raises the prospect of $1.9 billion being disbursed once the IMF board gives the all clear to resume the bailout program.

“I got a message from the finance minister early morning that we could get $2 billion from the IMF instead of $1 billion,” Prime Minister Sharif said while addressing an economic seminar in Islamabad on Tuesday.

Once the IMF clears the next tranche, it should open up other external finance avenues for Pakistan to shore up its reserves. – Rappler.com