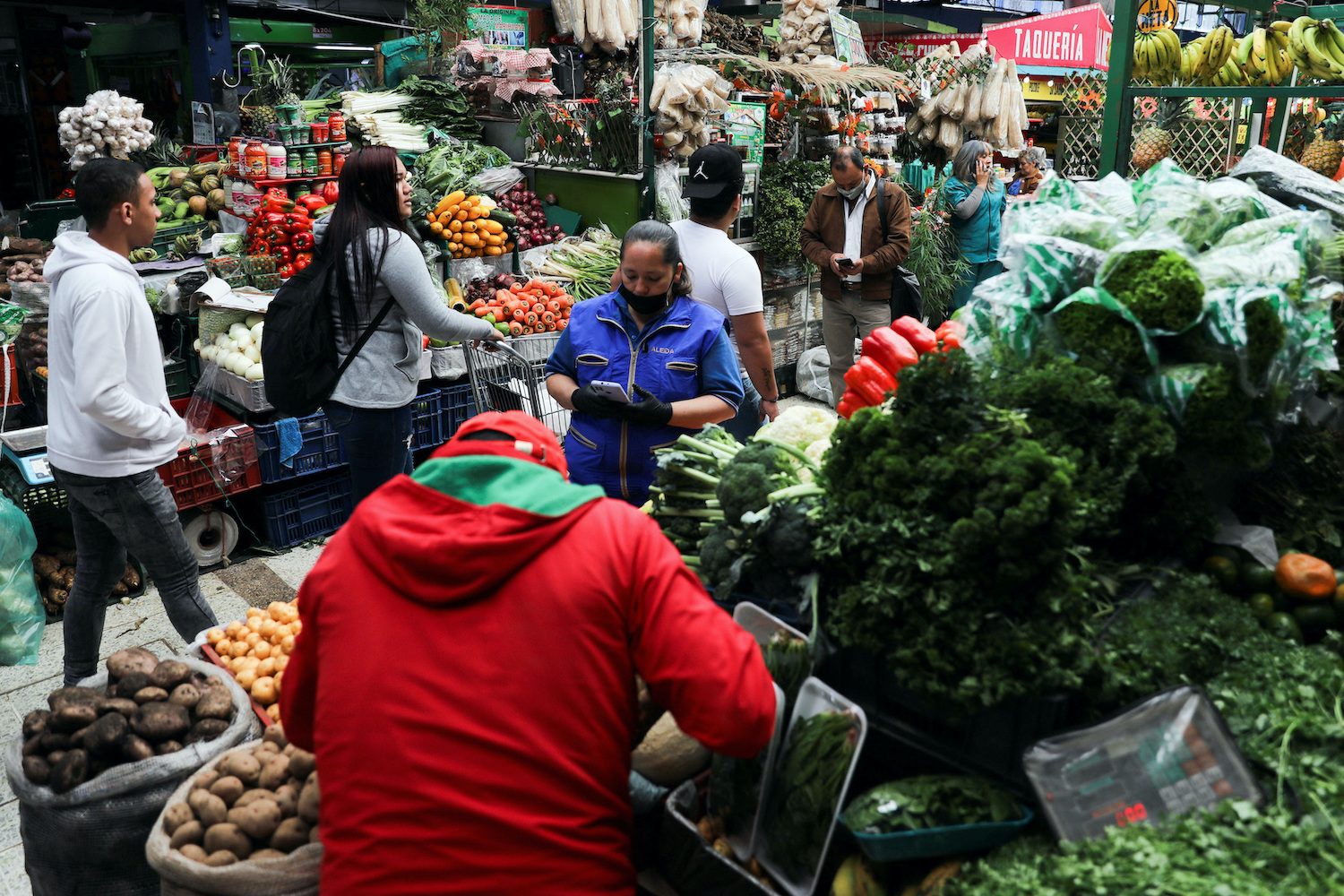 INFLATION. People walk through the Paloquemao market square, amid inflation reaching the highest figures in years, in Bogota, Colombia, October 7, 2022.

The International Monetary Fund (IMF) warned on Tuesday, October 11, of a disorderly repricing in markets, saying global financial stability risks have increased, raising the risks of contagion and spillovers of stress between markets.

The IMF said that “storm clouds” are looming over the global economy, including persistent inflation, a slowdown in China, and ongoing stresses from Russia’s invasion of Ukraine which have driven up the risk of a severe downturn to levels not seen since the onset of the COVID-19 pandemic.

“It’s difficult to think of a time where uncertainty was so high,” said Tobias Adrian, director of the IMF’s Monetary and Capital Markets Department. “We have to go back decades to see so much conflict in the world, and at the same time inflation is extremely high.”

The combination of high inflation with central bank policy uncertainty “creates this environment of really high risk and volatility,” he said.

“When risk is high, correlations are high,” Adrian said. “So spillovers and contagion [are] at a higher level in these times of high uncertainty.”

In its latest Global Financial Stability Report, the IMF warned that global financial stability risks had increased since the April 2022 edition, leaving the balance of risks “significantly skewed” to the downside.

“The global environment is fragile with storm clouds on the horizon,” the report stated.

Lingering market vulnerabilities, tightening liquidity, stubborn inflation, and ongoing efforts by central banks worldwide to raise rates to combat it have combined to create a volatile and risky environment, the report stated.

“With investors aggressively pulling back from risk-taking recently as they reassess their economic and policy outlook, there is a danger of a disorderly repricing of risk,” the report stated. “In particular, volatility and a sudden tightening in financial conditions could interact with, and be amplified by, preexisting financial vulnerabilities.”

Markets have had a brutal year with the S&P 500 down 24% so far this year while global bonds entered a bear market and the dollar is around a two-decade high – causing problems for the rest of the world.

In particular, the IMF warned that any sharp downturn would be acutely felt by emerging market economies, where they are grappling with a “multitude of risks” like high borrowing costs, high inflation, and volatile commodity markets. The IMF also cautioned that credit spreads have widened substantially in the corporate sector, and higher rates could adversely impact housing markets.

In China, the property sector downturn has already deepened, and failures of property developers could spill over into the banking sector, the IMF cautioned.

While banks in advanced economies seem to have sufficient capital and liquidity, the IMF noted that in its global bank stress test, up to 29% of emerging market banks would breach their capital requirements in a severe global recession, leading to a capital shortfall of over $200 billion. US banks will report third-quarter earnings starting this week and are expected to show weaker profits.

“It’s certainly possible that in an adverse scenario there could be stress on individual institutions,” said the IMF’s Adrian. “Even in the bank stress test that uses a globally consistent scenario, we find banks are broadly safe but it doesn’t mean every bank is resilient under every scenario.”

Credit Suisse has been the center of global attention as speculation about the bank’s future gathered pace on social media earlier this month amid anticipation it may need to raise billions of francs in fresh capital, sending its stock and some bonds to new lows.

Other specific markets to watch were dollar funding markets where Adrian said there was a widening in cross-currency basis swaps.

“We are just under three months prior to the year end and typically around the year end there’s a bit of balance sheet stress as some trades are taken off or reshuffled, but the magnitude of the [moves] is quite unusual,” said Adrian. “There are dollar funding shortages.”

He also said there was a risk of a “dash for cash” in the event of a common global shock.

“I wouldn’t exclude that there couldn’t be another dash for cash – meaning [US] Treasury yields suddenly increasing in a time when there’s a flight to quality. Usually in a flight to quality people buy Treasuries, but there could be a sharp sell-off of duration at some point. When it’s disorderly, that’s when you see the stress.” – Rappler.com