In isolated Russia, a tale of two economies 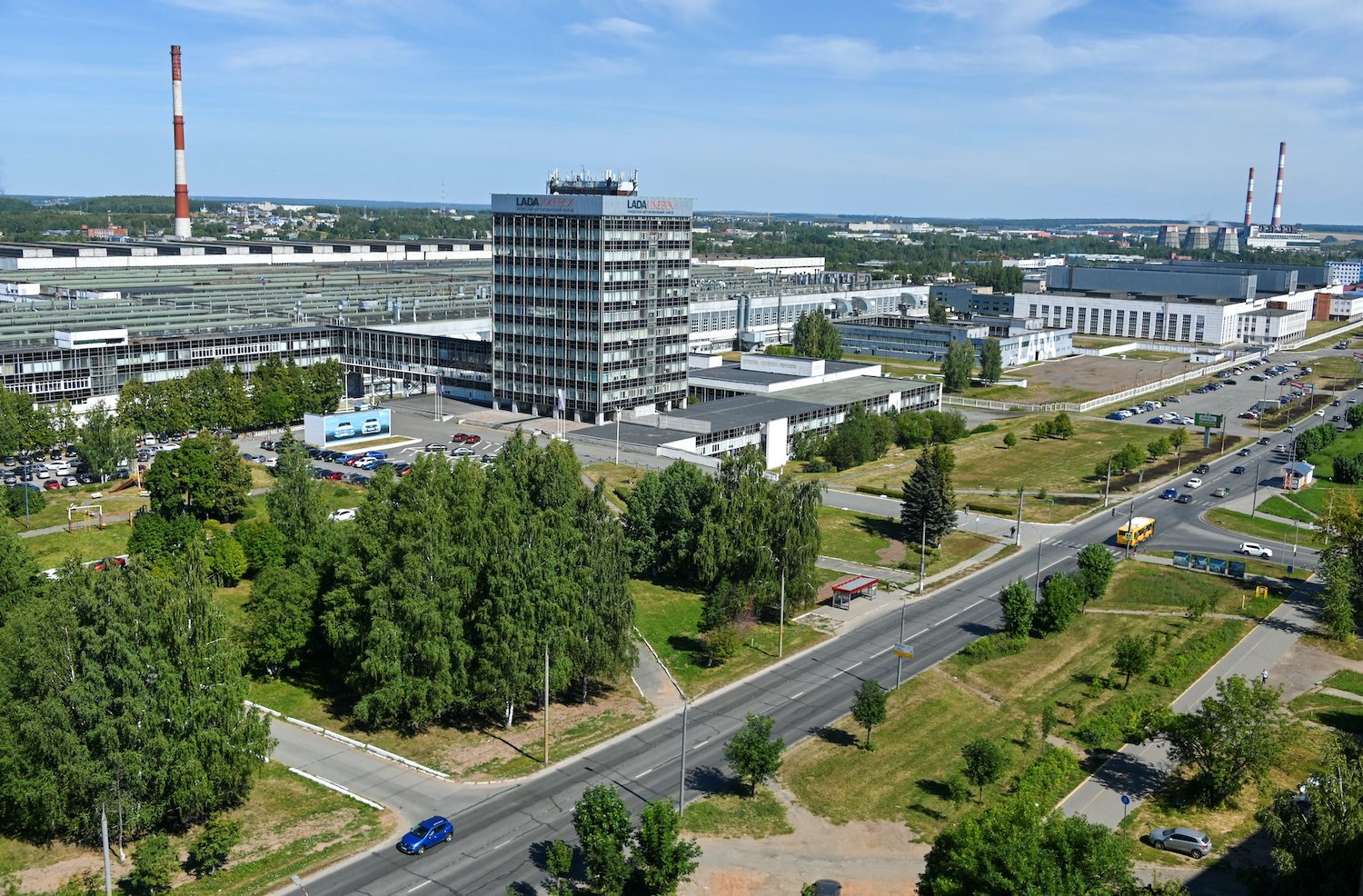 AVTOVAZ. A general view of the Lada Izhevsk automobile manufacturing plant, which is part of Russian car manufacturer Avtovaz, in the city of Izhevsk, Russia, August 19, 2022.

IZHEVSK, Russia – Russia’s record employment signals a surprisingly smooth decoupling from the West. Its rapid replacement of McDonald’s and Starbucks says business as usual. Yet pressures are building inside its economic machine.

Six months into the Ukraine conflict, the strategies and struggles of Russia’s biggest automaker offer an insight into the contrasting fortunes of a country striving to withstand what Vladimir Putin calls an economic “blitzkrieg” by the West.

Avtovaz restarted production of its Lada brand this summer after it was halted in March in the face of Western sanctions, supply shortages, and the loss of its French partner Renault. It has not formally laid off any of its 42,000 workers.

Nonetheless, the company’s feeling the heat, and it’s shrinking.

The bulk of the 3,200 workers at its factory in the industrial city of Izhevsk – where car production has not resumed – have been furloughed since March, with the company paying two-thirds of their wages, although some staff have been given temporary work around the factory on reduced hours.

This month, the automaker offered all Izhevsk workers one-off payments to quit as it looks to focus more production on its primary plant in Togliatti, 600 kilometers away.

“It’s a choice between bad and terrible,” said Alexander Knyazev, referring to the dilemma over whether to take a 200,000 rouble ($3,400) severance payment or stay in his job in Izhevsk’s stamped body parts workshop.

Last week, he chose to walk away from the factory, which had paid him over 45,000 roubles per month.

“They don’t need so many technicians anymore.”

Asked how many workers had chosen to accept the severance, Avtovaz told Reuters it would disclose the final number after this month, adding that those workers on reduced hours would go back to a five-day week at the plant from Monday, August 29.

The company did not elaborate on its plans for Izhevsk, though it said earlier this month it remained committed to the plant, which it said would be retooled to make the first Russian-made electric car, the Lada e-Largus, and would retain service and support functions.

“In the current situation of sanctions pressure and a growing number of variables, we are taking comprehensive measures to maintain employment,” Avtovaz president Maxim Sokolov said at the time.

Ruben Enikolopov, a professor of economics at Moscow’s New Economic School, said the auto sector’s struggles were being masked by “hidden unemployment,” where workers were not laid off but instead placed on indefinite furlough.

He said he expected unemployment to rise towards the end of the year, when he said it would likely become clear that sanctions were unlikely to be lifted in the near future.

“In Russia, economic crises don’t tend to produce mass unemployment because of the specifics of the Russian labor market like the furlough practice,” Enikolopov said.

The Russian economy ministry declined to comment for this article. This month, Economy Minister Maxim Reshetnikov dismissed any talk of a dramatic rise in joblessness, which official data pegged at a record low of 3.9% in June.

“I think that in autumn, we will move away from these record low numbers but let’s not overdramatize, the situation is under control,” he told a conference in Yekaterinburg.

In another sign of official optimism, amid high oil prices and popular policies to cushion the impact of inflation, latest government forecasts indicate the depth of Russia’s economic contraction will be less severe than previously feared this year.

Autos is not the only Russian industry taking a hit from the showdown with the West.

In total, 236,000 Russian workers were either on furlough or reduced hours as of the end of July, according to Deputy Prime Minister Tatiana Golikova. They are not part of officially 3 million people registered as unemployed in Russia.

About half of all air traffic controllers, or 14,000 people, have been furloughed or put on part-time work, for example. Several foreign companies leaving Russia, from Swedish furniture giant IKEA to Spanish fashion chain Zara, have also furloughed staff.

Yet the auto sector has suffered more than most, with passenger car output dropping 62% in the first half of the year versus the same stretch in 2021, according to the state statistics agency.

Global carmakers, including Volkswagen, Nissan, Hyundai, Stellantis, Mitsubishi, and Volvo, suspended their Russian operations and furloughed workers on the statutory two-thirds pay after Moscow launched its military campaign in Ukraine on February 24.

That foreign exodus put more than 14,000 Russian auto workers on leave, according to a Reuters review of the industry.

The future of many of these workers is looking precarious as the conflict continues, a steep reversal for an industry that’s been a symbol of Russian success for decades, attracting foreign players and becoming one of the country’s largest employers.

An auto slump could have far-reaching economic consequences; the industry employed around 400,000 people in 2020, with around 10 times as many workers depending indirectly on the sector, according to government data.

Avtovaz has sought to adapt since Western sanctions severed Russia from many global supply chains and export markets, launching a series of simplified models with fewer hard-to-source foreign components.

In June, the company began production of a new, stripped-down Lada Granta, which comes without features such as remote keyless control or air-conditioning, which rely on imported components.

Nevertheless, sales volumes have fallen by 63% in the first seven months of the year, to 85,000 vehicles, with production of the Lada Vesta, Lada X-Ray, and Lada Largus models halted altogether, according to Avtovaz data.

In some places such as Izhevsk, other sectors may be picking up the slack.

Knyazev, who quit Avtovaz in Izhevsk, hopes to get a job at gunmaker Kalashnikov’s factory in the city, the capital of the Udmurtia region, about 1,300 kilometers east of Moscow. Though even then, he said, he would likely be paid a lower wage than at the carmaker.

More than 100 former Avtovaz employees have already been hired by Kalashnikov, according to Tatyana Churakova, deputy prime minister of Udmurtia.

“We are working to do everything possible to arrange for all the employees who may leave the car plant to transfer to our other plants,” Churakova told Reuters.

‘No one knows anything’

Despite such efforts, half a year after Russia launched its “special military operation,” many people in this industrial city are contemplating an uncertain economic future.

Sergei, 58, a manager at the Avtovaz Izhevsk plant who declined to provide his last name, said he himself had decided not to take the severance payment.

“They don’t kick anyone out, whoever wants to stay stays. Many do want to stay,” he said at the factory’s exit gate. “No one knows anything at the moment. No big decisions have been made yet. Everyone is waiting.”

Avtovaz has said it plans to restart production of the Lada Vesta – halted at Izhevsk – at its main assembly plant in Togliatti in spring next year. It did not specify how it plans to secure supplies of parts currently unavailable from abroad due to the sanctions. – Rappler.com