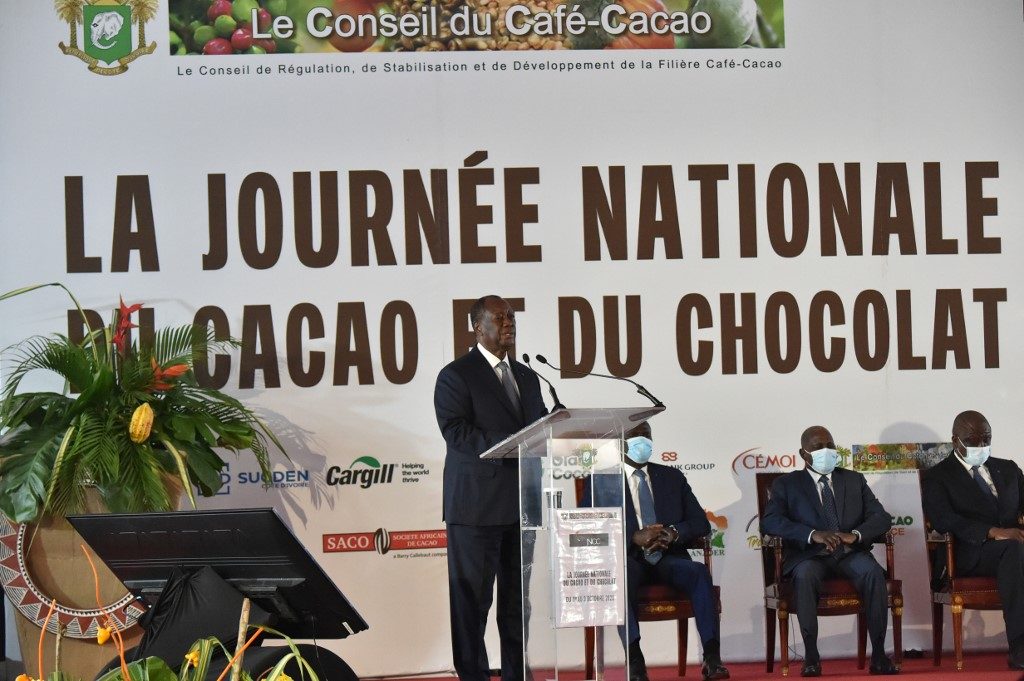 Ivorian President Alassane Ouattara (L) speaks during the National Cocoa and Chocolate Day in Yamoussoukro on October 1, 2020, where he announced the new purchase price of cocoa from farmers. - Ivory Coast, the world's biggest cacao exporter, said on October 1, 2020, it would hike the guaranteed minimum price for farmers by 21 percent for the 2020-2021 growing season. The announcement was made by President Alassane Ouattara at the start of an annual trade fair for the cacao industry, the West African country's biggest economic sector. (Photo by SIA KAMBOU / AFP)

Ivory Coast, the world’s biggest cacao exporter, said on Thursday, October 1, it would hike the guaranteed minimum price for farmers by 21% for the 2020-2021 growing season.

The announcement was made by President Alassane Ouattara at the start of an annual trade fair for the cacao industry, the West African country’s biggest economic sector.

The price floor is set once a year.

The announcement comes in the run-up to a presidential election on October 31 in which Ouattara, 78, is controversially seeking a 3rd term in office.

Critics accuse him of trying to get around the country’s two-term presidential limit by tweaking the constitution in order to reset his number to zero.

Around 15 people were killed in clashes in August, and the opposition has called on the public to carry out “civil disobedience.”

Ivory Coast produces more than 40% of the world’s cacao – the raw ingredient for chocolate, grown from cocoa beans.

The 2020-2021 harvest in Ivory Coast is likely to be the same as in 2019-2020, at around 2.1 million tons, according to the International Cocoa Organisation, an estimate that depends on political calm.

Cacao accounts for between 10% and 15% of the country’s gross domestic product and nearly 40% of its export revenue, according to the World Bank.

At least 5 million people, or about a fifth of the population, depend on the sector for work.

The figure of 1,000 CFA per kilo is the same as that announced last week by neighboring Ghana, which accounts for around 20% of global cacao output.

The two countries have been working together since last year to try to shore up prices on the world market.

They have introduced a “living income differential,” or LID – a premium aimed at combating poverty among farmers – that is negotiated with cocoa and chocolate multinationals.

“If Ghana and Cote d’Ivoire can stick together, [the] living income differential will be there forever,” said Joseph Boahen Aidoo, chief executive of the Ghana Cocoa Board, referring to Ivory Coast by its French name.

The increase to 1,000 francs brings Ivory Coast’s guaranteed minimum price to 2015 levels, which then rose to 1,100 francs in 2016 before collapsing.

But some farmers told Agence France-Presse that the hike still fell far short of what was needed.

“It’s just enough to survive. We would have preferred 1,200 francs,” said N’Dri Kouao.

“It’s progress, but it’s not enough to live on. We need 1,400 or 1,500 francs to cope,” said Moussa Kone, president of the National Agricultural Union for Progress in Ivory Coast.

The ceremony in Yamoussoukro was virtually a campaign event for Ouattara, whose reelection bid is styled on claims of stability and economic revival.

Ouattara told the farmers the increase would bring state support for the cacao sector to 355 billion francs – $630 million – annually.

“You can count on me,” the president said.

His agriculture minister, Kobenan Kouassi Adjoumani, told the audience, “Go everywhere into your villages and announce the good news of President Ouattara’s candidacy…. The president has done a lot for you, in return, you have a duty of acknowledging him.”

The remarks drew a mixture of laughter and applause.

Ouattara won 2010’s election, but the result was rejected by then-president Laurent Gbagbo.

A brief civil war erupted, claiming around 3,000 lives, before Ouattara ousted Gbagbo, who was then put on trial at the International Criminal Court in The Hague.

Gbagbo has since been acquitted and remains in Brussels pending the outcome of an appeal against that verdict.

But he remains a powerful figure back in a country still traumatized by the violence. – Rappler.com