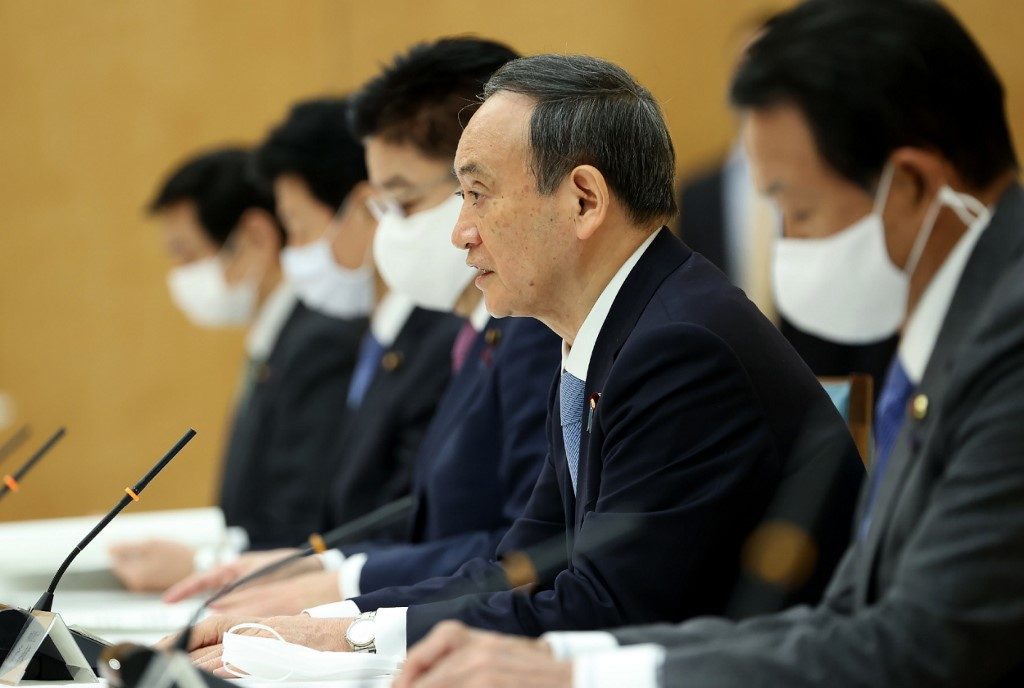 STIMULUS PACKAGE. Japanese Prime Minister Yoshihide Suga (2nd R) speaks at a meeting in his office in Tokyo on December 8, 2020.

Japan‘s government on Tuesday, December 8, approved more than $700 billion in fresh stimulus to fund projects from anti-coronavirus measures to green tech, the country’s 3rd such package this financial year.

The COVID-19 pandemic has wrought global economic carnage and countries across the world have announced massive cash injections.

It is the first stimulus spending Prime Minister Yoshihide Suga has announced since taking office in September, and comes as Japan faces a spike in COVID-19 infections, with record numbers of new cases reported in recent weeks.

“We drew up [the stimulus package] to pave the way for new growth, to protect people’s livelihoods as well as maintaining employment and keeping businesses going,” Suga said.

Japan officially exited recession last month after 3 quarters of contraction, and hopes to cement its recovery with the latest spending – which follows 2 previous packages this year each worth around 117 trillion yen.

The new package includes financial support for medical institutions and facilities for the elderly, and subsidies to continue a controversial domestic travel scheme supporting tourism-dependent businesses.

While Japan has seen a relatively small coronavirus outbreak overall – with 163,929 confirmed cases and 2,382 deaths – there has been a sharp rise in infections, and doctors have warned that hospitals could be overwhelmed.

On Tuesday, the defense minister also ordered military nurses to be sent to a city in the northern Hokkaido region that is facing a severe shortage of medical staff.

In October, Suga set a 2050 deadline for Japan to become carbon neutral, significantly firming up the country’s climate change commitments.

Yasutoshi Nishimura, the minister in charge of fiscal policy, said the government aims to return the economy to pre-pandemic levels within the next financial year.

“It is all the more important to put [the economy] on a growth path by strengthening new fields such as green and digital,” he said.

It forecast the country’s economy will rebound by 3.7% in 2021 and to get back to pre-virus levels by the 3rd quarter next year – “sooner than the US and much sooner than the eurozone.” – Rappler.com