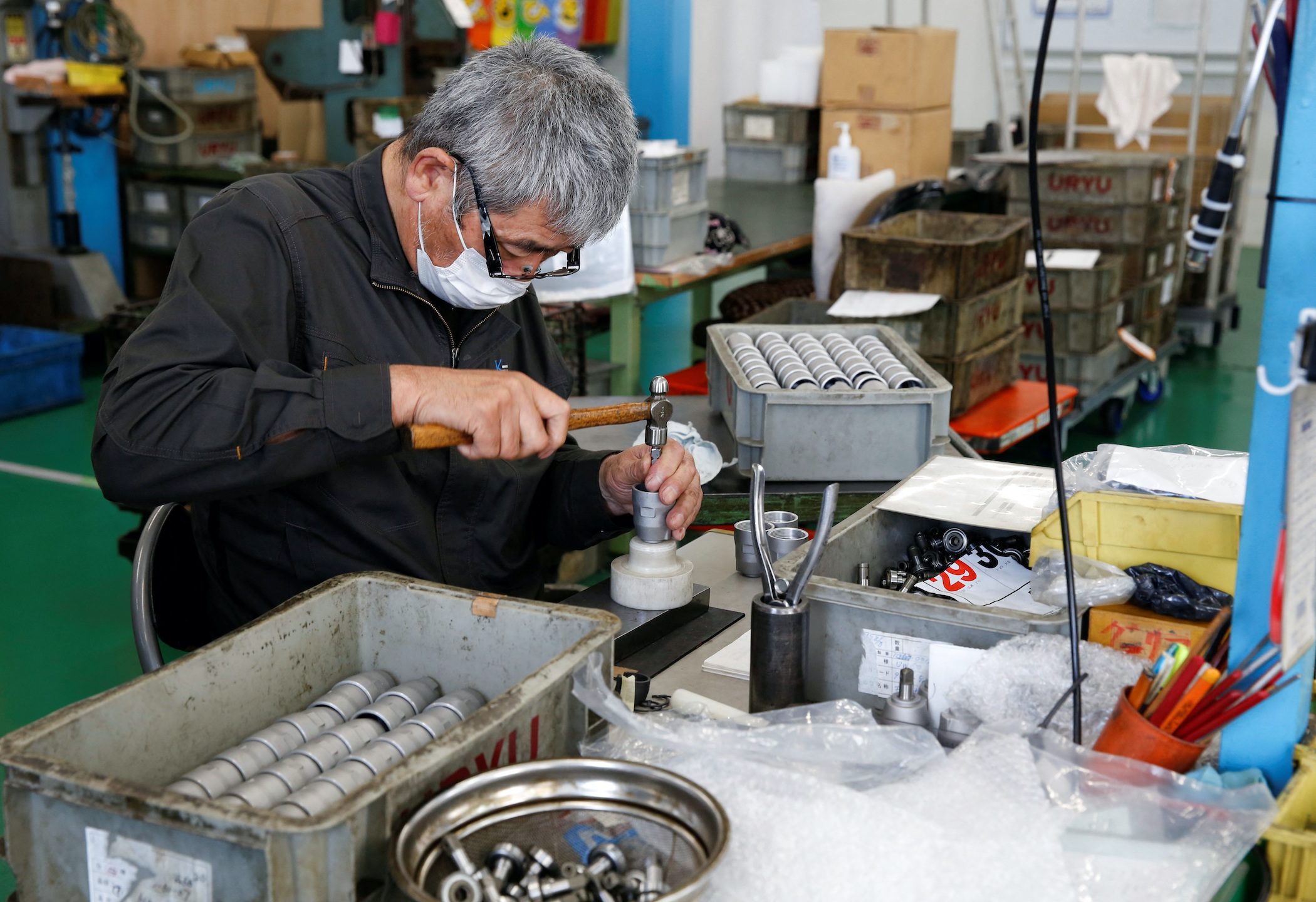 ASSEMBLY. A worker assembles an air drill at the factory of manufacturer Katsui Kogyo in Higashiosaka, Japan, June 23, 2022.

HIGASHIOSAKA, Japan – The small factories in the western Japanese city of Higashiosaka for decades fueled the thundering rise of the country’s biggest brands – but a weak yen and rising costs have accelerated a slow decline, and are reshaping the industrial heartland.

Home to about 6,000 firms, 87% of which have fewer than 20 employees, the city is emblematic of how such forces are pushing Japan’s small manufacturers toward a tipping point.

The workshops in Higashiosaka create metal components for everything from train seats to ballpoint pens, and have long relied on powerhouses such as Sharp, Panasonic, and Sanyo for orders.

Now Sanyo is gone, acquired by Panasonic. Work in general has dried up in recent years in the face of competition with South Korea and China; when Taiwan’s Foxconn acquired Sharp in 2016, it moved much of the company’s manufacturing out of Japan.

The amalgam of issues that Higashiosaka faces – an aging population, offshoring, and a sagging currency – mirrors the problems that have been chewing at the foundation of the world’s third largest economy and its global exports, which hit 83.1 trillion yen ($610.54 billion) last year.

One factory in the city, aircraft component manufacturer Aoki, is pivoting to the food industry after being hit hard by the pandemic. Another, air drill parts maker Katsui Kogyo, raised prices for the first time since it started business in 1967. Lampshade company Seiko SCM scaled back its production and is seeking to revive Higashiosaka’s manufacturing industry by converting part of its headquarters to shared working space.

“It’s like being the frog being slowly boiled alive,” said Hiroko Kusaba, chief executive officer of Seiko SCM. “We all believed that the big brands would always protect us, but that’s just not the case anymore.”

In the past six months, the value of the Japanese yen has plummeted from about 115 yen to the dollar in early March to more than 130 yen in August. Although a weak currency boosts export profits, past a certain point it makes materials cost so much they wipe out that benefit.

The pain of COVID-19 lingers as well: 67% of the small firms in Higashiosaka say they are still hurting from the pandemic, according to a survey conducted in April by the local chamber of commerce.

For these companies, weathering the economic storm isn’t just about surviving, but preserving the industrial ecosystem.

Small- and medium-sized enterprises account for 99.7% of companies and 68.8% of employment in Japan. But these same companies represent only 52.9% of the economy, according to a 2016 government survey, the most recent data available.

The region around Higashiosaka has a history as a manufacturing hub dating back hundreds of years. The city still has industrial enclaves where tiny factories are wedged between houses, hammering, sawing, and shaping metal from early morning to dusk.

That mishmash of production has given rise to human connections and a sense of community, said Hirotomi Kojima, CEO of Katsui Kogyo, the air drill company. That provides a crucial support network, but also makes it difficult to pass along higher costs.

Kojima raised prices in October. Materials costs have soared since then, but he is hesitant to raise prices again, worried that he may lose longtime customers.

They have asked favors of Kojima, such as splitting costs or “going easy” on price increases.

“The closer I am to the customer, the harder it is to start that conversation,” Kojima said.

Torn between protecting those ties or hurting his business, Kojima is seeking new clients for the first time in his 10 years as CEO.

He often visits with Hironobu Yabumoto, a close friend who manages another air drill manufacturer. Although they are in direct competition, they pass each other orders and share clients.

“We want the manufacturing industry and this culture to stay,” and that is a bigger priority than being the last one standing, Yabumoto said.

In the past decade or so, both Kusaba and Kojima have seen at least one factory quietly close every year as aging owners die, fall ill, or shut down their heirless businesses.

The surviving companies are close-knit. Kusaba, who is not from the city, said the locals – such as the baker and rice seller – anchor her to the community.

“And they come to me saying how business is down, how they had so many customers before when the manufacturing industry was thriving, and how times have changed so much,” said Kusaba, who has been CEO of Seiko SCM for 12 years.

That is why she is turning her own business on its head to protect her bottom line and help manufacturers in Higashiosaka.

In June, she reduced the die-cast department of her company to three people from six and decreased the amount of machinery. In its place, she is creating a coworking office space and opening a “shared factory,” where users can pay for access to machines and resources that will cut fixed costs and increase production.

“The big brands, the big manufacturers – they’ve forsaken us,” Kusaba said. “Now, we need to communicate with the consumer directly. We only have ourselves to rely on.”

Her decision means there will be more die-cast work for her competitors, but Kusaba said she would rather do that than watch the entire industry fall into ruin.

“Competition isn’t the way to survival. We have to join forces instead,” she said.

Aoki, which was labeled “non-essential” during the pandemic, is trying to avoid being dragged down by an airline industry wrecked by COVID-19. CEO Osamu Aoki has pegged his hopes on a different arena: food manufacturing.

He is designing and building a machine that processes meat. For now, it sits in the Aoki factory as workers fine-tune the device.

Although he predicts the food industry will provide more stability, Aoki is expecting his electricity bills to double in August – an 8-million-yen increase that will require a 4% jump in revenue to cover.

Japan’s manufacturing has traditionally been dependent on selling value-added products, in which a weak yen boosts profits. But that no longer seems true, Aoki said.

“I think it’s a reckoning,” he said of the sagging currency. “It’s now the time to reevaluate.”

The changes and experiments in Higashiosaka do not guarantee its survival, or that of Japan’s small-business culture.

“We won’t see a total wipeout if the factories can pass through the extra costs…but the longer [high prices] drag on, the harder it will be on them,” says Naohito Umezaki of the Higashiosaka Chamber of Commerce.

He added that the city’s social fabric was already fraying as family-owned companies shut down for good; a top priority is finding people to take over and preserve the manufacturing tradition.

At Aoki, 22-year-old Yuto Miyoshi sought advice from the CEO about whether to succeed his father in running the family welding business in a neighboring city.

“My father is often warning me of the hardships of running a business,” Miyoshi told Aoki.

But he added that on one rare occasion his father had a bit too much to drink, and let slip what a succession plan would mean to him.

“He said: ‘I would be so happy if you took over,'” Miyoshi said. – Rappler.com