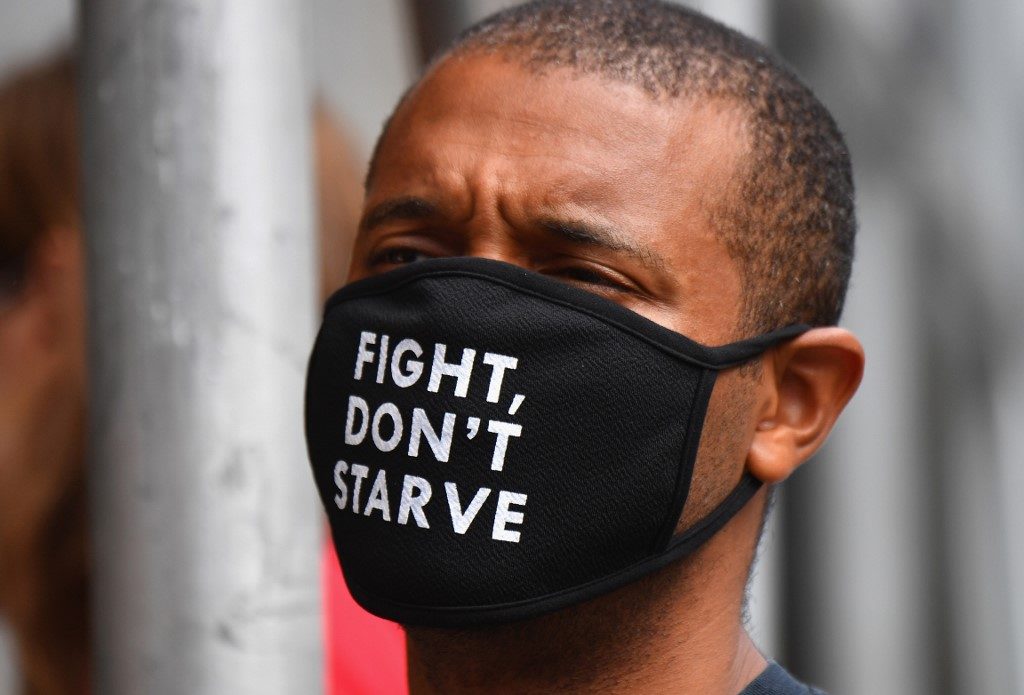 Protesters demonstrate during a 'No Evictions, No Police' national day of action against law enforcement who forcibly remove people from homes, in New York City on September 1, 2020. - The US economy added 1.4 million jobs in August and the unemployment rate fell to 8.4 percent, the Labor Department said on September 4, 2020, a sign of the continuing recovery from the coronavirus pandemic. (Photo by Angela Weiss / AFP)

Facebook Twitter Copy URL
Copied
United States Federal Reserve Chair Jerome Powell highlights the plight of families who may lose their homes, saying they shouldn't have to move out or be evicted

“Without question, this event has exacerbated really preexisting disparities in our economy that were already troubling,” Powell said in an interview with National Public Radio.

He said help should be given to people who have lost their livelihoods due to COVID-19 through no fault of their own – comments that come amid an impasse in Washington over a new aid package to offset the economic damage from the virus.

“The burdens of the pandemic have fallen to a greater extent on people at the low end of the income spectrum,” Powell said, especially low-wage employees who rent and have little savings, who are “very vulnerable to an extended period of unemployment.”

“I think it really does behoove us as a country, as a very wealthy country, to use our great powers to support people who did nothing wrong,” he said.

The Fed chair specifically raised concerns about families facing the loss of their homes, telling the broadcaster, “We shouldn’t let those people lose everything they have and have to move out or be evicted.”

“It could have significant macroeconomic effects over time. But it’s also just the right thing to do.”

However, there were indications of weakness in the monthly report, particularly given the rising share of people being permanently laid off, as well as the large numbers of job gains from temporary hiring to staff the US census count.

Powell said the report showed “significant improvement” in the hiring situation and was not necessarily indicative of a slowing recovery, and he remained optimistic the economy would bounce back.

The Fed cut its benchmark lending rate to zero and rolled out trillions of dollars in liquidity as the pandemic arrived. Last month, it announced a new policy framework that would keep interest rates lower for longer in an effort to maximize employment. – Rappler.com