Facebook Twitter Copy URL
Copied
(1st UPDATE) Despite having a budget of P1.2 billion for service contracting in 2023, the Department of Transportation says it is unlikely to extend the Libreng Sakay program next year

MANILA, Philippines – Free rides for the EDSA Busway (EDSA Carousel) under the Libreng Sakay program are set to end on December 31, with the government announcing plans to privatize the busway in 2023. 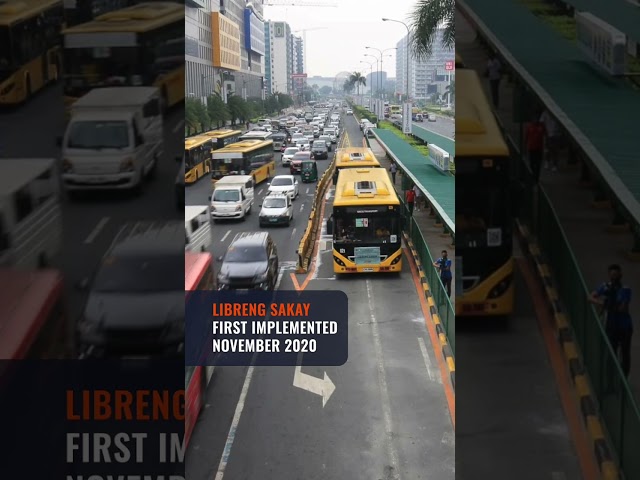 Starting 5 am on January 1, 2023, commuters will no longer enjoy free rides as fares will resume for the EDSA Carousel route, which runs from Parañaque Integrated Terminal Exchange (PITX) to Monumento.

The Libreng Sakay program was first implemented in November 2020 under the Bayanihan to Recover as One Act and was approved for extension until December 31, 2022, by President Ferdinand Marcos Jr. The program contracted 87 operators and 751 public utility buses to offer the public free rides. During the month of December, the program also offered free EDSA Carousel rides 24/7.

The EDSA Carousel has served at least 80,832,186 total passengers, according to a report by the Land Transportation Franchising and Regulatory Board (LTFRB) on Tuesday, December 27. The DOTr reported an average of 389,579 passengers riding the EDSA Carousel buses daily.

Despite the looming termination of the Libreng Sakay program, the EDSA Carousel route continues to expand as additional bus stops are added.

The DOTr opened a new bus stop in Tramo, Pasay City on Wednesday, December 28. The DOTr also plans to add three more stops for the route in 2023, according to a report on GMA News’ Unang Balita. The stops include one between North Avenue and Quezon Avenue in Quezon City, one in Ormoc Road in Quezon City, and one in Magallanes in Makati.

Bautista said that the government is hoping to privatize the EDSA Carousel by the 3rd quarter of 2023, according to a report by CNN Philippines.

He said that private sector groups have already shown interest in bidding for the privatization of the busway, but no proposals have been formally made yet.

In September, the DOTr announced that it was conducting a project study to assess the privatization of the busway. Given that the study could span up to 12 months, the Management Association of the Philippines (MAP) believed the move could spoil investment interest from private sector companies.

In its study, the department found that the EDSA Carousel performed poorly compared to busways in other countries, scoring below 25% of their standards.

Groups from the private sector continued to urge the government to immediately implement the privatization of the busway.

On October 10, at least 30 private groups issued a joint statement in support of the EDSA Carousel’s privatization “to ease commuters’ daily grind.” The groups include MAP, Financial Executives Institute of the Philippines (FINEX), Foundation for Economic Freedom (FEF), and the American Chamber of Commerce of the Philippines (AMCHAM).

The groups pointed out that the busway already transports a high number of passengers daily despite only operating with 550 buses – a limited number compared to the pre-pandemic level of 3,300 buses. The busway also cut the end-to-end travel time in EDSA by half, from three hours to only one and a half hours.

“It is high time that the government and the private sector join hands to provide the critical components that are needed to complete the Busway System,” the statement read.

“The busway with rapid bus service has proven to be the most cost-effective urban mass transit system in the world. It is easy to implement and requires significantly less capital expenditures, while it can provide high efficiency and ridership capacity similar to rail trains with the introduction of the latest technology in commuter transport: high capacity, articulated trackless long bus-trains running on rubber wheels.”

In building a privatized EDSA Carousel, the groups highlighted the Jakarta Busway, which is the longest system in the world, and the Guangzhou System as standards to aspire to. – Rappler.com