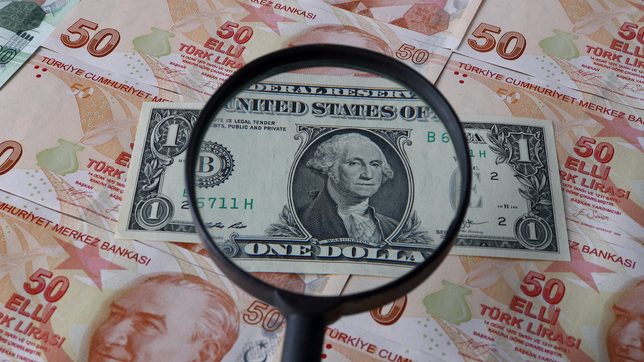 LIRA. A $1 banknote is seen through a magnifying lens on top of Turkish lira banknotes in this illustration taken in Istanbul, Turkey, November 23, 2021.

Facebook Twitter Copy URL
Copied
Suppliers of medical equipment in Turkey have long complained about delays in payment, which hit them hard because they are paid in lira according to the exchange rate at the date of contract

ISTANBUL, Turkey – Turkey‘s medical equipment suppliers have seen the value of their unpaid government bills soar 50% in the last three months to 9 billion lira ($658 million) and the lira meltdown is piling further pressure on the import-reliant sector, its chief said.

Spending on medical equipment, most of which is sourced from abroad, has risen sharply in Turkey in recent years due to the chronic weakness in the lira. Expenditure has been further stretched by the coronavirus pandemic.

Suppliers have long complained about delays in payment, which hit them hard because they are paid in lira according to the exchange rate at the date of contract.

“We have unpaid bills from hospitals dating back to January 2020, when the foreign exchange rate was six. And you see what the rate is now,” said Metin Demir, head of the Health Industry Employers’ Association.

“Firms are running out of capital. If we can’t get a payment urgently, we’ll probably see company closures among the industry,” Demir said, adding that medical equipment suppliers relied on imports for 85% of their stock.

Turkey’s health ministry did not immediately respond to a request for comment. Demir said that even if medical equipment suppliers received all their delayed payments now, the loss in the lira would mean they could only replace half the stock they supplied.

The problem has escalated since September, when medical suppliers held a protest over the payment delays, Demir said.

The government previously proposed to pay off the debts at a discount, or with lengthy payback periods. Demir said earlier this year that most suppliers could not accept those terms.

Demir said a 50% increase in lira prices for many goods after the latest currency movement will pose a fresh challenge for companies which won public tenders just a few months ago. – Rappler.com