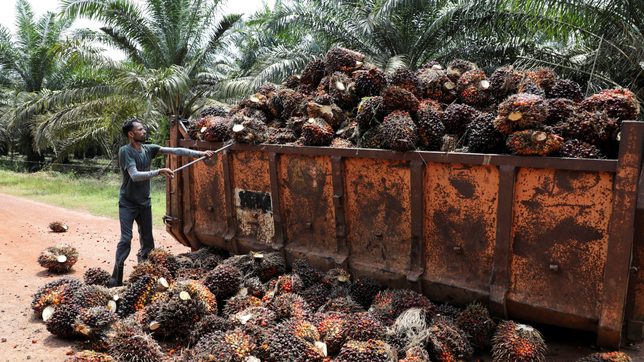 Facebook Twitter Copy URL
Copied
The most pressing problem for Malaysian palm oil producers such as FGV Holdings and Sime Darby Plantation is a lack of workers to harvest palm trees, a skilled and dangerous task

KUALA LUMPUR, Malaysia – Malaysia’s palm oil producers are racing to adjust to an acute shortage of workers due to the coronavirus and sharply higher costs of recruitment as they make changes in response to accusations of forced labor.

The country, second only to Indonesia in palm oil production, has become more competitive in recent months due to higher export levies imposed by its southern neighbor. But mounting employment costs mean Malaysia risks losing that edge and potentially ceding market share to Indonesia.

The increased costs, alongside record-high fertilizer prices affecting both countries, pushed the key commodity to an all-time high in October. That has already forced up the price of the foodstuff worldwide, and is raising the costs of cosmetics and detergents and other products that palm oil is used in. The most pressing problem for palm oil producers such as FGV Holdings and Sime Darby Plantation is a lack of workers to harvest palm trees, a skilled and dangerous task.

“The current issues are an extreme manifestation of the fact that as incomes grow and workers, with greater options of urban employment, become less able or willing to do manual labor, attracting them to the plantations will become more difficult,” said Julian McGill, head of Southeast Asia at LMC International. “Soon there will be no ‘cheap’ labor.”

Up until April last year as many as 337,000 migrant workers, mostly from Indonesia, worked on Malaysian plantations, making up about 80% of the workforce. Thousands of them flew home throughout the pandemic while Malaysia closed borders and stopped issuing new work permits to control the spread of the new coronavirus. Hundreds of undocumented workers were also deported.

As a result, Malaysia’s palm oil yields dropped to nearly 40-year lows this year as plantations operated with about 75,000 fewer workers than needed. The steep drop in production pushed palm oil prices to record highs and sparked concerns about food inflation.

To alleviate the situation, Malaysia in September approved the recruitment of 32,000 foreign workers for palm oil plantations, prioritizing those from Indonesia. Although even if that many were hired, it would still leave plantations well below full capacity for the next peak harvest season of September to November 2022.

Plantation owners are finding it harder and more expensive to hire workers as they try to repair Malaysia’s standing in global markets caused by accusations of using forced labor.

US Customs and Border Protection banned imports of palm oil in 2020 from Sime Darby and FGV on suspicion of using forced labor, including debt bondage, violence, and unlawful retention of identity documents. The bans are still in effect. Both companies have hired independent auditors to evaluate their operations and said they would engage with the CBP to address its concerns.

Similar accusations of forced labor have also been made by the CBP and rights groups against other industries in Malaysia, including rubber and electronics. In July, the US Department of State downgraded Malaysia to its labor watch list that includes China and North Korea.

“The risks of a failed or corrupt recruitment process to Malaysia’s government and industry reputation at this time, already reeling from US forced labor sanctions and a blackened image globally, are real,” labor rights activist Andy Hall told Reuters.

Hall, who has been at the forefront of campaigns to end labor abuse in Malaysia and elsewhere in Asia, was hired by Sime Darby in October 2020 as an ethical recruitment consultant.

To try to address the issues and repair its image overseas, plantations have invested millions of ringgit to improve recruitment processes, upgrade housing for workers, provide lockers for workers to keep their passports in, and hire auditors and consultants to assess their labor practices.

FGV and Sime Darby told Reuters they are strengthening due diligence processes to ensure they appoint only labor agencies that comply with their human rights policies. They said they have improved communication efforts to ensure workers fully understand the realities of plantation work.

“This is to further ensure that contracts are signed freely, without any coercion, intimidation, deception, or threats as well as to ensure that no unethical practices were involved in the recruitment process,” Sime Darby told Reuters.

Educating and preventing laborers making large payments to recruiters or other middlemen, which up to now has been common, is one of the key issues that needs to be addressed, according to Hall.

Some companies are considering repaying such recruitment fees to workers, a manager of a palm oil refinery told Reuters. Such a move helped Malaysian glove company Top Glove Corporation get an import ban lifted by the United States.

FGV said it has allocated an additional 43 million ringgit ($10 million) this year to refurbish workers’ housing and upgrade equipment to ensure continuous access to electricity and water in remote locations. Sime Darby told Reuters it estimates that it will spend 65 million ringgit annually for the next seven years on routine efforts to review and improve working conditions at its plantations.

Employers must pay all coronavirus-related fees like testing and quarantine, with no help from the Malaysian government. That could double recruitment costs for each worker to about 10,000 ringgit, according to estimates by the Malaysian Palm Oil Association (MPOA).

There is no guarantee that Malaysian plantations will be able to recruit the thousands of workers it needs. Indian labor agent Vimlesh Gautam told Reuters he is aiming to hire 3,000 workers from India to start by December, but has so far only identified around 200 candidates as coronavirus protocols in India and Malaysia complicate the recruitment process.

“We have to put the process on hold because we are awaiting medical guidance from Malaysia,” said Gautam. “Once it is confirmed we can get more workers.”

With most Malaysian plantations having been severely understaffed for two seasons, urgent clearing, weeding, and application of pesticides and fertilizers are needed to help palm production recover.

Thousands of tons of valuable fruit have been left to rot on the ground after plantations’ failed efforts to get local workers to do the taxing work of harvesting the heavy, perishable, and prickly fruit bunches at the prevailing wage rates. The need to spend money on such remedial work, just as fertilizer prices hit record highs, on top of the extra outlays on recruitment, will push up costs for Malaysian producers, making them less competitive against Indonesian rivals.

Cheaper labor has historically kept Malaysia’s average cost of palm oil production lower than Indonesia’s, whose cost has been in the $400- to $450-per-ton range. Malaysia’s cost has already increased to about $478 to $526 per ton this year, according to MPOA. Indonesia’s figure has also risen, to $500 to $600 per ton this year, mostly because of rising fertilizer prices, according to the Indonesian Palm Oil Association. But Malaysian producers such as FGV expect costs to continue to rise, threatening their advantage.

These mounting costs are spurring Malaysia’s palm producers to accelerate investments into genome research to create higher-yielding seeds, as well as automation and mechanization, even looking at drones to harvest the fruit.

Plantation owners hope such investments will make them less reliant on human labor, but new technology will take years to implement.

“In the short term, there is nothing companies can do but to convince the government to give them more workers and improve on the process,” said Ivy Ng, regional head of plantations research at CGS-CIMB Research. – Rappler.com