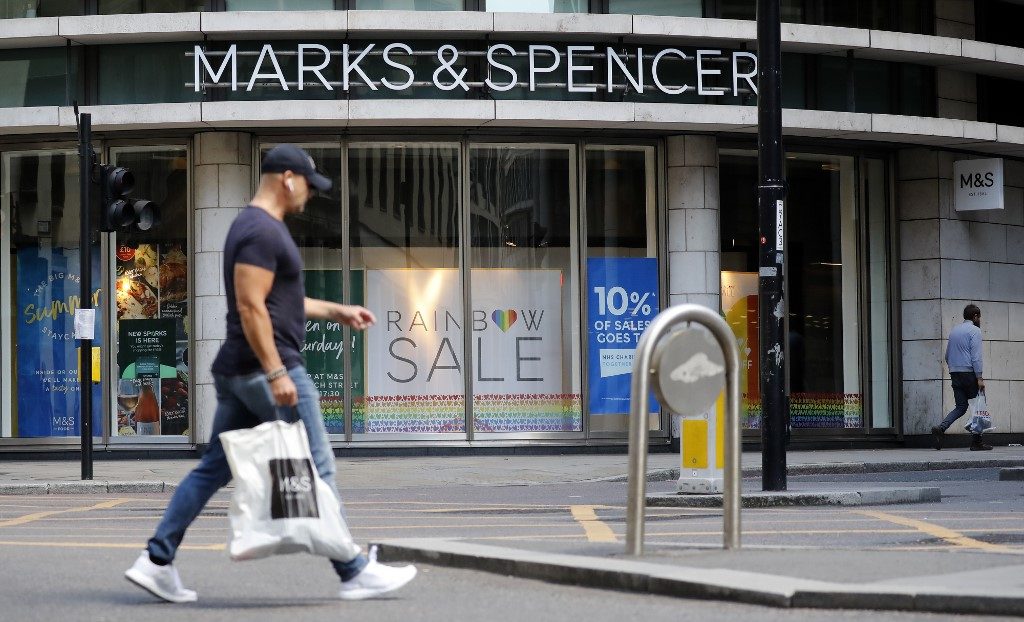 In this file photo taken on July 20, 2020, pedestrians walk past a Marks & Spencer store in London. - Marks and Spencer, the British retail chain selling clothing and food, is to cut around 7,000 jobs as the coronavirus pandemic keeps shoppers away from its stores, it announced on August 18, 2020. (Photo by Tolga AKMEN / AFP)

Marks & Spencer, the British food and clothes retailer, said on Tuesday, August 18, it will cut around 7,000 jobs as the coronavirus pandemic increasingly pushes customers to shop online.

The job cuts, to be implemented over the next 3 months, include losses from its central support center, in regional management, and across its United Kingdom stores, the group said in a statement.

Marks & Spencer employs more than 80,000 staff, of whom the vast majority work in the UK, where its decades-long cherished status among shoppers has diminished in recent years amid fierce online competition.

Alongside the losses, Marks & Spencer “expects to create a number” of positions to help meet a surge in online demand for its products.

While total group sales slumped by around one-fifth in the 19 weeks to August 8 – which included most of the period Britain was in lockdown – online revenue surged nearly 40% year-on-year, it said.

“It is clear that there has been a material shift in trade and whilst it is too early to predict with precision where a new post-COVID sales mix will settle, we must act now to reflect this change,” the retailer said.

Known for its off-the-peg suits and sandwiches enjoyed by office workers, Marks & Spencer has further been hit by customers working from home.

“An added blow from the current crisis is that the type of clothes we’re after has changed too, and not in M&S’ favor,” noted Sophie Lund-Yates, equity analyst at Hargreaves Lansdown.

“Consumers are more interested in leggings than a new office outfit these days,” she said.

In stores, sales of clothing and household items such as furniture slumped by 30% in the two months to August 8, Marks & Spencer said.

“The company should thank its lucky stars that it has a successful food arm,” said Russ Mould, investment director at AJ Bell.

“The next big test for Marks and Spencer will be the imminent launch of its supply deal with [online supermarket] Ocado for UK online food orders.

“A lot is riding on this joint venture being a success and further accelerating growth in Marks % Spencer’s food sales,” he said.

The retailer joins the likes of UK department store chains Debenhams and John Lewis, as well as pharmacy group Boots, in cutting thousands of jobs owing to fallout from COVID-19.

Official data last week showed that Britain’s economy shrank by one-fifth in the 2nd quarter, more than any European neighbor, as the lockdown plunged the country into its deepest recession on record.

Even though the UK economy is beginning to rebound as the government eases strict confinement measures – gross domestic product grew by 8.7% in June – analysts expect a surge in unemployment by the end of the year.

Finance minister Rishi Sunak plans to end in October the government’s furlough scheme that is paying up to 80% of wages for around 10 million workers during the pandemic. – Rappler.com