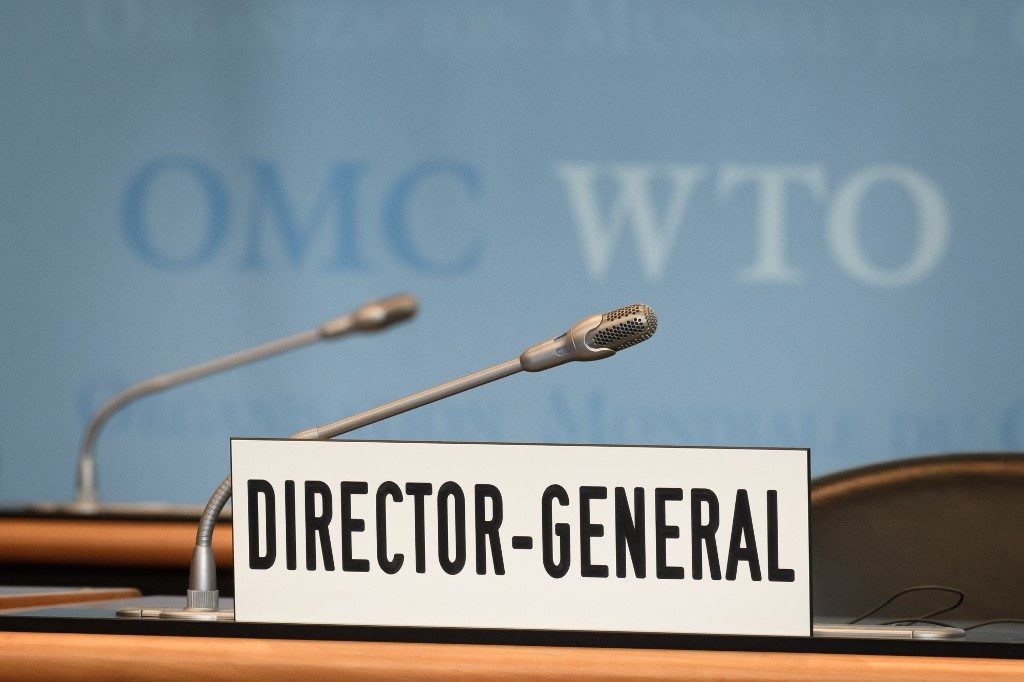 A picture taken on July 23, 2020, shows the empty seat and desk of the World Trade Organization director-general prior to a general council in Geneva, Switzerland. - The World Trade Organization's exiting chief acknowledged on July 23, 2020 that the body was facing "tremendous pressure", but insisted that a "big bang" reform was not the way ahead. (Photo by Fabrice COFFRINI / AFP)

The World Trade Organization (WTO) is postponing a meeting next week where members were to try to pick a new chief but with little chance of succeeding after Washington blocked the favored candidate.

The WTO’s 164 member states had been due to gather on Monday, November 9, to choose between two remaining candidates to head the crisis-wracked organization.

But the head of the selection committee set up to help with the process told members on Friday, November 6, the meeting would need to be postponed.

“It has come to my attention that for reasons including the health situation and current events, delegations will not be in a position to take a formal decision on 9 November,” General Council chair David Walker said in a communication first reported by Agence France-Presse (AFP).

“I am therefore postponing this meeting until further notice during which period I will continue to undertake consultations with delegations,” he added.

The WTO selection committee, made up of the so-called troika of ambassadors heading the organization’s 3 main branches, has held months of consultations with members towards finding a replacement for Roberto Azevedo, who in August stepped down as director-general a year ahead of schedule.

After gradually whittling down the initial list of 8 candidates, the troika last week tapped Nigeria’s Ngozi Okonjo-Iweala as the one most likely to obtain the needed consensus to take the helm.

But hopes that the final stage would be a simple rubber-stamping exercise were dashed when one country, the United States, announced it was intent on backing South Korean Trade Minister Yoo Myung-hee instead.

The WTO “must be led by someone with real, hands-on experience in the field,” the US Trade Representative said, in a veiled swipe at Ngozi, 66, who has served as finance and foreign minister, but never trade minister.

The US announcement threw the WTO leadership hunt into uncertainty.

In recent days, many observers have stressed member states had little chance of agreeing on a new director-general as long as Donald Trump, perhaps the WTO’s most fervent critic, remained in the White House.

Even as it looks increasingly clear that Joe Biden has won this week’s presidential election in the US, it is widely agreed that the issue will remain stuck until his inauguration on January 20, 2021.

A number of countries had called for the attempt to agree on a new chief to be postponed, wary of seeing a fruitless standoff play out.

“There is little point to have a showdown now that we know there is no consensus for one candidate,” a Western trade diplomat told AFP earlier this week.

“Better then to wait until changes might be possible.”

A Geneva-based European diplomat meanwhile hailed the decision after it was reached, insisting “this is a good thing.”

“It would be a good symbol of the clean break they’re going to be trying to draw with Trump’s more aggressive approach,” said the former Australian trade diplomat.

Ngozi herself has continued to voice confidence that, despite some “hiccups,” she will succeed in becoming the first woman and first African ever to head the WTO.

After the postponement of Monday’s meeting, her spokeswoman Molly Toomey told AFP that “Dr. Ngozi is very grateful for the WTO’s support and she’s ready to get to work as soon as possible.”

The postponed decision meanwhile means the global trade body will continue facing multiple crises – many sparked or deepened by the Trump administration – with no captain at the helm.

The global trade body has faced relentless attacks from Washington, which has crippled its dispute settlement appeal system – accusing it of unfair treatment – leaving much of the organization’s essential work in limbo.

It has also threatened to leave the organization altogether, and in July, as the WTO was scrambling to fill the void about to be left by Azevedo, Washington blocked the nomination of an interim director-general.

At the same time, the organization is trying to help its members cope with a devastating global economic downturn brought on by the COVID-19 crisis, and tensions sparked by the US-China trade war. – Rappler.com