CLOSED. Mannequins wrapped in plastic are seen inside a closed Victoria's Secret store at a shopping mall in Saint Petersburg, Russia, June 14, 2022.

MOSCOW, Russia – Western fashion brands are conspicuous by their absence at a gleaming new shopping center on the outskirts of Moscow – and customers say they scarcely miss them.

Following Moscow’s decision to send thousands of troops into Ukraine at the end of February, international fashion brands from Adidas to Zara have paused operations in Russia, while Nike is one of the handful to commit to a definitive exit from the market.

“I am neutral on this, whether we have them or not,” shopper Alexandra Moskunova told Reuters at the mall in Khovrino. “I can happily do without them.”

Another customer, Irina Stakhanova, said: “I only really liked H&M and another one that I can’t remember. It’s not that I need foreign things, I just need something that fits me and looks good, to lift the mood.”

There are few overt signs in the Russian capital that the mood needs lifting. Buskers sing and play, restaurant terraces spill onto the pavement and, as temperatures topped 30°C (86°F), Muscovites cooled off in a fountain near the Kremlin.

But on the capital’s most popular shopping streets, the closed stores of luxury Western brands stand out.

The TsUM department store, owned by Russian luxury goods group Mercury, is one of the last places Russians can get hold of authentic luxury items from international companies.

While Chanel’s Russian shops are closed, the brand has an outlet inside TsUM where a handful of watches are on display, although a member of staff, who declined to be named, said those were the last ones left.

“We only had what we’d already bought in stock,” she said. “We’ve had a lot of people. We’re the only place you can buy Chanel items.”

Chanel, like many others, in early March said it was pausing its business in Russia because of “increasing concerns about the current situation.” 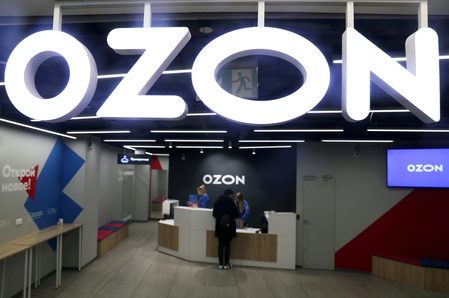 ‘To hell with sanctions’

While consumers may be ready to buy what they can, managers at the Khovrino mall said not everyone had managed to open in time for the official opening on June 23.

Nadezhda Tsvetkova, director of retail leasing, said at the mall’s opening some companies had not opened their stores because of “acute issues” with logistics and deliveries.

Viktor Chernykh, projects director at MR Group, the mall’s owner, said some tenants had had problems.

For instance, Russian consumer electronics retailer M.Video-Eldorado ran into logistical issues, he said, and will only open in early July.

“In March-April, like many on the Russian market, the company was mainly focusing…on developing the range of products and containing prices,” M.Video said. “We needed time to assess the prospects of various locations in the new economic conditions.”

Some companies have shied away from publicity for fear that drawing attention to themselves may land them on a sanctions list. Retail companies were noticeably quiet at Russia’s flagship international economic forum in Saint Petersburg this month.

A McDonald’s restaurant had been scheduled to open in the mall, Chernykh said, but the company’s withdrawal from Russia made that impossible. Vkusno & tochka, the Russian brand that has emerged after McDonald’s sold to a local licensee, will open, although it is not clear when.

The only foreign food chain present so far is KFC, owned by Yum Brands.

It has paused investment in Russia and suspended operations of its 70 KFC company-owned restaurants there, but the remainder of the 1,000 KFC outlets in Russia are run by independent franchisees, over which Yum has limited control.

Asked for comment, Yum referred to remarks chief executive officer David Gibbs made in May when he said it had suspended investment and development in Russia.

Crocus Group, which also operates shopping centers, has said Russian malls are “de-energized” and have lost around 30% of their footfall since Western brands left.

For all the problems, Tsvetkova was upbeat, predicting current daily traffic of around 7,000 people should increase to as much as 15,000 once the 18,300-square-metre center is fully operational.

Customers said some closures, such as that of French sports equipment retailer Decathlon on Monday, June 27, were sad, but they’d adapt.

“It’s a pity, of course,” Decathlon customer Magomet told Reuters. “To hell with sanctions. People have lost jobs, me included. But everything is fine, everything will work out. Go Russia.” – Rappler.com